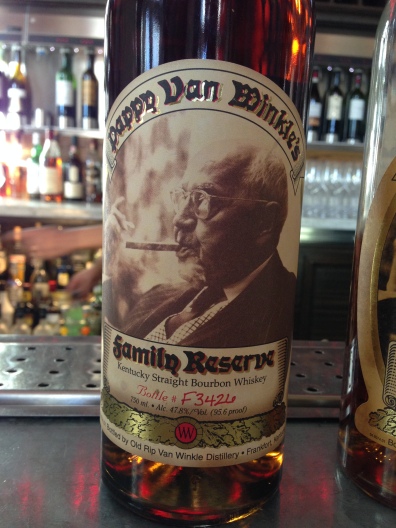 I am occasionally, like all professional types, required to go to Las Vegas a few times a year for various conventions in my industry. I’ve always hated Las Vegas. I once said to my old friend from Arkansas, Joel (*named changed to protect the guilty), that when I die, if I wake up in a casino and hear the bells and whistles of slot machines going off I will know I’m in Hell. Conversely, I remember mentioning that when I die, if I awake in a beer commercial, on a beach somewhere surrounded by bikini clad young women, that I’ll know I was in Heaven. As my only devout Christian friend, Joel was a little underwhelmed by my world view.

This last winter I was once again forced to go to Vegas for some training and then a customer convention. I was in Vegas so long I was beginning to worry I’d have to register in Nevada to vote. I was absolutely miserable. I was about to lose my mind when suddenly I got a text from my old friend from Arkansas, Joel, alerting me that he and his wife were heading to Vegas the next day. I met Joel over twenty five years ago when I lived for a brief time in Arkansas. I consider those my years in “exile”, like Dante when he was kicked out of Florence. While I was unhappy in Arkansas, the people were nice, and I made a friend for life in Joel. He’s a rock ‘n’ roll and bourbon guy just like me. Joel had a young family at the time, a wife and two young boys, but he always managed to find time to step out for a drink or two with his shiftless exile friend, namely me. He was the only person I knew who could quote scripture and Radiohead in the same conversation. I imagine it was a lot like drinking with Johnny Cash or maybe Dylan post-Christian period.

After I moved back home, Joel and I stayed in touch. At one particularly dark period in my life, Joel came to KC and we were out drinking. I was lamenting something and he asked me if I knew the story of Esau and Jacob. I remember saying, “Joel, the only biblical story I seem to recall goes something like this: “God said to Abraham, “kill me a son”/Abe says “Man you must be puttin’ me on/God say “No”, Abe say “What?”/God say “You can do what you want Abe, but next time you see me comin’ you better run/Abe says “Where you want this killin’ done?”/God says “Out on Highway 61.” My photographic memory of Dylan songs aside, Joel was not impressed. He went on to tell me about Esau selling his birth right and compared it to me. He said I was taking my eye off what was important. It was a good story and it’s stuck with me for years.

While I was excited to see Joel and his wife, Tiffany (*named changed to protect the innocent), they were getting in at a really early hour in the morning, but I was still required to attend the conference I was enrolled in. I had meetings scheduled. Joel and his wife were meeting with U.S. Customs at McCarren Airport and would be free by lunch. My advice to Joel was that he should nap, while I did my conference and we’d meet later in the early evening. My phone started ringing around noon, it was Joel. He was apparently ignoring my advice about the nap. I let the call, (then the calls as he kept calling every thirty minutes) go to voicemail.

Finally, around mid afternoon, I relented and answered the phone. “Kenneth, it’s time to roll… Tiffany is taking a nap, but I’ve stayed up, drinking beer.” This was a bad sign. I wasn’t going to be able to put him off much longer. I begged off for another hour but we made arrangements to meet at the Chandelier Bar at the Cosmopolitan. I ordered a Stella, which apparently irritated him even more. Once a decade Joel turned into what we both describe as “Hostile Joel”. This was heading that direction. “Bubba, when you’re in a bar like this, you don’t order a beer, you just tell the guy to mix you up something special with bourbon.” I was impressed that he actually ordered in that vague way and the guy brought him what looked like an Old Fashion. I killed my beer quickly and ordered “what the gentleman from Arkansas was drinking” but had to almost chug the Old Fashion as Joel had an odyssey of sorts in mind.

“Kenneth, I want you to take a journey with me. It’s going to be long and arduous, we’ll have to walk quite a ways, but in the end, we will find some treasure.” Who was I to argue, Joel was hammered and this sounded like fun. We left the Chandelier Bar and headed toward Caesar’s Palace. Joel seemed to know the way by heart. He had several gift shops and lobby bars he knew about on the route we were taking, so we were able to refresh our beers about every 100 steps. Outside the Caesar’s theater, we ended up hanging around in the gift shop. Elton John and Rod Stewart both do residencies there and they were selling CDs, t-shirts and other memorabilia. I held up a pair of leopard spotted lycra tights and asked if I should buy a pair and wear them the rest of the day. I have a vague memory of singing “Do Ya Think I’m Sexy” to the amusement of the shop clerk.

We ended up having to circle back to the Cosmopolitan when Tiffany woke up and called. She was hungry. At the rate we were drinking, I figured a little food couldn’t hurt. When we got to the Cosmopolitan, Joel announced that he was going to share one of Vegas’ greatest kept secrets, known only to the initiated. I shrugged my shoulders and smiled. I saw a flash of Hostile Joel when he said, “I don’t think you’re prepared for this. You’re not worthy of this kind of insider information…you’re not showing the proper reverence.” I thought of Esau, I needed to keep my eye on the prize. I tried to act contrite. We ended up walking down an unmarked hallway and discovered a hidden pizza joint and it was awesome. We took the pizza up to the hotel room and met Tiffany. Joel quickly bolted for the lobby to grab a six pack of beer, since he considered the mini bar prices to be outrageous. I’ve never really known Tiffany that well and was worried about what to say, when she plopped down on the couch across from me in the living room, and blurted out, “You know I always hated you back in Arkansas.” Jeez, first Hostile Joel and now Hostile Tiffany. Where was this evening going?

“Joel would disappear on weekends to go drinking with you. I couldn’t stand you. Of course, I didn’t know you back then, and knowing what I know now, I think you’re kind of a funny guy. I wish I’d known back then, what I know now. I was just a young mother and you were a threat. But, I’ve learned a lot since then…” she said wistfully. I couldn’t help but wonder what she’d learned that had changed her opinion of me. I always got this from the wives and girlfriends of my pals. I was the single guy. It’s so much easier to get pissed at the drunken friend than the boyfriend/husband, and I was always the target. I was hanging on every word, hoping for some real wisdom, when drunken Joel burst back into the room with a six pack. Saved by the drunken bell it appears.

Finally, after hours of drinking and eating pizza, we managed to make it over to the Venetian. One of the bars off the lobby was apparently the location of Joel’s promised “treasure.” Unfortunately they were doing a private dinner for Home Depot or some other retail outlet. Joel bribed the hostess and we slipped into the bar. I quickly hit the bathroom and when I got up to the bar, I realized why we’d taken this long odyssey in the first place. Sitting on the bar, in front of Joel, were two glasses and a bottle of the infamous, rare and hard to find Pappy Van Winkle Bourbon – Do I think you’re sexy, God damn right I do. The bar actually had the 15 year, the 20 year and the 23 year bottles. The 23 year was $250 a shot, so that was out of the question. We did a shot of the 15 year followed up by a shot of the 20 year. Bourbon, served neat. I was in Bourbon Heaven. I’d never had Pappy Van Winkle but now I am a big fan. It may be the best bourbon I’ve ever had. The difference between the 15 year and the 20 year was amazing. I can only wonder in awe what the 23 year was like. It had been a long, drunken, crazy day with Hostile Joel, but it was worth every moment to taste the nectar of the Gods… Pappy Van Winkle. There were many moments during the day I thought of bailing, but unlike Esau, I hung in there… Although I must admit, I wish I’d bought the Rod Stewart leopard-skin tights. It would have been a great picture for Instagram…