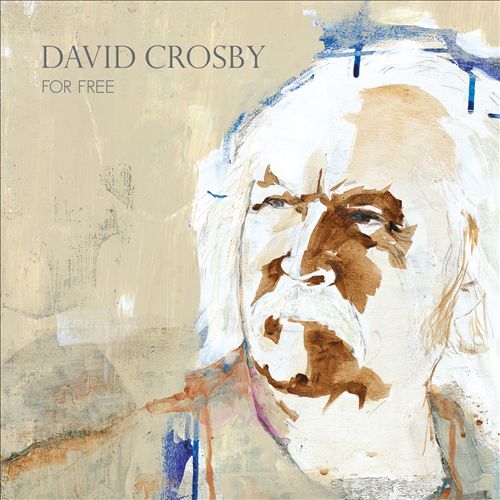 I started this year deeply immersed in Neil Young’s Archives, Volume II covering his career from 1972 to 1976. Then I found myself wildly obsessed with Crosby, Stills, Nash & Young’s Deja Vu: 50th Anniversary. The outtakes and stuff that didn’t make the album sowed the seeds to the beginning of all of their solo careers. Well, at least for David Crosby, Graham Nash, and Stephen Stills. I think it’s true Neil always guarded his best stuff for his solo albums but I’m getting off topic. Right now I’m similarly enraptured with David Crosby’s new LP, For Free. I guess for me 2021 is just a CSNY, Laurel Canyon, California, folk-rock haze. I guess I should have gone all in on the purchase of the buckskin fringe jacket, tie-dye t-shirt and bell bottom jeans my wife forbade me to wear. The album cover for For Free was painted by none other than Joan Baez which only accentuates my whole vibe these days…when I’m not complaining about the awful new Gun N’ Roses song…

David Crosby is in the midst of what can only be described as a career renaissance or a creative peak that has lasted several years and counting. He’s released five albums in the last seven years, a Van Morrison-ish pace. If you’d told me that this far down the line it’d be Crosby’s records I’d be excitedly awaiting and not Neil Young’s, I’d have scoffed. Don’t get me wrong, I’ve always dug David Crosby but from 1971 to 2013 he only released 3 solo albums. Over those 42 years that’s average of an album every fourteen years (for all you math-challenged folks out there). And admittedly during those years there were some legal issues fueled by drug use… drugs start out as fun, turn into fun with trouble and end with just trouble… Of course during those years he also released a number of duo albums with his erstwhile friend Graham Nash and a few with CSN and occasionally Y. There are some who say Crosby is better in a band setting. He was a founding member of the Byrds although he was eventually contentiously fired. He did seem to thrive in the configurations of Crosby, Stills, Nash and/or Young and certainly flourished in his recordings with Graham Nash. I even dug his CPR stuff with Jeff Pevar and James Raymond, his son who he gave up for adoption but reunited with later in life. But in truth, I actually dig Crosby solo, front and center if you will. Check out “Drive My Car”…a truly great tune.

This whole creative burst started with 2014’s Croz produced in part by his son James Raymond. That was a surprisingly solid record, his first solo disc in 21 years. He then teamed up with Micheal League from Snarky Puppy and vocalists Becca Stevens and Michelle Williams for the more raw and acoustic Lighthouse in 2016. Crosby who was used to laboring over a record for years was approached by League who asked if he wanted to try and do something more immediate like Crosby’s masterpiece If I Could Only Remember My Name. I think they recorded Lighthouse in like five days. That gave Crosby sort of a dual career path. He’d do an album with Raymond at the helm – a more polished, focused studio effort – and then he’d jump back into the League/Stevens/Williams camp that he calls “the Lighthouse Band” and do something more raw-boned. The Lighthouse Band really connects with Crosby’s folky roots to my ears. I really love the harmonizing the vocalists do. After the Lighthouse album, Crosby returned to the James Raymond-helmed band and in 2017 released Sky Trails an LP that just knocked me out. What a gorgeous album. That’s the one that got me onto the Crosby bandwagon. I didn’t write about his League produced/Lighthouse Band follow up, Hear If You Listen because for some reason I was led to believe it was merely a live album. It’s amazing. The version of Joni Mitchell’s “Woodstock” on that LP rivals Joni’s original… and possibly CSNY’s version. Crosby produced Mitchell’s debut LP, and it seems he covers a track of hers on every LP he does now.

And so now, Crosby has returned to the James Raymond-produced Sky Trails side of his career and released For Free. His voice, while slightly weathered by time is still an incredible instrument. And Raymond’s production for this album is a perfect environment for Crosby to soar as a vocalist. James Raymond has a solo writing credit on three of the tracks and they’re all stand-outs. At this stage of his career Crosby sounds like a wise and wizened Buddha sitting on the side of a mountain, laying out melodic wisdom. On Here If You Listen he sang and ruminated on subjects from Zen to mortality. The lyrics verge on poetry. For Free, like Sky Trails before it, is a much more polished and (dare I say) pop-oriented record (at least to a degree). Crosby has always had a fascination with jazz and you hear that vibe sprinkled throughout the album. It’s not jazz but it’s jazzy. He certainly pulls that sound off better than Sting used to try and do. While I dig the Lighthouse band, I’m more into the Croz/SkyTrails side of the equation. While unlike previous records there’s nothing I’d call overtly political on this record – despite Crosby’s reputation as a political firebrand – the album does have a feeling of coming out of the darkness and heading toward the light. That’s a feeling we can all get into these days. The band on For Free includes, as usual, James Raymond on various instruments (what can’t he play?), sax player Steve Tavaglione, drummer Steve DiStanislao among others.

The opening track, which is also the first single, is “River Rise” a duet with Michael McDonald. Yes, I’ll admit this harkens back to the Doobie Brother’s “Yacht Rock” of the late 70s but it’s a great tune. It’s a catchy damn tune and amazingly buoyant. McDonald used to sing with Steely Dan and I think that’s really the vibe Crosby is going for. The first track on Sky Trails, “She’s Got To Be There” had a Steely Dan sound so that makes sense. “River Rise” quickly fades into the second track, which may be my favorite song, “I Think I.” I love the chorus, “I think I found my way…” If only I could too… Crosby’s vocal is impassioned. Speaking of a Steely Dan vibe, another stand out is “Rodriguez For A Night,” which is actually written by Steely Dan’s Donald Fagen. It’s the funniest track here, full of angels, drugstore cowboys and the titular outlaw. I think I speak for all of us when I say, “I’d sell my soul to be Rodriguez for a night.” That song sounds like an outtake from Katy Lied. It also recalls, for me, Crosby’s own “Cowboy Movie.”

Crosby, as he’s done on several albums in a row now, covers a Joni Mitchell song. It’s the title track, “For Free.” He’s accompanied beautifully by Sarah Jarosz. He’s done this track twice before – once with the Byrds and once on a live CSN album – so this makes his third try. I’m guessing he re-recorded the song because this is a great vehicle for Jarosz and he to sing together. It’s a great song about a street musician who plays basically, “for free.” He plays merely for the love of playing. “Secret Dancer” is a beautifully sung track about a robot who becomes sentient and then, horrified by human’s history of suffering, dances it away. Someone has been watching Ex Machina. “The Other Side of Midnight” is a beautiful James Raymond song that may be about dancing with Mother Nature late at night…

The last three tracks on the album make for quite a close. The intensity of the album really kicks up a notch. “Boxes” a meditation on time and it’s passing and it is simply wonderful. “There’s love in these boxes.” Following that is “Shot At Me” about a veteran returned from the war. Finally, the track that ends the album and might be the most emotionally effecting is “I Won’t Stay For Long.” It begins with Crosby’s voice, a piano and muted horn… which really sets the mood. This one is also written by James Raymond and it’s a stunner. It’s poetic, emotional and the perfect track to end on. “I’m facing a squall like of a thousand-year storm, I don’t know if I’m dying or about to be born, But I’d like to be with you today.” Heavy ruminations man.

This may be my favorite of Crosby’s late career albums and I really loved Sky Trails so that’s saying something. These latter day David Crosby LPs are the kind of records that B&V was built to highlight. This certainly isn’t an album you’re going to play at your Labor Day BBQ party. However, it’s a perfect, late night, sitting out on the deck with a tumbler of something dark and murky when you just want to get lost in some high quality melodies and music. This is one of the best albums I’ve heard all year.

3 thoughts on “Review: David Crosby, ‘For Free,’ The Sublime New Album – One Of His Best Solo LPs”