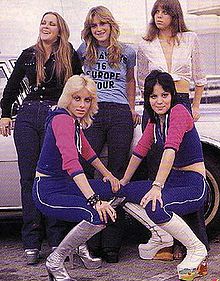 One of the great things about being married to the Rock Chick is the enormous amount of music she’s turned me onto over the years. Among other bands, early on she turned me onto an all female band, The Donnas. I had never even heard of the Donnas until the Rock Chick put on the LP “Spend The Night” one night and man, these chicks “rawked!” Their song “5 O’Clock In the Morning” was on high rotation at the house for quite some time and boasts one of the most hot-shit guitar solo’s you’re ever going to hear. All female bands were somewhat of a novelty for me when I was growing up. In fact, there wasn’t really any female band I paid much attention to when I was growing up. There was Heart (who had 2 women and 3 men), but after 1980 they went all slick pop and lost my interest. “Barracuda” by them was a descent track. Of course Heart had to suffer through spurious rumors of lesbian incest. Chicks never got their due back in the day. Most of us owned a bunch of heavy metal and hard rock albums and then one or two Fleetwood Mac/Stevie Nicks albums and that was the extent of what we knew about “chicks who rock.”

The Rock Chick has been extolling me to write a post on “Chicks Who Rock” for quite a while now. I had to tell her, beside reminding her of her lifetime reading ban of B&V due to undue criticism of my sentence structure, that I don’t take requests at B&V even if you are sleeping with the writer. That said, the Donnas’ “5 O’Clock In the Morning” popped up on the iPod shuffle the other day and I started doing some reading about them on the inter-web. They cited a band called The Runaways as one of their major influences. I knew I’d heard of The Runaways but couldn’t quite place them. Suddenly it occurred to me that when Joan Jett was inducted into the Rock And Roll Hall of Fame, she mentioned that she’d got her start in The Runaways. I had always thought The Runaways were like Menudo, with interchangeable parts… perhaps I was wrong. Intrigued, I knew I had to do more musical spelunking.

Another great thing about being married to the Rock Chick is that she’s willing to dedicate an entire evening to listening to music. The same evening I put on Big Star’s “#1 Record” we listened to an assortment of new music including The Record Company, The Shelters and yes, The Runaways. I figured The Runaways’ music, since they were put together by skeezy producer Kim Fowley as a novelty act, would be awful. I was very pleasantly surprised. These chicks rocked hard with a punk sensibility that I had not expected. Even the Rock Chick dug The Runaways’ first album and she has very discerning taste. Clearly more research was necessary.

I was too young for The Runaways. They put out their first album in 1976 when I was still collecting baseball cards and only lasted through roughly 1979. They were formed around the core members of Joan Jett on rhythm guitar and some lead vocals, Sandy West on drums and of all people, Lita Ford on lead guitar. When I found out Heavy Metal Maven Lita Ford was in this band with Joan Jett I knew I was onto something. They went through a number of bass players including a chick who ended up in the all female pop band The Bangles. I never had much use for the Bangles… so I consider that the one blight on the Runaways’ otherwise spotless pedigree. For their first two studio albums The Runaways also had Cherrie Currie on lead vocals. Apparently there have been documentaries and biographical movies made about these gals, but I’ve never seen any of them. I understand there was a lot of conflict and drama around the band – but what band doesn’t have conflict and drama. It sounds like this Kim Fowley guy who was their producer and manger was pretty rapey around these young teenage girls. The back story all sounds pretty awful. However, I’m not here to talk about all of that. I just like the music. They never really caught on in America but were, as the cliche goes, “big in Japan.”

The Runaways music is, as I mentioned, a blend of hard rock and punk. These are sleazy songs about misbehavior. These are the dirty girls my mother warned me about and I soooo loved from adolescence to my thirties. Oh, who am I kidding, I still love the bad girls. The debut album is probably the pick of the litter, simply titled “The Runaways.” “Cherry Bomb” was “the hit” that they are most remembered for. Its all dirty riffs and Lita Ford’s screaming leads. I’ll admit some of the lyrics are juvenile but that’s what I’ve always loved about rock and roll. “You Drive Me Wild” has a dirty riff with possibly Lita’s best guitar solo. “Is It Day Or Night” a question I’ve often asked myself when I wake up, is a big loping rocker. They even cover Lou Reed and the Velvet Undergrounds’ “Rock And Roll” with a lot of cowbell. Oh my God is that song so 70s. “American Nights” is an anthem that should have been played all summer in every small town in the U.S. The album ends with a baffling mini-opera kind of song, “Dead End Justice” which utterly lost me. Other than that misfire, “The Runaways” is dirty, rock and roll fun.

The second record, and Cherrie Currie’s last record with the band before going solo was “Queens Of Noise.” They start off right where they left off on the debut record, all hard rock and dirty girl lyrics. The title track comes from a lyric on “American Nights.” They sing in the chorus, “do whatever you want to me.” God, I love these girls. “Take It Or Leave It” is one of my favorite tracks on this record, sung by Joan Jett, and is cowritten by none other than Jagger/Richards. I have to assume Mick was sniffing around the girl band which makes me love the guy that much more. “Neon Angels On The Road to Ruin,” and “Born To Be Bad” continue the basic Runaways themes. I will say the song “Midnight Music” is a more sophisticated tune. “California Paradise” which boasts some interesting drumming and “Hollywood” are better “California sunshine” songs than anything those pussies the Beach Boys put out. “Johnny Guitar” the closing track has some of Lita Ford’s most epic guitar soloing of her career.

The third record, “Waiting For the Night,” I really enjoyed despite the exit of Cherrie Currie. I like “Waiting For the Night” almost better because Joan Jett does all the singing. I just dig her voice more. You could tell the band was pulling in two different directions, punk vs hard rock. Song like “Little Sister” and “Wasted” feel more punky to me than hard rockers. And, “Fantasies” and “Trash Can Murders” are more metalish music than punk. “Gotta Get Out Tonight” has a poignant urgency as does “Wait For Me.” This is all very solid rock and roll. “School Days” has a break neck riff that Aerosmith would be jealous of.

Although they did put out another studio album, by “Waiting For the Night” The Runaways were a spent musical force. Inter-band struggles finally tore these guys apart. Apparently Joan wanted to go more punk with Sandy West and Lita Ford lining up against her, pushing for a more heavy metal direction. They split ways for the oldest reason in the rock and roll books – “creative differences.” Lita went on to be an 80s Heavy Metal Chick. Sandy West had her own band but alas succumbed to cancer in 2006. Cherrie Currie, whoever everyone thought would soar as a solo artist, never really found success. And Joan Jett, well, everybody knows that story. Had I known about The Runaways when I wrote my post about bands who had members who went on to bigger fame, I’d have included these guys. The Runaways are more than a novelty band, they’re a guilty rock and roll pleasure. At the very least everyone should hear their debut album.

Chicks who Rock are very, very powerful… take my word for it. I married one.

One thought on “Artist Lookback: The Runaways, A Guilty Rocking Pleasure”