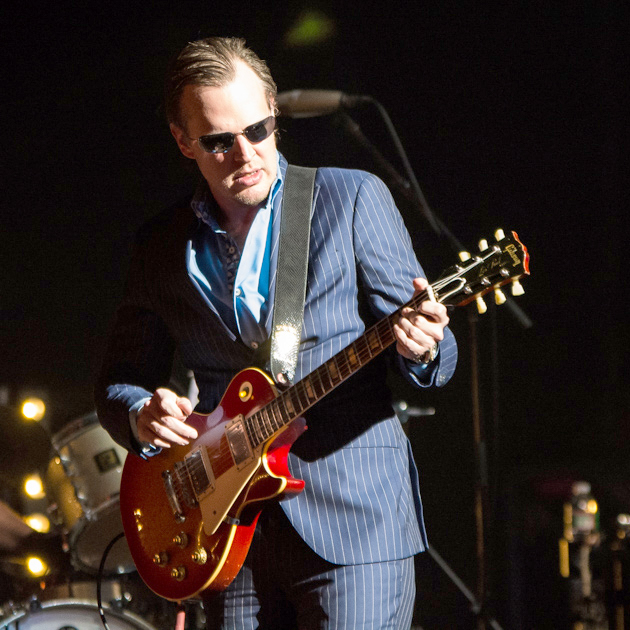 *image shamelessly stolen from the Internet

My apologies to my readers, that I haven’t been posting as much or as regularly lately. I was on vacation with the Rock Chick in the Dominican Republic all of last week. I hadn’t been on a vacation in 2 years and finally the Rock Chick laid down the law… the next thing I knew I was soaked in rum and sun screen. I will say the DR is beautiful and the people are warm and welcoming. If anything goes astray with the Rock Chick my next wife will certainly be Dominican… The weeks prior to my vacation my Corporate Overlords had me traveling all around the U.S. from Herndon, VA to San Francisco to Salt Lake City… the grind of the road, such is life. As a result, I haven’t had much time to devote to BourbonAndVinyl. And let’s admit it, it’s been a shitty year for music thus far in 2017.

As luck would have it, Joe Bonamassa brought his band to Kansas City last night. Let me be the first to say, WOW. I have converted to the church of Bonamassa.

It was my buddy Stormin’ who first turned me on to Bonamassa. Stormin’ and our mutual friend Matthew got heavily into the blues a number of years ago. Matthew tried to turn me onto Tab Benoit (sp?). He was ok… but then Storm told me to buy the Bonamassa album, ‘The Ballad of John Henry.’ I must say, Joe clicked for me a lot more so than Tab did. The last time I was in Denver, Storm played me another Bonamassa album, whose title escapes me and I was again blown away by Bonamassa’s virtuoso playing. Then I saw him on VH1 on a special from Red Rocks playing Muddy Waters tunes. That’s when I knew I was a fan. If you haven’t seen that concert film, I highly recommend it.

It was a few months ago, my friend Drummer Blake reached out and said, “Let’s go to Bonamassa.” I jumped at the chance. Once again, a little over year later, I found myself nursing a martini in the Drum Room awaiting the Four Horsemen… Although I must admit it was The Four Horsemen of the Salinapocalypse – Slight Return, as not all 4 of them were present last night. There were six of us in total and we were drinking like escaped convicts before the show, which is always good concert prep. I always ask myself before a show, “What would Hendrix do?” It was truly great to be in the presence of the Salinapocalypse again. I must say, one of the Horsemen, Spalding (name obscured to protect the guilty) is a rather finicky food guy… even ordering drinks was an ordeal. As a result of all that we didn’t skip out of the Drum room until 15 minutes prior to the show.

The line to get into the beautiful Midland Theater – and not enough can be said about what a beautiful, old theater the Midland is – was around the block. Apparently the draconian security measures to get in the theater were causing unusual delays. If we have to stand out in the cold for 45 minutes to see the blues, the terrorists have already won, my friends. Instead of being 15 minutes early and being in our seats for the start of the show, to my surprise Bonmassa started promptly at 8pm. We missed the first 20 minutes of the show, standing in the cold waiting to get through the fucking metal detectors. A couple of us peeled off and ducked into a bar to miss the frenzy. I would have thought a stage hand would have leaned into the dressing room and told Joe, “Say man, you might wanna give it 30 minutes…” Que sera, que sera.

I quickly rushed through the darkened and packed theater to my seat in the 14th row… my thanks to the niece of one of the Salinapocalypse for getting us great seats… and spotted Joe on stage. I was taken aback by how much he looks like Agent Smith from the Matrix movies… I was ready for him to say, “What do you want to hear next Mr. Anderson…” He had a great backing band that included Anton Fig of Letterman fame on drums and Reese Wynans from Double Trouble on keyboards. He had a small (2) horn section, and 2 back up singers from Australia who moved continuously though the show, giving the players a nice visual counterpoint.

And what a band they were. As Joe himself said, these guys were nominated for a Grammy. They were tight and amazing all night. I loved the constant interplay between the different instruments all night long. And what can I say about Joe’s guitar playing. The man is truly one of the best I’ve seen. He melted our faces off, in a good way. Drummer Blake claims he is the absolute best guitarist out there. I’m not sure I’m ready to say that yet, but the fact that Bonamassa played Clapton’s “Pretending” and just owned it, goes a long way toward making his case. They did a great version of “Never Make Your Move Too Soon,” which I’ve always associated with B.B. King and it was scorching. The most impressive moment for me, personally, was a cover of Zeppelin’s “How Many More Times.” It takes some stones for a guitar player to rip through Clapton, B.B., and Jimmy Page covers and hold his own.

The guitar solo’ing was simply other worldly. Joe can bend a note around a corner. And, I’d be remiss if I didn’t mention the plethora of beautiful guitars the guy played, although even I have to admit the paisley one was funny looking. At one point after shredding through a guitar solo, Joe brought it way down and was quietly playing some slow, bendy notes, and someone in the crowd yelled, “We love you Joe!” It was a great moment. The rapport he has with his audience and their allegiance called to mind the crowd on B.B. King’s seminal live LP “Live at the Regal.” There is a genuine bond there you don’t see as much these days. The guy just killed it on guitar and he was able to do that for 2 and half hours… Just a fantastic show. I highly recommend anybody near a venue he’s playing at, get out to see him as this tour is winding down…

After the show, the Salinapocalypse and I slipped into a tavern across the street from the show to debrief. Everybody was impressed with the band. The conversation eventually turned toward the subject of whether Rock was dead. The concern is that there aren’t enough young kids out there playing the guitar, or learning any instruments. It’s all electronics now, DJs and rappers. I was moved at how much genuine concern and, yes, love of rock and roll was being expressed at that table. If you’re out there and you’re young, there’s still time. Pick up and instrument and as Ronnie Lane’s dad used to say, “then you’ll always have a friend.”

I’m not sure what Rock And Roll Fate brought me into the company of the Salinapocalypse crowd, but I can say, I’m sure glad it did. Without Drummer Blake I’d have missed the Joe Bonamassa show and that would have been missing out on something really special.

Until next time, Cheers!

3 thoughts on “Concert Review: Joe Bonamassa & The 4 Horsemen of the Salinapocalypse Slight Return”