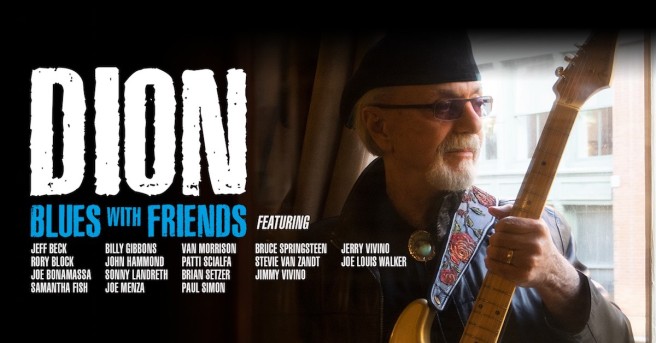 I texted a friend of mine last Saturday, Drummer Blake. I wanted to alert him to a new song “Blues Comin’ On” by Dion that features Joe Bonamassa. Blake and I had seen Bonamassa a few years back (Concert Review: Joe Bonamassa & The 4 Horsemen of the Salinapocalypse Slight Return). I knew he’d like Bonamassa’s guitar work on the track. Blake is nothing if not a big guitar fan, he’s seen Yngwie Malmsteen for God’s sake. He responded the same way I did a few years ago when I heard Dion singing “New York Is My Home” with Paul Simon, “Dion is still alive?” Indeed he is, and he’s got the blues.

New York’s (or more specifically the Bronx’s) Dion DiMucci known simply by his first name was a big star in the late 50s/early 60s. He started off with his doo-wop back-up group the Belmonts but later went solo. He had a string of monster big hits including “Run Around Sue” and “The Wanderer.” He was big in that time period between Elvis Presley’s entrance into the Army and the British Invasion. His music occupies that same era as Sam Cooke’s prime. Since he’s from the Bronx the man is a huge influence for  many of the singers from New York who followed after him. Namely, Lou Reed, Paul Simon and Bruce Springsteen have all cited him as an influence. That’s pretty good company.

The guy has quietly had quite a career. It’s like he’s a smart, singing Forrest Gump. As I mentioned, he was big on the doo-wop, pre-British Invasion scene. His career lost some steam and he returned later in the 60s with earnest protest music like “Abraham, Martin and John.” In the 70s he recorded an album with Phil Spector like Leonard Cohen and John Lennon did. He even had a religious period like Bob Dylan. He may have left the white-hot spotlight of stardom, but he has always been around doing rockstar stuff.

My introduction to Dion came when I was a child. I found out about Dion’s music from the most unlikely of places, my mostly non-musical father. When I was a wee lad in grade school I had to share a room with my little brother. My parents weren’t even cool enough to provide bunk beds. We had two single twin beds crammed into different corners in a small room, like boxers in neutral corners. I think back about that now and about my brother and can’t help but think, that poor bastard had to share a room with me. We had a small black-and-white TV that was my dad’s when he was in the Army with the rabbit ears antenna so we could sort of watch snowy television. My brother also had a record player. And at some point, he rescued a small metal-wire rack of singles that my father had collected before he got married. Apparently marriage ended any infatuation with music that he’d had prior.

There were some amazing gems in that pile. He had Elvis’ “Jailhouse Rock.” He had several Ray Charles and Johnny Cash singles. These records didn’t even have the paper dust sleeves on them, just naked vinyl. I don’t know whatever happened to those 45s, they were probably thrown out but there was probably some stuff worth some money in there, but I digress. Hidden in that pile of 45s was none other than Dion’s great song, “The Wanderer.” I don’t remember if dad had “Run Around Sue” but I have a feeling he did. But the song I just fell in love with was “The Wanderer.” I was just a kid but the lyrics just grabbed me, “I’m the type of guy who’ll never settle down, where pretty girls are, you know that I’m around.” Perhaps it was foreshadowing of how I was to live my 20s and early 30s…I should probably have worked that out with a therapist. I mean, I hadn’t even hit puberty and I was dancing around lip-synching “they call me the wanderer, yeah the wanderer, I roam around, around, around.” Emotional gypsies, apply here. Years later as adults my brother bought me that 45 for a birthday present. He had to listen to it every time I did, it was his record player so he knew how much I loved it.

Other than that single my brother bought me, which was placed in the shelves up by my albums, I forgot all about Dion. If asked about him I’d probably have guessed after his career cooled off he’d died of booze and drugs. Or moved back to the Bronx and become an electrician or a contractor or something. Maybe he had some kids and shows up at weddings and nostalgia shows and stuff like that. I figured if alive he probably lived in Florida where he yelled at kids for getting in his yard. I was completely unaware that he’d kept recording and performing music. It wasn’t until approximately four years ago that I rediscovered he was even alive when he released his haunting duet with Paul Simon, “New  York Is My Home.” I figured it was a one-off and never discovered there was an entire album by that name.

A few months ago I started to see advertisements and social media stuff about his upcoming album, Blues With Friends. It’s a guest-star laden album with a who’s who of guitarists and artists joining him. That’s probably why it’s getting the press it does which is great but it’s too bad that as I discovered, starting in 2000, he’s released a string of really great albums, mostly centered on the blues that should have garnered more attention. I really like 2011’s Tank Full of Blues. Its exactly as advertised, laid back blues. When I finally went back and listened to the entire album New York Is My Home I discovered another fabulous album. Hell, I even dug Bronx In Blue where it’s blues stripped down to just acoustic guitar and Dion’s voice, the way Muddy Waters used to play in the early days. I recommend perusing his catalog from Deja Nu forward. Although I will admit his propensity to be photographed w/ a beret on and a guitar in his hand can confuse you as to which album you’re listening to.

As I said this is a guest star laden LP. Usually those can really lack consistency. The guest artists styles tend to overwhelm the guy whose album it is. That’s not the case with Blues With Friends. There’s a couple of reasons this album hangs together so well. First and foremost, is Dion’s voice. He’s in his usual fine vocal form here… the guy has lost nothing vocally. And for the most part Dion is the only one who sings on the record. Since these tracks mostly aren’t duets, the continuity is there. Also, when you stay in the genre of blues you can play with a lot of different people and still maintain a consistent sound throughout.

There’s a ton to like on this record. “Blues Comin’ Down” with Bonamassa kicks things off and it’s great. It has a very tasty guitar solo. I really love the track with Brian Setzer on guitar, “Uptown Number Seven,” it just chugs along like a train and you know how I love train songs, “Playlist: The B&V 50 Favorite Songs About Trains – “that lonesome whistle blows…”). The guy who I’d never heard of who may have my favorite moment on the record is Sonny Landreth the “slydeco” (slide guitar played in the zydeco style) guitar wizard on “I Got the Gun.” Dion vibes on his energy. Dion and Samantha Fish tear the roof off the joint on the most upbeat track here, “What If I Told You.” “Way Down (I Won’t Cry No More)” with Steve Van Zandt on lead guitar is a treat. Van Zandt does so many things it’s easy to forget what a great guitarist he is. Dion conjures additional great moments with John Hammond and Billy Gibbons.

It’s not all electric blues. He does change it up a bit. There’s another duet with Paul Simon that I just loved, “Song For Sam Cooke.” I love Sam and this is a beautiful tribute song, complete with the “Chain Gang” backing vocals. Simon and Dion sing so well together they should form a duo. They could call it Simon and Dion-funkel, they’d make a fortune. “I Got Nothin'” finds Dion duetting with Van Morrison and I love that track too. Van sounds so much more laid back on this track than on his own stuff. Joe Louis Walker plays the lead on that track and it’s just pure blues heaven. “Told You Once In August” is a stripped down acoustic blues number with John Hammond on guitar with Rory Block on a harmony vocal, anther great track. “Hymn To Him” has Springsteen and his wife Patti Scialfa. Springsteen plays acoustic but Scialfa steals the show with her wordless backing vocals. She compliments Dion so well. The track almost has a religious vibe…hence the “Hymn” in the title.

As I’ve confessed before the blues are my Alpha and my Omega. All of the great rock and roll that I love is founded upon the roots of the blues. To see an artist with Dion’s history take up the blues and record yet another in a great string of albums just reaffirms my faith in the blues. Dion has always been a great vocalist. Everyone needs to check this disc out. It’s perfect for all you wanderers out there.

Cheers. Take care of each other!