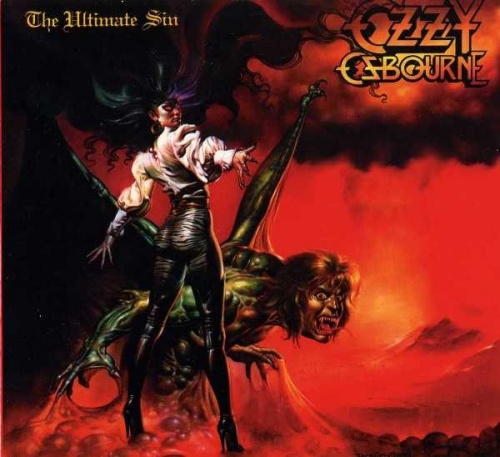 It’s rare that you find any “Universal Wisdom” at an Ozzy Osbourne concert. Somehow, in the 80s, I managed to do so.

It was 1986, right in the heart of the 80s, when a group of friends and I loaded up in the car and drove from Manhattan, Kansas down to Wichita to see the Prince of Darkness, Ozzy Osbourne, in concert at the Kansas Coliseum. We were especially excited to see the Oz-man in Wichita because the arena had “festival seating,” where you show up, line up at the door, and when the doors opened, you sprinted as fast as you can to get a seat near the stage, or better yet, get to the open area in front of the stage. I saw Van Halen in Wichita once and actually stood right in front of the stage, hanging on to it for dear life. God Bless Eddie Van Halen, but as usual, I’m off topic. The opening band for Ozzy was some dark metal band we’d never heard of, Metallica, but that’s another topic. We didn’t fight to get down to the stage but found some nice seats on the lower deck, really close to the stage.

This being the 80s there were a lot of stimulates among the pirate crew I’d journeyed to the concert with. We were drinking a lot of beer that day, which could be said of most of our days at the ol’ University. As the old song goes, “for it’s not for knowledge that we came to college but to drink beer while we’re here…” We had a rule when road tripping, not a very smart one, that you had to have a six pack for each person in the car at all times. (Don’t Drink and Drive kids, it’s a bad idea.) I was with several herbal enthusiasts as well. I’ve always been a fan of dark, murky fluids and was never a smoker but I’d probably list myself as a “pot sympathizer.” You enjoy your vices, I’ll enjoy mine. For some reason we had a bunch of black beauties with us. I was never big into stimulates, but speed was always prevalent at college, especially during finals. If you needed to stay up cramming, rather than drink a pot of coffee, take a black beauty or a “No Doze” and zoom, you’re up. Soon we realized it was fun to take one with beer – one foot on the gas, one foot on the brakes. We were so riled up by the heavy metal and speed, we were on our feet, high-fiving like amateurs and sloshing beer all over. Even before Ozzy came on, the poor high school kids in front of us politely moved off to find safer seats. We were young Vikings on a quest for Heavy Metal Valhalla.

Finally, after playing louder, faster, louder, faster these dour guys calling themselves Metallica (how did we not realize what we were seeing, perhaps it was the beer?), left the stage and after a short intermission to remove Metallica’s white-cross cemetery stage set, a giant Ozzy Ghoul descended from the rafters. The stage prop was designed to look like the cover of his latest album, “Ultimate Sin.” The arms/wings of this Ghoul opened up and sitting on his throne was Ozzy, in all his glory. He leapt out of the chair, launched into “Bark At The Moon,” and didn’t stop moving all night. We went bonkers. I think at one point I may have actually barked in the general direction of the moon…Ah, youth.

Ozzy had had an up and down decade. He’d started his surprisingly successful solo career with the legendary guitarist Randy Rhodes but then Randy was killed in a freak airplane accident. Ozzy had finally recovered and pulled a new band together with Jake E. Lee as his new lead guitarist. Jake was with Ozzy that night and while he was no Randy Rhodes, he held his own. The man could “shred” as the kids say. The song “Shot In the Dark” was our favorite and we went appropriately insane when Ozzy played it. “Never Know Why (We Rock)” was another highlight because let’s face it, Ozzy was right when he sang “they’ll never know why we RAWK!” By the time Ozzy played “Paranoid” as the encore, we were certain we’d reached that Heavy Metal Valhalla we had been seeking.

We slowly began to file out of the Kansas Coliseum to find the car when, in the midst of the exiting metal fans we saw a giant cross. I couldn’t help but wonder what the heck was going on, was this more Ozzy theater? It was then that I heard the Preacher’s voice over the loud speaker, decrying the “Evil” that we had just been a part of. The 80s were a weird decade. Ronald Reagan was President and it was “morning in America.” Out of nowhere Heavy Metal and hard rock came under siege from religious groups. Ozzy and his fellow Metal buddies, Judas Priest had been sued for their dark music being wrongly considered to cause suicides. You had the PMRC, the Parents Musical Resource Committee (or was it Center), led by the uptight Tipper Gore who was attempting to censor rock lyrics. For me this all reached it’s apex when my mother went so far as to warn me that Rush was Satanic, “Ruled Under Satan’s Hand.” Sigh. Ozzy in particular seemed to like to goad these “enemies of rock” as we dubbed them. The Ghoul on the cover of his album and the LP title “The Ultimate Sin” seemed to be aimed right at his religious critics.

Apparently inspired to respond, this Preacher had set up a giant cross in the parking lot and had a bullhorn he was shouting scripture through, along with extended diatribes about why we were all going to Hell for attending an Ozzy show. I never thought nor do I think the music you listen to can condemn you to a life of eternal damnation (unless you listen to Wham) but sure as shit, this guy was telling us it could. My friend SB and I stood at the edge of the crowd that had assembled around this guy, merely for amusement purposes. The guy was really into it, screaming into his bullhorn and foaming at the mouth. Most of the Ozzy fans around him were chuckling and a few had the temerity to make fun of the guy. I was worried the Preacher might stroke out in front of us and we were going to need to clear out of there pretty quickly if that happened. I never liked to hang around when the cops showed up.

It was then that a diminutive kid in the hard rock uniform: jeans, concert t-shirt and flannel shirt over it, came forward to ask a question. “Excuse me, Sir…” The Preacher looked stunned and frankly a little joyful that someone had paid close enough attention to ask him a question. Most of the concert goers were merely walking past him. The intrepid Pot Smoker then posed this metaphysical question to the Preacher, “So, if God created the natural world, and pot grows in nature, doesn’t that mean God put pot here for us to enjoy? I mean, doesn’t that mean God wants us to smoke pot?” My mind was blown. Unfortunately for the Preacher, I think his mind was blown too. He didn’t have an answer. The stunned look on his face betrayed his confusion. He began to sputter and stutter into his microphone…The crowd was hanging on what his response was going to be. After what seemed an eternity, the Pot Smoker turned and walked off toward his car. He was pretty sure, as we all were, that the Preacher couldn’t answer that “Big Question.” When the Pot Smoker walked away, the Preacher suddenly composed himself and muttered unconvincingly, “He doesn’t want an answer, look, he’s walking away…he doesn’t want an answer.” Like the rest of the crowd, I just shook my head and we headed to the car. Game, set and match for the Pot Smoker. As we walked to our car, I could hear the Preacher bellowing through his loudspeaker again and maybe it was my imagination, he seemed to have lost a little of his vim and vigor.

I felt like I’d walked away from that great concert a little smarter about the universe and how it works. While I’m a bourbon man, I certainly don’t think a little pot and a lot of heavy metal is gonna send anybody to Hell or anywhere else. I know I realized that night that you should never allow a judgmental individual or group to influence your behavior or your listening. As long as you’re not hurting anybody I say, go for it.

It’s a dark ride folks. Find someone you love, put on some good music and enjoy yourselves.

2 thoughts on “Metaphysical Wisdom: The 1986 Ozzy Concert, The Preacher and the Pot Smoker”