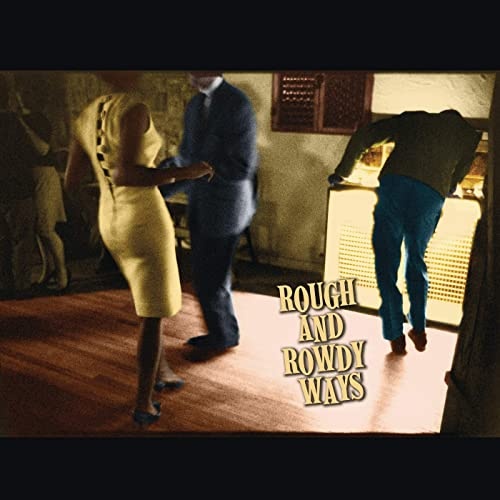 What a week it’s been for music fans or perhaps more accurately for classic rock music fans. Not only did Neil Young pull Homegrown his “lost album” from 1975 out of the vaults (Review: Neil Young’s ‘Homegrown’ – The Lost Masterpiece, In The Vaults 45 Years), but Bob Dylan also released his first album of all originals in eight years. I read somewhere that Dylan and Young are number 1 & 2 on the UK charts right now. Those Brits have always had better taste in rock n roll than anybody else, cheers mates! I locked myself down in the B&V labs and have been blissed out on this great music for about a week now… it might be time to take a shower… maybe eat something.

I’m on record as being a huge Dylan fan. One of my first posts was about Dylan’s Bootleg Series, Dylan’s Bootleg Series – A User’s Guide. It’s hard to believe there’s been three or four new Bootleg releases since I wrote that guide. Looking back on my Dylan fandom, it is perhaps odd that I became so enamored with his work. I always had a sense that he was “important.” And truth be told, I’ve always been intensely focused on lyrics. But when I had my rock and roll awakening, it was the late 70s. I actually discovered Dylan when he was in his Christian period. I thought “Blowing In The Wind” was a Peter, Paul and Mary song. Those were the “Puff The Magic Dragon” group for fucks sake. The first Dylan album I ever purchased was Slow Train Coming. I had no idea it was religious music. I just thought “Gotta Serve Somebody” was a great track with a lot of wisdom. Because in the end, everybody does have to serve somebody…”and it may be the Devil, and it may be the Lord…” although in my case it’s probably the Rock Chick. I’m not a religious person. At best I could be described as a hippy pagan dancing naked in deserted fields in the moonlight. But that album just clicked for me… well, maybe not “Man Gave Names to All the Animals.” How that led me to a lifelong love of Dylan is a mystery.

From Slow Train Coming (the title track is just as relevant today if you push out the religious implications), once I got to college and became “serious,” I started working backward through Dylan’s catalog. I bought the iconic Bob Dylan’s Greatest Hits the single album compilation… as if his “hits” could be contained on one thin volume. After working backwards through his catalog I eventually sold that album because I didn’t realize “Positively 4th Street” wasn’t on Blonde On Blonde. Youth, sigh. It’s probably good that I was so backward focused in my collecting because the late 80’s and early 90s were perhaps Dylan’s weakest period. I was just getting into him and pretty much everything after Empire Burlesque was… terrible. I bought and actually still have a fondness for Knocked Out Loaded, his album released to try and cash in on his tour with Tom Petty & the Heartbreakers backing him up. “You Wanna Ramble” is a great bluesy cover. I bought and promptly sold Down In the Groove. Other than “Silvio” cowritten by Robert Hunter and played with the Grateful Dead, that album was aaaaawful. Other than Oh Mercy there weren’t many albums that caught my interest in those dark Dylan days. And yet despite weathering a Christian period and Dylan’s creative nadir, I remained a devoted fan. I even told someone in the late 80s that only Dylan could save music. That might’ve been the vodka talking.

At that point I just figured Dylan’s career was over. He was one of those catalog guys, like the Beatles, whose old LPs would have to suffice. I completely lost track of Dylan. But then an interesting thing happened. Dylan recorded two albums of traditional folk tunes, Good As I Been To You and World Gone Wrong. When things get weird for Bob he always goes back to his folky roots. Jimi Hendrix was the same way but with the blues. Folk was Dylan’s foundation. That reconnection with his roots sparked something in Dylan. His next LP was the Daniel Lanois produced Time Out of Mind. After almost 10 years in the wilderness Dylan pulls off the biggest comeback in rock n roll history (with the exception of perhaps the King, Review: Elvis Presley – ‘The Complete ’68 Comeback Special: 50th Anniversary Edition’ – The Return Of The King). “Love Sick” from that album ended up on a Victoria Secrets’ ad which caused a lot of heartburn for some people. I just thought he was lucky to be there…

Dylan put out a string of phenomenal records in what can only be described as a late career renaissance. Time Out of Mind (97), Love & Theft (01), and Modern Times (06) were the best trio of albums he’d released since the late 60s. Together Through Life incorporated Los Lobos’ David Hidalgo’s accordion and Heartbreaker Mike Campbell’s guitar to wonderful effect. I particularly like the bluesy “My Wife’s Hometown.” In 2012 Dylan released Tempest another triumph but it was rumored to be his last LP. ‘The Tempest’ was Shakespeare’s last play. People have been reading stuff into Dylan’s stuff since The Freewheelin’ Bob Dylan.

After Tempest, Dylan took another left turn in a career of left turns. He released Shadows In the Night, a collection of pre-rock tracks that are all associated with Frank Sinatra. I bought and really liked that album. It was like listening to a bar band at 2 a.m. in a seedy joint down by the border in Laredo or maybe El Paso. This wasn’t a Rod Stewart Great American Songbook exercise. Sinatra always had a boozy, late night, heartbreak group of tracks and Dylan fully inhabited those songs. But then he put out a second Sinatra-themed LP, Fallen Angel. And then another – a three disc album – Triplicate. I have to admit, I got off the train after the first one. I dig it, but not literally four discs worth.

I had begun to wonder if we’d ever get any original stuff from Dylan. Van Morrison has had quite a run doing mostly blues and jazz covers over the last few years. He finally put out an LP of originals last year to great success, LP Review: Van Morrison’s New, All Originals, ‘Three Chords & The Truth’ – A Laid Back Groove. A month or so ago, Dylan dropped a surprise almost 17-minute masterpiece, “Murder Most Foul” (Bob Dylan: The Dark, Mesmerizing 17- Minute New Single, “Murder Most Foul” My antennae immediately shot up. I quickly found out a new album was coming!

Rough And Rowdy Ways dropped last Friday and I’m simply blown away by Dylan’s continued late career genius. One can only compare him to perhaps Bowie for great music this far down the line. I read Jagger say in an interview once that the Stones’ latter work will never “acquire the patina” of their older stuff… and sadly he’s right. Although I think music fans will be talking about this album in 50 years. Dylan is backed by his road band and I was thrilled to see that guitarist Charlie Sexton has returned… he’s perhaps Dylan’s most sympathetic guitarist since Robbie Robertson. With Sexton in the band: drummer Matt Chamberlin, longtime bassist Tony Garnier, multi-instrumentalist Donnie Herron, and Bob Britt on guitar. Listed under the “additional musicians” list were among others, Heartbreaker keyboardist Benmont Tench, jazz pianist Alan Pasqua and Fiona Apple (!) who must be playing piano as we don’t hear her voice on the LP… seems like a squandered opportunity. I loved her duet with Johnny Cash on the American Recordings box.

The album’s first track “I Contain Multitudes” is a hushed affair. I get the vibe of a village elder sitting down to drop wisdom on me. The title is drawn from a Walt Whitman poem and it has the feeling of literary genius to it. The song, like the album is overflowing with cultural references. I found the track hypnotic… “I’m just like Anne Frank, like Indiana Jones and those British bad boys the Rolling Stones.” He goes on in the same stanza to name-drop William Blake. Every song on this album is like an onion… so many layers.

The soul of this album – and I don’t mean the musical genre soul, I mean the soul – are two epic tracks. “Murder Most Foul” has been reviewed here. I won’t go back into that but it’s just grown and grown in my estimation. It’s one of the most important tracks Dylan has ever done and that says a lot. The other “epic” track is “Key West (Philosopher Pirate)” a nine and half minute deep rumination on death. Key West seems to be a metaphor for the end of the road. You can’t go any farther. “Key West is fine and fair,
If you lost your mind, you will find it there, Key West is on the horizon line.” As we all get older, death appears on the horizon line… As a side note, I’ve been to Key West and uh, I’ve lost my mind there, but never really found it. Both tracks, “Murder Most Foul” and “Key West” are pretty amazing statements by Dylan.

If those two tracks are the “soul” of the album, the beating heart of this thing are a trio of blues based tracks that I loved immediately. “False Prophet” is a blues stomper that has been stuck in my head since I heard it. Dylan was so different from most folk artists in the 60s who were all doing “We Shall Overcome.” Dylan was doing acoustic country blues… on his first album he did “In My Time of Dying.” “False Prophet” is one of his best blues tunes to date. “Goodbye Jimmy Reed” is a great tribute to the blues artist. It’s the most rocking moment on the album. “I can’t play the record ‘cuz my needle got stuck,” is maybe my favorite lyric here… “Crossing the Rubicon” is a wonderful snarling blues number and statement of purpose.

The other tracks here are all knockouts. “My Own Version of You” is a ‘Bride of Frankenstein’ treatise on love. He references gangster characters of Brando and Pacino (The Godfather and Scarface) all the way to Freud and Karl Marx. It’s a great lilting track. “I’ve Made Up My Mind To Give Myself To You” is a lovely track that may have been influenced by eight years of singing Sinatra covers. “Black Rider” is a hidden little gem here…

This is another in a string of great original LPs from Dylan. At this stage of the game this all feels like hard won wisdom gained and now shared. The album, like the first single “Murder Most Foul,” is brimming with cultural references. It’s got elements that feel like commentary on the American situation and experience. Mortality is all over this record. “Black Rider” sounds like an argument with Death itself. This is a great, great album at a time when the world needed a great Bob Dylan album.

Perhaps, back in the 80s, sitting a bar called Auntie Mae’s, I was right when I said only Dylan can save music… “Black rider, black rider, all dressed in black, I’m walkin’ away, try and make me look back.” It’s a dark ride. Take care of each other out there…

3 thoughts on “Review: Bob Dylan, ‘Rough And Rowdy Ways’ – The Spell-Binding 1st LP of All Originals In Eight Years”