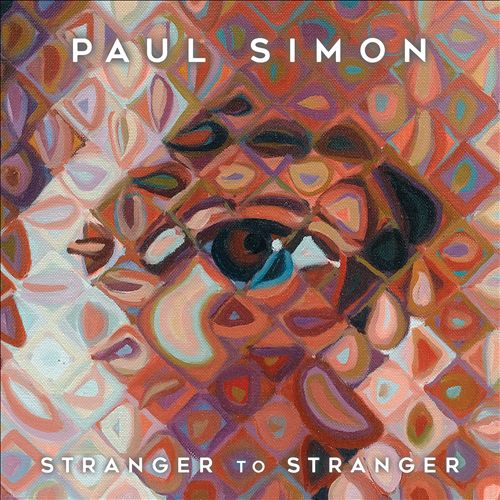 As previously mentioned on BourbonAndVinyl, I was never a huge Simon and Garfunkel fan. I mean, my parents owned their “Greatest Hits” album, how rock and roll could that be? However, I always liked Paul Simon’s solo stuff. While he was “folky” he wasn’t really a folk musician. He always had a great sense of humor that say, Pete Seeger, would never understand. There has always been an element of “world music” in his stuff, even back to his early solo days. Of course all that peaked when he went all-in with his masterpiece “Graceland.”

After “Graceland” Simon was really hit and miss. The critics loved “Rhythm of the Saints” but to me it sounded like something bad happened down at the ol’ International Music Food Court, like somebody dropped a tray or something. “The Capeman” thing is better left unmentioned. “You’re the One” was a great and highly underrated album. He even collaborated with Brian Eno on 2006’s “Surprise.” Like one of Eno’s other collaborators, David Bowie, I would defy you to find an artist in his later years so willing to experiment as Paul Simon. I’m not comparing Bowie and Simon’s music, they come from way different places, but that spirit of, “yeah, what the hell, let’s add some drum loops and a tuba,” that “try anything that helps the song” spirit pervades both their work.

Nowhere was that more evident to me than on Simon’s 2011 album “So Beautiful Or So What.” That album was the type of a late period gem from an older artist that inspired this very blog. It had more acoustic guitar driven songs vs Simon’s post-“Graceland” drums/percussion driven songs but that didn’t mean there wasn’t a strong, almost jazz-like experimentation to that album. I loved “Getting Ready For Christmas Day,” with it’s drum loop and samples of an old time preacher. None of that sounded forced from a guy who was almost 70 at the time.

All this leads me to Simon’s new album, “Stranger To Stranger.” He brought in some guy named Clap!Clap!, an Italian/electronic/dance artist – what that means, I’m still scratching my head over. I just see that as the equivalent of bringing Eno in on “Surprise,” the guy must have added some of the percussive elements. I was nervous about the involvement of someone named Clap!Clap! but Simon’s music is so diverse I don’t think anybody can come in and screw it up. I also know his old producer from his Simon and Garfunkel days, Roy Halee was involved on “Stranger To Stranger.” It appears Simon is looking forward and backwards at the same time.

The album opens with three very percussive/drum driven songs. “The Werewolf” has Simon’s signature sense of humor, “he had a fairly decent life and a fairly decent wife, she stabbed him with a sushi knife…” It appears the monster isn’t a full-moon altered lupine but the human nature inside us all. “Wristband” starts off as funny song about a rock star who gets locked out of his own show, but as you listen you realize it’s a song about the struggle of the haves vs the have nots. “Street Angel” is almost a gospel song, and certain phrases in the song turn up later in the album, “I write my verse for the universe” being one…

After that opening percussion heavy trio of songs the album progresses to the beautiful middle section, which for me is the heart of this record. “Stranger To Stranger,” the title track, is a beautiful ballad. There’s a sax solo in the middle and the jazzy feel takes me back to the song “Still Crazy After All These Years.” Maybe it’s the chorus of, “I’m just jittery, I’m just jittery, it’s just the way I’m dealing with my joy.” This song blows me away. “Stranger to stranger, if we met for the first time… can you imagine falling in love again…” Heavy stuff. “I’m In a Parade” leaves no doubt where the parade is, it’s all New Orleans Mardis Gras. “Proof of Love” is another beautiful ballad.

“The Riverbank” marks the final part of the album and a shift from a focus on love to a focus on mortality. It’s not dark or morbid like say, Dylan’s “Time Out of Mind.” When Simon sings, “it’ll be a long walk home, from the riverbank” the wisdom feels timeless. “Cool Papa Bell” takes us back down to New Orleans. I think I hear a tuba. God knows what instruments were used on this record. “Cool Papa Bell” certainly lifts the mood back up with lyrics like, “every day I’m here I’m grateful that’s the gist of it… but check out my new tattoo.” That song remains my favorite on an album of strong tunes. “Insomniac’s Lullaby” wraps up the album. “Oh Lord don’t keep me be up all night with questions I can’t understand…” is something I think every night as I lay awake hoping for slumber. It’s the perfect ending for this album. A gorgeous lullaby for those of us who may never sleep well.

This is a complicated record from a complicated artist. This is music in it’s own category, or more succinctly, music that is impossible to categorize. It’s beautiful, it’s diverse, it’s funny, and every listen brings me something new. It’s like a surprise, long email from an old friend you haven’t heard from in a while. Simon unburdens his  mind on this record and we’re all the better for it.  I highly recommend this record. It’s definitely a “dark of the night,” full bourbon glass type of album… As always, pour something strong and enjoy!