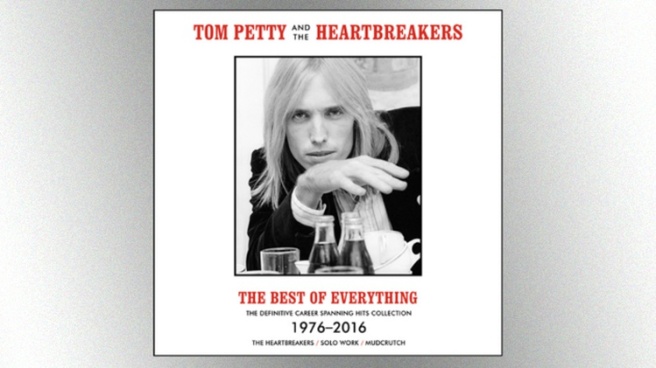 I’ve always got my ear to the ground for rock’n’roll I might have missed out on. I was perusing the web and iTunes recently, because what else can you do when you’re snowed in, and saw that Tom Petty was putting out another Greatest Hits package. I fear he’s going to go the route of Elvis or Hendrix – artists who died too early whose heirs start repackaging their catalogs into multiple greatest hits packages. There’s a high likelihood if you’re interested in this greatest hits package, you’re not likely to be a reader of B&V… everybody who reads this blog probably owns most of this music.

I will say they took an interesting approach to this album. It’s two discs long and at 38 songs, its obviously fairly comprehensive. The approach to this album that would separate it from anything that came before it is the inclusion of tracks from Mudcrutch. For the first time ever you get Petty, Petty & the Heartbreakers and Mudcrutch in one two disc package. Petty’s solo career wasn’t quite like Springsteen’s, where Bruce would work without the E Street Band, typically in a stripped down, acoustic fashion. Petty’s “solo” work usually included at least Mike Campbell and usually Ben Tench. So the marketing angle on this is Petty solo, Mudcrutch, Heartbreakers, it’s all here. And if you haven’t purchased any Petty before, this looks like as good a place to start as any.

For me, when I see a Greatest Hits thing come out, I start sifting through the track list looking for anything I don’t recognize. They tell me OCD is treatable, but why spoil the fun? More often than not, one of the draws of a Greatest Hits package for those of us who have most of an artist’s catalog is the “previously unreleased” tracks from the vaults. This Petty “Career Spanning Hits Collection” is no exception. Included at the very end was a track that caused me to prick up my ears, “Real Love.” I scanned the memory banks and, no, this was not a track I was familiar with.

Apparently, rather than include this in last year’s box set, the brilliant American Treasure, LP Review: Tom Petty, ‘An American Treasure’ – A Different Path Through a Brilliant Career, the Petty camp decided to hold “Real Love” out to include in this year’s package. Why nobody will release the entire Wildflowers sessions, something Petty was working on and continually promising is anybody’s guess. I’m sure the record company wants to force us all to buy the original album again in order to get the bonus material and the Petty camp wants to make the bonus, unreleased stuff available separately. It appears we have reached an impasse. Which is too bad, because I’d love a pristine copy of “Girl On LSD,” my favorite outtake from the Wildflowers sessions. It’s actually an anti drug song… we don’t judge here at B&V. “I was in love with a girl on LSD, she’d see things I’d never see…”

“Real Love” starts off with just Petty’s voice and an acoustic guitar. Its a melancholy track, there’s no way around describing it as such. As I listened to American Treasure I could usually recognize which album the unreleased tracks came from. However, in this case I can’t quite put my finger on when this track was recorded, but if I was a betting man, I’d guess it was from The Last DJ sessions. He mentions a CEO, which makes me think of “Joe.” “Real Love” has a great Petty vocal, maybe he’s a little down but resolved and defiant. Petty sings over a jangling Mike Campbell guitar and Ben Tench’s piano. The narrative has Petty explaining his motive – he didn’t do it for anything or anybody except himself, his woman and real love. I can’t think of a better motive. It’s certain Petty wants everyone to understand that he never sold out.

While I’d hoped for some sort of revelation like “Gainesville,” or “Keep A Little Soul” I can’t quite say “Real Love” gets me to that same place. It’s a nice track to have, but it’s for those of us intense Petty fans and completists out here. I would recommend anybody who likes Petty to give it a spin but again, only True Fans Need Apply.

I hope everybody is staying warm and sane during what is turning out to be a horrible winter here in the US midwest. Pour yourself a toddy and keep the turntable working and we’ll all get through this. It’ll make Spring all the much sweeter. Cheers!