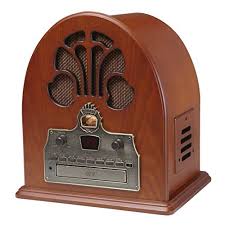 “I like to listen to music, I like the way that it sounds on the radio…” – Joe Walsh, “The Radio Song”

When I was a young kid, before the hormonal-overdose party that is puberty began, I had a clock radio on my nightstand. I rarely, if ever, turned the “radio” part on. Well, that’s not really true. I was a huge KC Royals fan when I was a kid and in the summer I’d fall asleep listening to baseball games. I can remember using the Royals’ exploits as an excuse to get out of bed and walk to the landing on the stairs to tell my dad, “Amos Otis hit a home run!” “Shut up and go back to bed…” ah, dad. So my clock radio was merely the miserable howling siren that pulled me from sweet unconsciousness to a startled wakefulness that signaled, yes… it was time to load the “yellow death wagons” and head off to the dreaded “pit of misery”, er, I mean school. With that as a backdrop maybe it’s not so hard to understand why I never turned the radio on… classical conditioning, baby.

It wasn’t until a fateful day riding in my mother’s Oldsmobile when all that changed. Somehow, I ended up in the backseat and my brother was riding up front with mom. My brother had latched onto the Beatles (and later, tellingly about his personality, the quiet Beatle George Harrison), and was a huge rock and roll music fan. I was probably 13 around this time which means he was just ten. How the younger of us ended up in the front seat with me in the back is one of those unsolvable mysteries of my childhood. Anyway, my brother immediately commandeered control of the radio and was bouncing back and forth between the bubble gum pop of Q104 (with Johnny “Rockin'” Rollins, who is still around as a traffic-helicopter guy) which left me cold and the rock station, KY/102. I was only half paying attention when they played the Stones’ “Beast of Burden.” I remember lunging forward and saying, “Turn that up, man…” which surprised me almost as much as it did my brother. It’s kind of how I discovered sex, accidentally…it just sort of snuck up on me.

While my memories of radio are confined to where I grew up, I’m sure everybody had that favorite station in their hometown too… My clock radio, whose speaker beforehand had never been tested, was suddenly constantly tuned into KY/102 and cranked up loud. I realized I’d been missing out on a lot of really cool shit. Instead of a shrill alarm, my clock radio now awoke me to the sounds of rock and roll and morning DJs. That was one thing I really loved about radio, the DJs. KY had a great stable of talent who made me feel like I was part of a larger dysfunctional family. They had a comedy duo, Dick and Jay in the mornings. The afternoon guy was General Max Floyd of the Rock N Roll army. He’d use faux explosion noises while “blowing up” disco records. At night it was Katie McGuckin (sp?) who falsely announced that Rod Stewart had collapsed on stage and had to have his stomach pumped because… well, best leave that story aside, it was a slanderous lie. The overnight guy was named Vaughn Mack and he always sounded like the most stoned man on the planet. Vaughn was always famous for saying in his dull monotone, “Yeah man, uh, stay tuned, I’ve got some Boston, Van Halen and then some Stones coming right up…” and then he’d play everything but Boston, Van Halen and some Stones. Stay high Vaughn, stay high.

Suddenly instead of a shrill alarm, a portal to the world had opened up on my nightstand. Listening to the radio is where I got my PHD in classic rock. I learned about all the bands that had come before and all the bands that were current. I would leave the radio on even when I left my room and padded down the hall to shower and try to tame my crazy mane of feathered-hair… I didn’t want to miss a thing. Instead of dreading that morning wake up, at least now it had become a lot more tolerable. I can still hear a song today, all these years later, and close my eyes and see my old room from the vantage point of sitting on my bed, pulling my socks on. The wallpaper is more atrocious in my mind than it probably really was… It was from listening intently to the radio that I started to become interested in where this music came from… it inspired me to start buying vinyl and reading liner notes. It’s where I first heard there were these things called concerts, where the bands I was hearing on the radio actually performed, live in person. I could be in the same room as Mick Jagger for two hours (albeit very far away from him)? Fuck yes, sign me up.

Not only were my mornings transformed. The ride home from high school had completely changed. My buddy Brewster would generously drive me to/from school and the radio was always on. I can still remember hearing “Another Brick In The Wall” the day it came out, in the back back of Brewster’s car heading home from school. He was a hard working guy and always had a pocket full of coin and his car stereo was fucking amazing. If I’d ever had a heart attack you’d need only throw me on his speakers and crank the drum solo on “In The Air Tonight” and I’d recover. When I was looking for my first car, I went looking for wheels with my dad who would ask questions about mileage, price, condition of the car – all I wanted to know was if it had a stereo and could play cassette tapes. I also quietly wondered if two people could fit in the backseat, but I kept that to myself.

I listened to KY every night in my room while I did my homework. My dad yelled, “Turn that down” so often that I thought my parents had changed my name. When I went away to college, two hours down I-70 to Kansas State, my friends and I from KC were distraught we couldn’t get the KC rock radio stations. The radio in Manhattan, Kansas was all Top 40 – Madonna, Michael Jackson and Paula Abdul. God, how did we survive the 80s? When Rock Line with Bob Coburn came on, an interview show where rock bands would come on and talk about upcoming albums and tours, I can remember my roommate Matthew and I going up to a room on the top floor of our building where a guy we knew had strung a coat hanger as an antenna out onto the roof so we could get KY102 and hear Diamond David Lee Roth dispense his rare brand of wisdom… he lit a joint while the interview was going on and called it a “behavior modification device.” Huddled around the static-filled sound of our friend’s radio, we howled with laughter.

There was just so much joy we all associated with listening to the radio. Whether it was blasting tunes while driving down the highway or tuning in over lunch as the DJ put on the new album from Springsteen, there was so much we learned from radio. When I was driving back home, either from college or during my exile years in Arkansas, as soon as I heard KY, I knew I was home… But then, during the late 90s, early 00s, something happened. The FCC changed the rules and allowed big media companies to start consolidating radio station ownership. Everything went corporate. Budgets and playlists shrank. Radio stations had to adhere to strict formats. KY disappeared, they went off the air. The classic rock station in KC doesn’t even play new stuff by the older artists any more. You have to seek that out in other places. Any new rock in the 90s got classified as “alternative rock” for one station or “heavy metal/hard rock” for a different station. These days, if it weren’t for Satellite Radio, I wouldn’t even turn my car radio on. At the risk of sounding cranky like my grandfather near the end of his life, without the casual generational, casual racism, rock and roll radio just isn’t the same anymore. Radio isn’t the same anymore.

I heard a song the other day, that gave me one of those flashback moments. I was a high school kid and I was sitting on the edge of my bed. I could close my eyes and see my old bedroom…jeez, I forgot I had a bean bag chair… It made me miss those good ol’ days, listening to rock and roll. I’m like Joe Walsh, I like the way the music sounded on the radio. I put together the following playlist, as a way to honor those memories. My thoughts on the tracks below.

I probably forgot a few great radio-centric tracks so please feel free to add in the comments section. Cheers… signing off now…

4 thoughts on “Playlist: Memories of and A Requiem For Rock And Roll Radio”