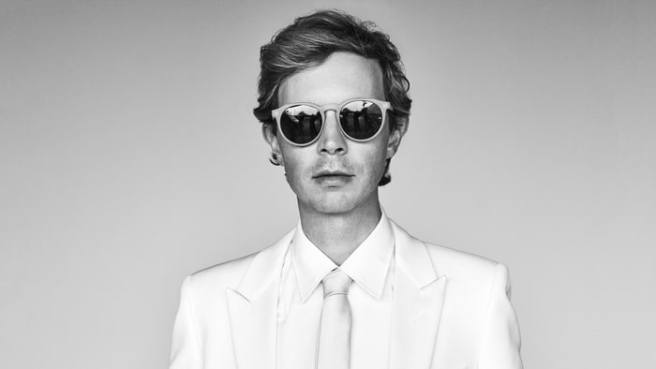 Well at last, Beck has finally announced a new LP, ‘Colors’ for October release. In addition, I was thrilled to see he’s released two new songs, “Dear Life,” and “Up All Night” in advance of the new album. I don’t know why it seems so long since Beck has released an album. It was only three years ago, in 2014, when Beck put out the superb ‘Morning Phase,’ an acoustic strummer of an album that was a companion piece to 2002’s melancholy ‘Sea Change.’ But before that, it was all the way back in 2008 when Beck last put out an album, the overlooked, Danger Mouse-produced ‘Modern Guilt.’ When an artist only puts out a couple of albums over the span of almost a decade, it just seems like a long time has passed.

Of course, Beck released the fun single, “Wow” over a year ago, reviewed on B&V previously (Beck’s New Single, “Wow”…”Giddy Up, Giddy Up”). I guess when I heard “Wow” I figured an album was imminent and the wait seemed longer than it really was. If I’m splitting hairs here, Beck released the song “Dreams” months before “Wow” came out, so it really has been a long time. Both of those tunes will appear on the upcoming ‘Colors’ LP so it could be argued this is the slowest album roll-out since the Pretenders ‘Learning to Crawl,’ but back then several members of the band died during that time period.

I’ve always loved Beck. I’ve always thought of him as the unholy marriage of Bob Dylan and the Beastie Boys. He has an acoustic, almost acoustic-blues, side that he marries in his best work with noisy samples and changes of tempo Metallica would envy. He seamlessly synthesizes the old with the new. I’ve been on his bandwagon since the seminal 90s slacker anthem “Loser” was released. And while his last album, ‘Morning Phase’ was more hushed and acoustic, I’m thrilled to see Beck get back to his fun, noisy side.

These two new tracks are much in keeping with the previously released singles, “Wow” and “Dreams” that were released, as mentioned, over a year ago. These are full on band songs with varied instruments and sounds. A piano line that could have been cribbed form ‘The White Album’ starts off the great “Dear Life.” I heard something familiar in this song, and I thought it was a slight melancholy that Beck brings to his singing sometimes, but I was wrong. This track is, dare I say it, “Beatle-esque.” It’s got a great little guitar riff and a powerful beat. I defy you not to tap your foot along as this tune chugs along. I don’t know if it’s the fact I just sat through a ClassicAlbumSunday featuring ‘Sgt Pepper’ that’s clouding my hearing on this, but “Dear Life” sounds heavily influenced by that trip-y musical era. I love the stuttered vocals on the bridge. It’s the perfect opening track for an album that sounds like it’ll be as musically varied as anything Beck has done since ‘Guero’ at least and possibly since ‘Odelay.’ This is real headphones music…

“Up All Night,” the second track he’s put out since announcing the album is a pure pop confection of a song. I can’t stop moving around when I listen to this song, and I don’t dance. It’s got a great beat. I have to admit this could have been a real contestant for “song of the summer” had he not waited to release this song until September. It’s pure up-beat groove. “I just want to stay up all night with you…” Who hasn’t felt that way. This song is as hooky as hell. It’s a melody that stays with you. It’s much of a piece with the previously released “Dreams.” There is something familiar about this track as well, so I don’t know if Beck has released it previously as a single or perhaps as part of a soundtrack… The Rock Chick suspects the latter. It’s just such a seminal melody, perhaps both of us are wrong.

I think this is going to be a great return to form album for Beck. I’ve liked every tune that I’ve heard from ‘Colors’ so far. Play it loud and groove like summer never ends folks!