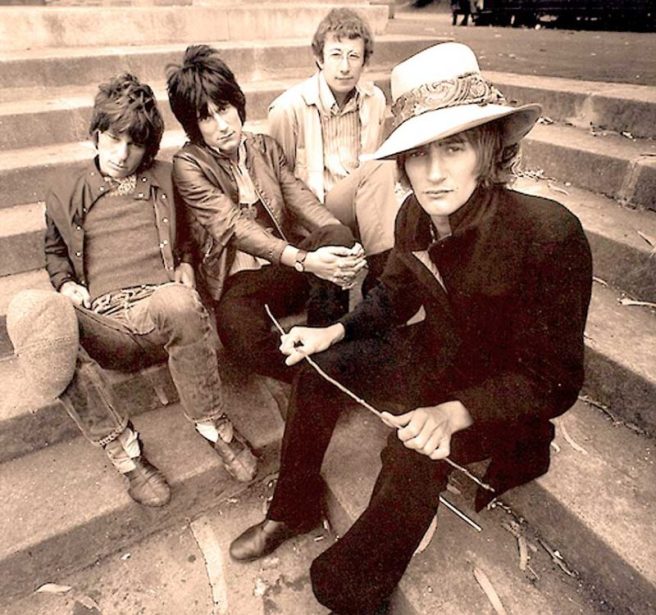 I saw the other day that Rod Stewart’s new album, Blood Red Roses hit number one in the UK. Congrats Rod… While I found his new album mostly un-listenable, I’m still a huge Rod fan. I’ve been on Stewart’s bandwagon since his early Mercury Records days and Truth be told, even before that. I’m still holding out for a Faces reunion and two of them are gone. For years I hoped Rod would start writing original music again and no one was happier than I was when he finally did so on his 2013 album, Time. He followed that up with 2015’s Another Country (Review: Rod Stewart “Another Country” – We Should All Be This Happy) before releasing this new disc last month. Alas, each album has been a case of diminishing returns. I will say it’s all still better than those awful American Songbook albums. Those records should have been entitled, Songs for Soccer Moms. His new record follows a disturbing trend for Rod… he seems to just turn over his stuff to whoever the producer is and lets them do what they want with the music in an attempt to sound modern. Strip away the gloss and there might be something decent there.

Rod’s other big problem is his choice of collaborators. He’s writing songs again, but he’s chosen to write them with a keyboardist, Kevin Savigar. I have nothing against Mr. Savigar, but Rod always writes better stuff when he’s collaborating with someone on guitar. Whether he’s going folky with an acoustic or bluesy with an electric, the guitar just seems to bring out the best in Rod, like a shot of adrenaline. He wrote most of his best stuff with Ronnie Wood during those aforementioned Faces and Mercury days. Even in the 80s he had guitarists like Jim Cregan or Gary Grainger to write songs with. Of course, Rod’s other great guitar partner was the man who broke Stewart’s career wide open, none other than Mr. Jeff Beck. Before The Jeff Beck Group Stewart was a traveling troubadour, bouncing from band to band in groups like Steampacket.

I posted once about John Mayall’s Bluesbreakers and the trio of great guitarists that came out of that band, Artist Lookback – John Mayall’s Blues Breakers: The Guitar Hero Trilogy 1966-1967. To find a band, outside of the Allman Brothers Band, with that much guitar star power, one has only to look to the Yardbirds. The Yardbirds started with Eric Clapton on guitar, only he was such a “blues purist,” he split the band when they moved to what he deemed a more “pop” sound. Clapton went on to soar to greater heights, first with John Mayall, then Cream, and as a solo artist. The Yardbirds ended their run with none other than Jimmy Page on lead guitar. Obviously, Page went on to “King of the World” status in Led Zeppelin. When the Yardbirds broke up, Page even ended up with the legal rights to the name. Zeppelin was almost called the New Yardbirds. In between Clapton and Page, the bridge between if you will, was a guy who never reached the commercial heights of the other Yardbirds’ guitar gods, Jeff Beck. The guy can flat out play. Sadly, as he said at the Yardbirds’ Rock And Roll Hall of Fame Induction, “They fired me, I don’t even know why I’m here?”

I’ve never understood why Beck wasn’t more commercially successful. His guitar prowess was such that Jimi Hendrix was a fan. High praise, indeed. In the 70s, having finally given up on vocalists, he recorded two instrumental, jazz fusion-y albums, Blow By Blow and Wired that both eventually went platinum. Both albums had George Martin in the producer’s chair. Stevie Wonder wrote “Superstition” for inclusion on Blow By Blow. I know that Beck can be… let’s call it “mercurial.” His temper and foul moods may be what kept him out of the limelight. He and Rod were trying to collaborate on an album four or five years ago but they couldn’t come to terms, which is a shame. Jeff Beck not only sort of discovered Rod, he resurrected his flagging career in the 80s when the two cut “People Get Ready.” The popularity of that track shook Stewart out of his pop slumber. When they were trying to collaborate Beck complained that Rod only wanted to sing the blues, and I’m thinking, “fuck yes!” Jeff didn’t want to play the blues, but oh, what an album that might have been. So last year, of course, Beck guested on Van Morrison’s Roll With The Punches album which was basically a blues record (LP Review: Van Morrison, ‘Roll With The Punches,’ A Laid-Back Blues Party). I guess Jeff can still play the blues but only when wants to.

Having been terminated by the Yardbirds, in early 1967 Jeff Beck formed the original Jeff Beck Group with Rod Stewart on vocals, future Faces and Rolling Stone Ronnie Wood on rhythm guitar and a revolving door of bassists and drummers. Eventually Ronnie Wood would move to bass and Rod would recruit his buddy from Steampacket Mickey Waller to play drums. That was as close as they’d come to a stable line up. Waller was eventually replaced by Tony Newman. I think even drummer Aynsley Dunbar was in this band at one point because lets face it, Aynsley was in every 60s band and several 70s bands. Beck had signed on with manager Mickie Most who was only focused on Jeff Beck as a solo artist. As the guitarist once remarked, “I understand why Rod left, he was being treated like the hired help.” Alas, that’s how Most and Beck himself treated the rest of the band. Wood was fired and rehired several times. In the end keyboardist Nicky Hopkins passed on the chance to join Zeppelin and joined The Jeff Beck Group as a full time member.

With all that turmoil and mismanagement the group did suffer. Jeff famously decided not to play Woodstock, something he has always said he regretted. I can’t imagine what an appearance at the iconic festival would have done for these guys. They toured constantly which led to their other great problem – they didn’t take any time off from the road to actually write original material. In the liner notes of their second and final album, Beck-ola Beck even cops to it, when he says “It’s hard to come up with anything truly original.” While the band wasn’t meant to last, they were hugely influential. Jimmy Page was watching what Beck did, pairing a strong guitarist who would bring the lads into the concerts with a charismatic lead singer who would bring the ladies in. He quietly recruited Robert Plant to recreate the model, to much greater success. The original Jeff Beck Group was the real blueprint for many of the 4-piece heavy blues/blues rock bands to follow. They left behind, in their brief time together, two great albums that every rock fan should own…

This is one of the truly seminal albums of the blues rock movement. It’s influence can be felt to this day in bands like Greta Van Fleet. The album opens with an old Yardbirds’ track, “Shapes of Things” and Beck’s guitar playing makes this version the definitive one. There are two towering blues covers on this record, “Ain’t Superstitious,” the old Howlin Wolf track, (and its as epic as the format ever got) and Willie Dixon’s “You Shook Me.” Jimmy Page, in a bit of cheek, had Zeppelin on their first album cover “You Shook Me,” which reportedly made Beck weep when he first heard it. Competition is good for the soul. Of the originals on this album, “Blues Deluxe” is probably my favorite. It lives up to the title and is the best blues song Rod ever sang. “Rock My Plimsoul” was a reworking of a B.B. King song but is another great bluesy rave up. It sounds like Beck is torturing his guitar here and I mean that in a good way. Mixed with Rod’s vocals, and Woody/Waller’s solid bottom, this album is perfect. So racked for material were these guys, they covered “Old Man River” with Keith Moon (unnamed) on timpani. This was basically the band’s live set, recorded in the studio. I wish somebody had recorded these guys live in concert…but I digress. When I re-purchased this album on CD, I found the great bonus track, the bluesy, “I’ve Been Drinking Again,” which obviously, we love here at B&V loved.

The wheels were already starting to come off. The constant touring, illness and band infighting was taking it’s toll. If they’d just slowed down a bit from the road and taken more time to write original stuff. This album gets overlooked and criticized for that very reason, not enough new stuff, but it’s still a great blues rock album. There are two (and probably 1 too many) Elvis covers here, the opener “All Shook Up,” and “Jailhouse Rock.” While that shows the lack of newly written stuff, they’re still kick ass songs. Beck correctly described Rod as being on “vocals extraordinaire.” Keyboardist Nicky Hopkins, now a full time member, brought the beautiful, piano driven “Girl From Mill Valley.” “Spanish Boots” another original, is a rocker. Rod sings over Hopkins insistent piano line, while Beck’s guitar dive bombs through. The solo is mind blowing. “Plynth (Water Down the Drain) which Ronnie and Rod would steal later for their first record with the Faces, is as heavy as anything these guys recorded. It’s almost heavy metal. Stewart’s vocal verges on unhinged. The time changes Beck goes through thrill me even now. “Hangman’s Blues” is heavy blues goodness. The album times in at just over thirty minutes and I was puzzled when I bought this album (again) on CD, to find some great bonus stuff that could have been easily added to side two. The two bonus tracks, “Sweet Little Angel,” a great B.B. King cover and “Throw Down A Line” by Hank Marvin were both purportedly recorded during a jam. If this is the sound of a band jamming, they should have jammed more. While not as towering as Truth, this is still a must have.

Sadly, after ditching Woodstock, Beck, who was as fond as Rod was of fast cars, was injured when he wrecked his sports car. While Jeff was recovering, Rod recorded his folk-rock debut, The Rod Stewart Album (or in the UK, An Old Raincoat Will Never Let You Down) with Ronnie Wood on guitar and Mickey Waller on drums. It wasn’t long before Rod had joined Ronnie in the Faces. Beck formed a second version of the Jeff Beck Group but for me at least, he never recaptured the magic of this original line-up. Pour something strong and give these two records a listen.