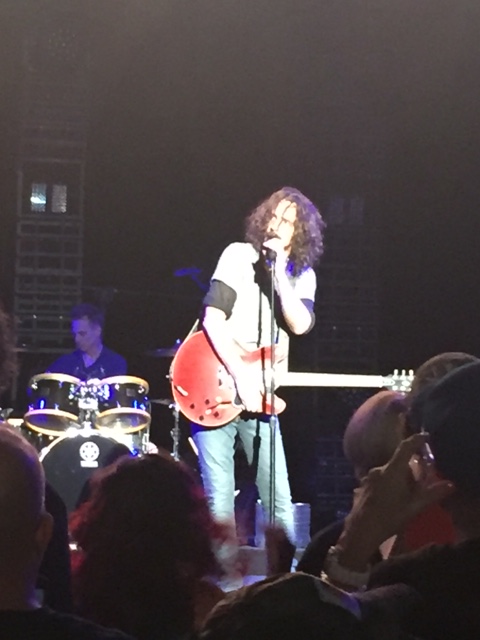 “I heard the news today, oh boy…” –The Beatles

I believe it was Robbie Robertson, guitarist of the Band who famously said, “The road has taken a lot of the great ones…” Sadly, we have one more name to add to that list.

I was awakened this morning by my wife, the Rock Chick, which usually doesn’t happen unless there is a task at hand, like “we forgot to put the recycling out.” I’m easily startled so nobody really likes waking me up before the alarm. She teared up as she gave me the devastating news that singer, guitarist, songwriter, father, husband, Rock Star Chris Cornell had passed away from an apparent suicide over night. I couldn’t believe it… surely there had to be a mistake here? My heart and thoughts go out to his family, his wife and two kids. I can’t imagine what they’re going through.

In a word, I’m devastated. This is made much worse for me as I just saw Chris and the rest of Soundgarden here in Kansas City on Sunday night at Starlight Theater and they were fantastic. When I was young, and I first started going to concerts, I realized that when you see a really great show there is a post-concert bliss or buzz, call it what you want, that can last for days. That Soundgarden post-concert high hadn’t even worn off for me yet. And now Chris is gone.

He prowled the stage like a prize fighter last Sunday. His voice was perfect. He sang all up and down the scale. His vocal was as strong as anything I’ve ever heard, and I’ve heard everybody. He played more guitar than I thought he would and actually had some chops. The man was truly a Rock Star, with a capital R and S. He told a wonderful story about his grandparents, who he said lived in KC. His grandfather built Rolls Royce engines here, apparently. He said coming over the river and seeing Kansas City, the few times he visited, always made him feel good. It was a lovely moment in the show. I felt he’d really connected with the adoring audience. My God, he was only three months younger than I am.

I was a big Soundgarden fan. The first thing I connected with was Cornell’s voice. “Fell On Black Days” is a song that means so much to me, I don’t feel I can share it in these pages. I also bought the Temple of the Dog LP, a tribute to Chris’ fallen friend Andrew Wood of Mother Love Bone. “Say Hello 2 Heaven” from ‘Temple of the Dog’ is another of those songs that take me back to a very specific time in a very moving way. After Soundgarden broke up I bought his first solo LP, ‘Euphoria Morning’ which I didn’t connect with, although “Can’t Change Me” from that album is still in high rotation here at the house (I play it for my wife). I really loved his work with Audioslave. I have all three of those great albums. When he returned to his solo career I was back on the bandwagon when he released the live acoustic ‘Songbook’ album and the fantastic acoustic based studio LP, ‘Higher Truth,’ reviewed on B&V. I can truly say I was a fan of most, if not all, of this guy’s work. ‘Higher Truth’ will be playing in my house all day.

I was happy a couple of years ago when Chris got back together with his mates in Soundgarden and they put out ‘King Animal,’ and was thrilled to see them Sunday night. I wanted to see him when he got back together with Temple of The Dog for a brief tour and I pray someone taped those shows. He even played with Audioslave at a benefit a couple of months ago… It seems he’d reunited and made peace with everybody. That is some comfort, I guess.

My friend, drummer Blake, said via text, “Only Eddie Vedder is left from the big 4 Grunge bands of the 90s…” It hadn’t occurred to me we’ve lost Kurt Cobain (Nirvana), Layne Staley (AIC), and now Chris Cornell. Soundgarden was purportedly working on a new album that I think we all were looking forward to…

This is just a fucking tragedy. I am distraught. If you’re out there, and you’re having a hard time, reach out to somebody. Don’t let it get to this point.

I had a dear friend commit suicide back in the early 90s. It left a mark on me that remains to this day. I can’t help but feel this particular artist, going out in this particular way is going to leave a similar mark on a lot of people.

4 thoughts on “I Awoke To The Devastating News: Chris Cornell Has Passed Away, RIP”