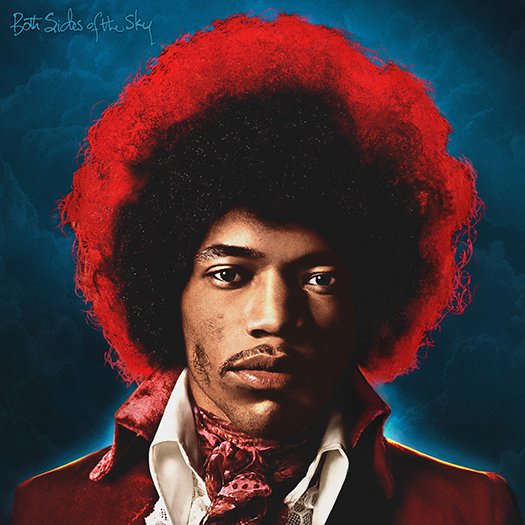 The Hendrix vaults, like my cup, runneth over… I can’t believe this long after Jimi Hendrix’s tragic, early demise that there are still recordings of this high quality that haven’t already been released yet. Of course, my friend Matthew will tell you there’s probably a second guitarist on the grassy knoll – there isn’t one Matt… These are, for the most part, fully realized, in-studio tracks that I’ve never heard before. Full disclosure, unlike Dylan, I’ve never been a Hendrix completist. I own a lot of his music, but no bootlegs whatsoever. Kudos to Eddie Kramer, Hendrix’s engineer back in the day, for pulling this together and making it sound so exceptional. I’m sure there are pasty guys in New York with goatees and grizzled visages who have book cases full of reel-to-reel tapes that they only handle when wearing white gloves, who have heard these songs bootlegged before… but for me most of the tracks on the newly released Both Sides of the Sky are new revelations. This album completes what I consider a loose trilogy of albums full of unreleased Hendrix tracks: Valleys of Neptune and People, Hell and Angels being the other two albums… All of which are essential for any Hendrix fan or fans of electric guitar in general.

After spending the weekend with this album and the other two I mention, I have to say, with all apologies to Eddie Van Halen (who I recently wrote about) and Jimmy Page (whose playing I adore), Jimi Hendrix is simply the greatest guitarist who ever lived. It’s not even close. I’m sure there are people out there who will want to fight me on this… I can remember when I was in junior high, sitting at the back of the school bus heading home one day. I alway sat in the back of the bus with the stoners. They were high but they were generally smarter people than the jocks up front. These two guys sitting in the rows in front of me got into an actual fist fight because they were arguing about what musical direction Hendrix would have taken if he’d lived. One of them made the mistake of saying Hendrix would have gone into jazz. The next thing I knew, punches are being thrown. I gotta say, those stoners were dedicated music fans.

Since Hendrix built and owned Electric Lady Studios, I like to think he’d have made a fortune from other artists recording there… I’d like to think, had he lived, Hendrix would be living in a condo above the studio, the reclusive ex-guitar God, who nobody sees or hears from unless he comes down on the street to score some weed. Maybe every once in a while he’d grant an interview where he’d say a few pro-Peace things, a few anti-Trump barbs and maybe drop the words “groovy” and “dig it” into his conversation. He’d refer to everyone as “Dude.” Eventually he’d have made the inevitable Rick Rubin produced comeback album – in Hendrix’s case it would have probably been an all acoustic, Blind Lemon Jefferson covers album. It’d probably win a Grammy. After a rambling speech accepting his Grammy, he’d return to his reclusive ways, where he’d only be seen occasionally wandering through the studio in a kaftan, headed out on the street to buy more weed. But then again, my imagination may be getting away from me on this…

The recordings that make up Both Sides of the Sky, from what I can ascertain, come from roughly 1968 to 1970. Since Hendrix owned a studio he spent almost all of his time when he wasn’t touring, recording what was to be the follow-up to Electric Ladyland. I think besides Electric Lady, he also spent a lot of time at New York’s Record Plant where some of these tracks were recorded. The line up of musicians on these tracks changes by track. Some of these songs feature the Experience, Mitch Mitchell on drums and Noel Redding on bass. Others feature the guys who were in the Band of Gypsies, Buddy Miles on drums and Billy Cox on bass.

There are different versions of songs here that have appeared elsewhere. Each of the the three albums I mentioned above has a version of the blues tune, “Hear My Train a Comin’.” That may make you shy away from a compilation like this, but I can literally listen to each version and find something different in each one. Hendrix is like a painter, like say, Cezanne, who would paint the same water lilies repeatedly, but using different colors, different perspective, different arrangement of the subject. Like that, Hendrix approaches the song and the solos differently on each track. Hendrix was, at heart a blues guy. Like Dylan with folk music, Hendrix, no matter how far he strayed into psychedelia, would return to the blues. I get the feeling that “Hear My Train a Comin'” was his in-studio warm up jam. He gets the band together, the microphones get set up and to heat up the room, the band naturally goes to it’s comfort zone and they play the blues. The solo on this version is ferocious.

There are other titles you’ll recognize, but these are different versions of the songs. I’ve heard “Lover Man” on live albums, but this is the first studio version I’ve heard. I’d also heard “Power of Soul” on the live album, Band of Gypsies, but this is the first studio version for me. There’s what sounds like an earlier version of “Stepping Stone,” which appeared on the album First Rays of the New Rising Sun. All of these, if you’ve heard the other versions, gives you a glimpse into Hendrix’s creative process. They show how he’d often recut and rerecord his guitar parts endlessly until he got something that was revelatory to him. It’s great stuff.

He has a number of collaborations here. Stephen Stills shows up on two tracks. There’s what must have been an earlier version of Joni Mitchell’s “Woodstock,” on this record, before CSNY did it, where Stills plays organ and Hendrix plays bass. While I like that, Stills does a song “$20 Fine” where he sings and plays organ and Hendrix plays guitar that is fantastic. I can’t believe Stills never returned to that song. I knew these guys were friends, almost every other solo Stills plays now he adds in the liner notes, “Guitar solo inspired by James Marshall Hendrix.” I don’t know why he can’t just say Jimi. Sometimes, though talented, I get the feeling Stills is a bit of an asshole. The other collaborations, and they’re both “knock you out” awesome, are Hendrix with Johnny Winter doing “Things That I Used to Do” a track I first heard in the capable hands of Stevie Ray Vaughn. It’s as bluesy as hell. It’s fun to hear Hendrix and Winter, master blues guys, trading riffs. The second collaboration is Hendrix with his old friend, saxophonist Lonnie Youngblood and they do this fabulous tune “Georgia Blues.” I can’t believe this track wasn’t released. Lonnie sings on the song and it amazes me that Hendrix can step back, out of the spotlight and yet still stand out. All those years as a side-man on the “Chitlin Circuit” taught him well.

On unreleased compilations like this, there are usually instrumental tracks, stuff the band laid down but didn’t get back to in order to record lyrics/vocals. There are a few of those here. There’s an atmospheric thing called “Jungle” that just builds and builds. There’s an early version of the song “Angel,” here without the vocals called “Sweet Angel.” The best of the instrumental stuff here is “Cherokee Mist.” Hendrix is playing a sitar as well as guitar on that one. It starts off with a tribal sort of drum thing and then the band kicks in. It’s one of the best tracks here.

I already reviewed his take on Muddy’s “Mannish Boy” (Jimi Hendrix: “Mannish Boy,” From The Upcoming, ‘Both Sides of the Sky’). It’s Muddy’s lyrics set to a rolling riff that explodes with guitar fury at the end. Another great headphones listen. The only track that jumped out to me as a “in studio creation” is “Send My Love to Linda.” It starts off as solo Hendrix voice/guitar and midway through they splice it with a band version of the song. The splice is pretty jarring. It couldn’t have been worse if they’d recorded Kramer pulling the scotch tape off the roll and slapping it on the magnetic tape. Still, the guitar work at the end is pretty amazing. I’d call that song a nice to have, not a have to have.

It’s been a wonderful weekend spending time with the master of all things guitar, Jimi Hendrix. I love this album, it may be my favorite of the trilogy of unreleased stuff. I advise anybody who loves Hendrix to pick this up. This certainly wouldn’t be where I’d start my Hendrix collection – pick up the albums he released in his life time – and then work your way through some of the live stuff. But when you end up here, at the unreleased stuff, his playing will change the way you think about guitar.

One thought on “LP Review: Jimi Hendrix, ‘Both Sides of the Sky,’ The Vaults Runneth Over…”