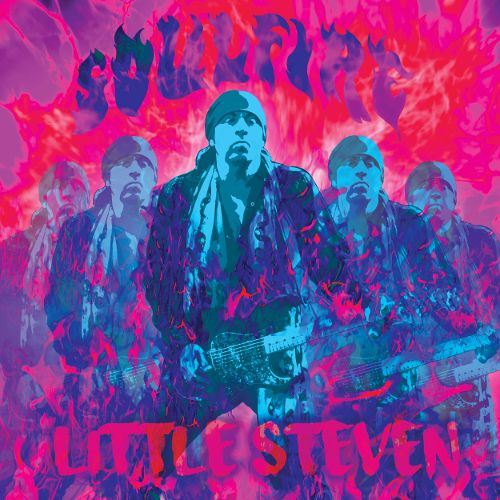 Well they certainly don’t make ’em like this any more…

Part of the joy of listening to albums, for me, back in the old days was reading the liner notes. I’ve talked about this many times on B&V. While other kids were reading Sports Illustrated, the Royals box scores on the sports page of the KC Star and Playboy, I was reading Rolling Stone, liner notes and well, Playboy. Reading liner notes is where my journey of musical spelunking began. From the liner notes I’d figure out who was playing what on an album or who produced a certain album I liked. I soon discovered that many of the producers and musicians I’d dug before were making the new music I also liked. I tend to follow members of bands or players into their other careers or projects.

One of the semi-unsung heroes of rock for me has always been Little Steven. These days  the fate of rock n roll is such that more people probably know Little Steven from his acting in The Sopranos or Lilyhammer than for his music. Sigh… I’m old enough to still remember when he was Miami Steve… The guy has more nicknames than Deion Sanders. Little Steven rose to prominence as Bruce Springsteen’s second guitarist in the E Street Band. Only Clarence Clemons played a bigger on-stage role for Bruce than Little Steven. To this day Little Steven and Bruce do the “meet me at the microphone” thing to co-sing lead on songs like “Out In The Street” or “Glory Days.” Little Steven actually didn’t join the E Street Band officially until the tour for ‘Born To Run.’ He actually produced the horns on “10th Avenue Freeze Out.” Bruce couldn’t get the horn sound he wanted, he has said it kept coming out sounding like Chicago. Little Steven came in and sang the horn parts to the players and they nailed it. “Time to put this guy on the payroll…” was Springsteen’s reaction. Little Steven was given a “production assistance” credit on ‘Darkness On The Edge of Town’ and a full producer’s credit on ‘The River.’ He really shaped a lot of the music from the era of Springsteen I love the most, the 70s.

What many people don’t know, or perhaps have forgotten. is that Little Steven was a producer long before he joined the Bruce and the E Streeters. His most famous production work was probably with Southside Johnny and the Asbury Jukes. I’ve read that he helped form the group but it’s never been clear to me whether he was a full fledged member or not. Regardless, he wrote a lot of their early music and produced their first three albums. I always thought of Southside Johnny as the B-team from the Jersey Shore. Springsteen would farm a couple tunes out to him for each of his early records. He never made much impact in Kansas City. As I got older I discovered his music and it’s really great, especially the LP ‘Hearts of Stone.’ Little Steven not only produced those early records, he wrote a lot of the songs that Southside Johnny performed. Again we find it was Little Steven shaping that Jersey shore sound. He went on to produce other artists from Darlene Love and Gary U.S. Bonds to the Arc Angels.

When Springsteen retreated to his home studio to labor over the solo, acoustic, dour album ‘Nebraska,’ Little Steven and the rest of the E Street Band were at loose ends. Springsteen didn’t tour after ‘Nebraska’ so that really left the band with nothing to do. Clarence Clemons even did a solo album with the Red Bank Rockers. Little Steven, whose popularity had been established with Springsteen in his live shows was approached about doing a solo album. The result, ‘Men Without Women’ has been described as the greatest Southside Johnny and the Asbury Jukes LP that they never made. I just remember sitting in my room in college when my roomie Drew came in with that album. It was a revelation. It was a soul rock classic. Drew turned me on to a lot of great music… but I digress.

Growing up on the Jersey Shore, in the 60s, must have been a unique time in music. You could hear literally everything on the radio back then. Soul music, like Otis Redding, Motown, the Beatles, Stones and British invasion bands. Listening to Little Steven’s work over the years you can tell all of that music stuck in his head. He has this unique way of blending both soul music, with big horns and the garage rock sound of early Beatles and Stones with heavy guitar. ‘Men Without Women’ was the perfect synthesis of all those sounds.

After that album, I followed Little Steven pretty closely. After the solo debut, he returned to work on Bruce’s ‘Born In The USA’ and then bowed out prior to the tour. I was really surprised when he left the E Street Band. There have been rumors it was because of conflict between him and Springsteen’s manager Jon Landau who wanted to take Bruce to over-the-top stardom. Little Steven was said to be the dissenting voice in the room who wanted Bruce to stay truer to the music vs the fame. Who knows? I’ve also read Little Steven say that he joined the E Street Band to help Springsteen “make it” and when he did he felt he could move on to his own solo career. While Springsteen toured the world on ‘Born In the USA’ Little Steven put out his second solo album, the decidedly political ‘Voice of America.’ I love that record but the production is very much of the 80s – tinny and too much synthesizer. The songs “Undefeated” and “I Am A Patriot” are still in high rotation here at the B&V lab some 30 years later…

I was delighted to see that Little Steven was returning to his solo career with this year’s ‘Soulfire.’ Gone are the political trappings that dominated much of his work from ‘VOA’ to his Sun City protest stuff. He’s back to doing what he does best – combining soul music, with the big horns and garage rock guitar. I really love this record. It’s so much fun to hear this sound. You just don’t hear records like this any more. This is a bit of a weird album for me as it’s mostly Little Steven covering his old material he wrote for other people, from Southside Johnny to Gary U.S. Bonds. So almost all the songs on this record may seem familiar to those of us who were fans of that Jersey Shore sound. Part of me thought that was cheating, but hey, they’re his songs. I wasn’t upset when Springsteen released his version of “The Fever,” why would I begrudge Little Steven reclaiming his old songs.

The horns on this record are huge. At first listen the album may seem a little monochromatic, but the more I listen the more nuanced stuff starts to jump out at me. Each new listen reveals something new to me. The album starts off with the title track, which starts with a funky little guitar that could have been cribbed from a Supreme’s record. Then the horns take off. Some may grouse about Little Steven’s vocals. Give me a guy who sings with heart and emotion over a perfect-pitch Steve Perry any day. Those same people are the ones I’ve heard complain about Neil Young’s vocal. It’s about feel, people, not hitting a perfect C.

The thing that jumped out at me almost immediately from this record is the Little Steven’s lead guitar playing. The solo on “I’m Coming Back” is Jeff Beck-ian. When Little Steven returned to the E Street Band it was really as 3rd guitarist behind Springsteen and the virtuoso Nils Lofgren so you don’t really get to hear him play those mean leads any more. I think he saved up all his great licks for this record. I love the way he plays the guitar on the blues stomper “The Blues Is My Business.” It’s bluesy but it cleaves to that horns/guitar template the whole album is built on.

There are changes of pace. The doo-wop song “The City Weeps Tonight” is just great. It’s a song the Shirelles could have done. The ballad, “Some Things Don’t Change” builds and builds to the climax at the end. I love the Byrds-y guitar that starts off the Springsteen co-written “Love On The Wrong Side of Town.” All of Little Steven’s influences can be heard on this record. The centerpiece of this record, for me, is “Down And Out in New York City.” It starts off with that funky was-wah guitar sound that wouldn’t be out of place on an Isaac Hayes or James Brown record. It’s an epic soul jam and perhaps my favorite song on this record. It even boasts a trumpet solo in the end, which I was frankly, not expecting. The beginning of “Standing In The Line of Fire” sounds like the soundtrack to a spaghetti western. There are subtle shadings like that all over this record.

I highly recommend this album to any fan of big, soulful, epic, fun, rock and roll. This is a great time from start to finish. Often in B&V I read myself typing “this is not an album you’d put on at a party.” Not so, this time around. ‘Soulfire’ is the kind of enormous music you’d want to play at a party. Turn this one up loud!