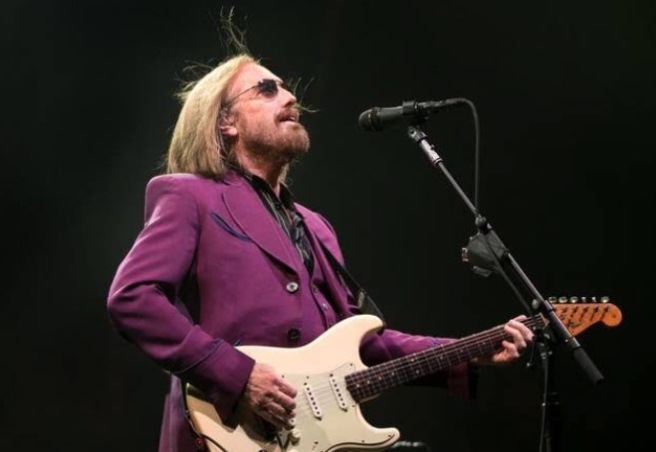 *image from the Kansas City Star

It was a bit of a rough May… First we lost Chris Cornell and then we lost Gregg Allman. I was beginning to feel that numb sense of despair I’d felt for much of 2016. But then I remembered on Friday, June 2nd, I had tickets to see Tom Petty & the Heartbreakers on their 40th Anniversary tour. And as a bonus, former James Gang/Eagles guitarist Joe Walsh was slated to open. While I love Tom Petty, and concerts in general, I was having a bit of trouble getting up for this show. It’s just that I’ve seen Petty so many times, I was fearful it would the same old set, the same old show. As usual, I was wrong…

As Petty is reflecting on his 40th anniversary, I couldn’t help but think back to my history with Tom. I can still remember my first Petty show. I had been a huge fan of his since their debut album came out when I was in junior high school, but I didn’t get to see him live until I was in college on the Pack Up The Plantation tour in support of the flawed but still enjoyable album, ‘Southern Accents.’ That show was ok, but the Heartbreakers were augmented with a horn section and back up singers. Sadly they also chose to hang a giant Confederate flag behind them, a choice Petty now regrets.

It wasn’t until I saw them on the ‘Let Me Up, I’ve Had Enough’ tour that I got the real, genuine rockin’ Tom Petty experience. That album was very Stonesy, for lack of a better word, and the show was more full on rocking. Sure, I’d seen them behind Bob Dylan, but they were better on their own. It was at the ‘Let Me Up…’ show in Boston that I realized what great musicians these guys are. Stan Lynch was still manning the drum kit and he was a monster. It was Mike Campbell’s guitar that really caught my attention. The man should be on the list of every “Greatest Guitarists” everywhere. I can’t say enough about Benmont Tench’s abilities on keyboards. He sits on a stool surrounded by every type of keyboard imaginable and seemingly plays all of them at the same time… it’s like the guy has 4 arms.

After that experience, I made a point to see Petty on every tour. I remember my buddy Stormin and I drinking with a group of friends of ours who were going down to old Kemper Arena in Kansas City to see Petty on the ‘Full Moon Fever’ tour. Stormin and I were broke and I was unemployed. Neither of us had bought tickets. Our friends talked us into going down to scalp, something I rarely do. Some guy walked up to us and asked us what we thought his tickets were worth. They were 5th row on the floor. “Uh, face value?” He just smiled and said, “Give me $20 each and we’ll call it even.” We ended up with better seats than our friends. That was such a great show for me, when you’re that close it changes the experience. I can remember, looking up to a darkened entry way, behind the stage, and a couple I could only see in silhouette were dancing to the music… it was like they were the perfect stage decoration. I envied them their joy.

It was my old friend Stormin who called to alert me that Petty was on tour for his 40th Anniversary. I hesitated a bit, only because at our last Petty show my wife, the Rock Chick said, “He plays the same 10 songs every time we see him… I may be done with Petty.” But knowing this was his 40th anniversary show, and likely the Heartbreakers last big tour, I did some research. Petty claimed they were going to mix up the setlist. I was in. I can only say, thank God for my over 30 year friendship with Stormin, because I would have hated to miss this beautiful Anniversary celebration.

Petty strolled out on the stage last night in a purple jacket. He’s so charismatic and lets face it, purple is just a regal color. I knew this was going to be a different night when they opened with the first song from their first album, “Rockin’ Around With You.” It’s got a Bo Diddley beat and was just a nice burst of rock to start the show. He followed up with a blistering version of “Last Dance With Mary Jane” which ended in a guitar dual between Petty and Mike Campbell… You just know Campbell is going to win all of those. He put on a guitar clinic all night. Everyone really needs to see this show just to hear Campbell play.

While Petty did mix up the setlist last night, what does it say about his catalog that when he plays a song like “You Got Lucky” which was a big hit, that it’s his change of pace material he rarely plays. That would be a must-play for any other artist. Last night was the first time I’d ever heard it live, and it was fantastic. I was thrilled he played some of his newer material… he really accessed all of his catalog and the newer song “Forgotten Man” is more relevant today than it was a few years ago. Playing these unfamiliar tracks put new life into “Won’t Back Down” and even “Free Fallin'” that Petty always plays.

The thing that really electrified last night’s performance was the enthusiasm of the crowd. They sang along on almost every song. I hadn’t seen a crowd that jacked up since the Stones a couple of years ago. The place was full and everybody was in full voice. I even caught the Rock Chick singing along loudly. It was just that kind of night. Petty announced the obscure soundtrack tune “Walls” as a song that had been requested… by him it turns out and the crowd even sang along for that one.

The middle of the set turns acoustic as he turns his focus on a subset of songs from his brilliant ‘Wildflowers’ LP. “It’s Good To Be King” was the usual extended jam. Then he went into “Crawling Back To You,” which has the great quote, “most things I worry about don’t happen anyway,” which could be my theme song. The acoustic strummer, “Wildflowers,” was simply transcendent. He kept things rolling with the rarely played “Yer So Bad” from ‘Full Moon Fever.” Wow!

Petty and the Heartbreakers brought it back up for “Should Have Known Better” which verged on punk rock last night. It was killer. After that, he even played “Refugee” which is a tune I’ve only heard him do once, maybe. The encore was one of my all time favorite songs “You Wreck Me” followed by “American Girl” which would have felt obligatory had the Heartbreakers not brought so much energy to it. When the lights came up, I was ecstatic. Even the Rock Chick turned to me and said, “That was a great, great show.”

I must also mention, the opening act, Joe Walsh. Joe is such a consummate showman. The things he did to his guitar could be classified as abuse. It was fantastic. “The Bomber” was a guitar workout like I haven’t seen in a while. The middle section of “The Bomber” where Joe sounds like he’s playing classical music on electric guitar was even better live. As my friend drummer Blake would say, he’s a very tasty guitarist. People take these amazing guitarists for granted… nobody can play like Joe (and later Mike Campbell) did. Cherish these guitarists people, they’re a dying breed. When Joe said, “I know there are a lot of millennials here, and most of these songs were done before you were born. Let me just say, welcome! This next song, however, is going to make your parents really happy…” and then launched into “Funk 49,” I almost wept with joy. In the words of my friend Stormin who saw the show two nights earlier at Red Rocks, “Joe Walsh is crushing it right now.” And, I’d be remiss, if I didn’t mention the beautiful gesture of Joe dedicating his cover of “Take It To the Limit” to his “brother and bandmate,” Glenn Frey. Class move, Joe, class move!

Last night was a celebration of Tom Petty and the Heartbreakers 40 years as a rock band. But it was more than that, it was a celebration of rock and roll and live music. It was a celebration of the communal aspects of concerts. Different people from all over coming together in unison to drink a little, sing a little and enjoy a whole lot of great music. The temptation to skip seeing that favorite band can sometimes be strong. Many times you think “I’ll catch them next time…” I’m telling you people, get out and see live music… there will come a time when these bands will disappear and you’ll wish you had…

Simply put, a magnificent show last night. Kudos to the crowd! And of course, Happy Anniversary Tom Petty and the Heartbreakers.