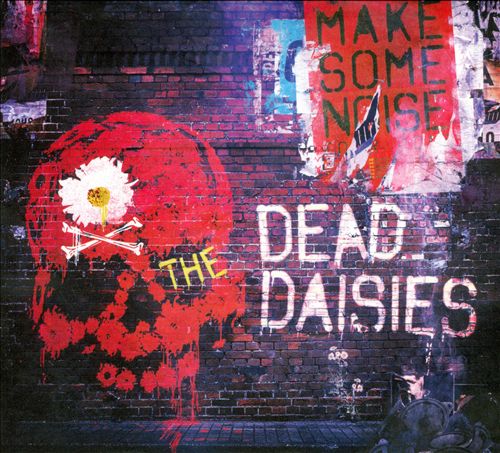 Maybe it was the release of Metallica’s hard, heavy metal single, “Hardwired” that put me in a hard rock/heavy metal mood, but all weekend long I found myself searching out something loud to listen to. I needed some “rawk!” Maybe something a little less punishingly hard than the excellent “Hardwired…” I needed some 80’s style metal. Luckily, my friend Drummer Blake reached out and mentioned a band to me that I’ve been hearing about lately, the Dead Daisies. I had some vague ideas that they were a hard rock band but wasn’t sure what to expect. Drummer Blake assured me, “all members (of the Dead Daisies) are monster players.” Man, he wasn’t kidding.

The Dead Daisies are almost more of a musical collective than a band, sort of like the Queens of the Stone Age. They have some members who seem more or less permanent but they’ve had quite a few folks revolve in and out during their brief history. Members past and present have played with Motley Crue, Whitesnake, GnR, Thin Lizzy, INXS, the Cult and even some of the backing members of the Rolling Stones and Xpensive Winos. That’s quite a pedigree, if I do say so myself.

Is it possible for a band to be a “Supergroup” if its members all come from bigger bands, but no one has ever heard of these particular musicians? The most well known guy currently in the band is John Corabi who is most known for his one LP stint as lead singer of Motley Crue… and here I thought Corabi was a rock and roll footnote… boy, was I wrong. Doug Aldrich is the lead guitarist (who actually came in to replace Richard Fortus who left with Dizzy Reed to rejoin GnR on their spectacular reunion tour). Aldrich apparently played guitar with Whitesnake and Dio and the guy can shred. The line up is filled out by Marco Mendoza (Thin Lizzy) on bass, Brian Tichy (Whitesnake) drums and David Lowy on rhythm guitar.

“Make Some Noise,” their current album, which came out on August 5th is a hard rock party. I really had a lot of fun listening to this album this weekend. The music reminds me of Slash’s last solo album with Myles Kennedy, “World On Fire.” That’s not to say Aldrich is as good as Slash, nobody is as good on lead as Slash but Aldrich can play. The tunes on this album have a similar sound. “Long Way To Go” kicks the album off like a cannon shot. It may be my favorite song on here. But there are many stand outs here – “Last Time I Saw the Sun,” “Mainline,” and “Freedom” are all kick ass, upbeat hard rock tunes. These guys rock like it’s 1987 again and I mean that as a compliment. In one tune I even heard somebody mention cocaine… ah, the 80’s.

The band does two really great covers, CCR’s “Fortunate Son” in what may be the most muscular, rocking version of that song ever done, and The Who’s “Join Together” to end the album. Full disclosure: I love both of those songs, so I’m prejudiced, but those covers are perfect for this band. I especially like to turn up the volume on “Fortunate Son.” The title track, “Make Some Noise” is a shout along stomper that could have been lifted from a Quiet Riot album… Ah, the flashbacks…Needless today, there are no ballads here…If you rock this well, who needs to slow it down for the chicks.

I’m not seeing a lot about these guys in the music press or hearing any of this great rock and roll on the radio, terrestrial or satellite, but if you dig hard rock, do yourself a favor and check out “Make Some Noise.” I found myself smiling all weekend while I listened to this album. Pour yourself something strong and that smile might even cross your face too!

Double Devil Horns to all of you!