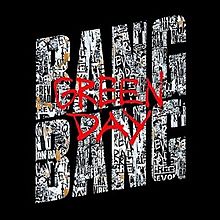 I was once again forced by my corporate overlords to travel to California this week. I actually ended up in San Francisco for most of the week, which is coincidentally only a bridge away from the home base of Hall of Fame Punk Rockers, Green Day. Ironically, it was only last weekend I lamented that Green Day were overdue for some new music,  and whilst I was in their neighborhood, Green Day drops a new single on the world. As I read on line recently, I’m not sure if that’s truly irony or just coincidence, because Alanis Morissette really confused me on the whole “ironic” thing but I digress.

I was beginning to worry about Green Day. It’s been four years since they’d released three albums at once, “Uno,” “Dos” and “Tre.” Billie Joe Armstrong had a very public meltdown and ended up in rehab for addiction to prescription drugs. It goes back to what I always say, kids, stick to dark brown, murky, fermented fluids. Pills and powders only lead to trouble. A few years ago Billie Joe did release a beautiful, quiet duets album of Everly Brothers’ covers with Norah Jones, “Foreverly.” And while I loved that record, it’s not exactly punk or even rock. It’s not a record I’d put on at a party. It’s more of a, sitting on the roof with a tumbler of Blanton’s and a cigar kind of a record.

I am probably the only person who really dug the trio of albums they released in 2012. Like everybody I got on the Green Day bandwagon when “Dookie” ruled the world. That album was inescapable. I eventually sold it, it was so overplayed. “Insomniac” and “Nimrod” never really interested me and it wasn’t until I met the Rock Chick and she reintroduced Green Day to me that I got back on the bandwagon. On one of our early dates, I took the Rock Chick to the record store and she bought a giant stack of CDs which included Green Day’s “Warning.” Wow, that album knocked me out. Overlooked masterpiece? I think so.

Then Green Day went into this “punk rock opera” phase that was hit and miss. I liked “American Idiot” but “21st Century Breakdown” was a bit “meh” for me. When they announced the trio of records in 2012 I was excited as it appeared they’d come out of the rock opera phase and were going back to their punk rock roots again. And, while I loved those records, they were pretty polished for a punk rock band. It was a return to shorter songs, freed from any “story cycle” but the rough, punkier edges had been sanded off. The Rock Chick immediately dismissed the music as overproduced schlock and despaired of bands growing older and losing their edge. I eventually got her to slip “Stay The Night,” “Makeout Party,” “Kill the DJ” and few others onto her “Green Day Playlist.” Even Billie Joe Armstrong admitted that they were striving for a more punk sound but ended up getting the opposite on those records. I don’t care, “Kill the DJ” is still a great Green Day song, no matter what anybody tells you.

I have to tell you, “Bang Bang” was everything I thought “Uno,” “Dos,” and “Tre” were going to be. It’s a raw guitar sound that I just love from these guys. Tre Cool’s drumming on this tune is amazing, he’s simply one of the best drummers out there. Mike Dirnt’s bass line is in the pocket, baby! (I’m not even sure what that means… but the bass line is awesome) This tune rocks with an urgency I haven’t heard from Green Day in a long time. The lyrics feel torn from the headlines. The song tells the story of a mass shooting from the viewpoint of the deranged shooter. Controversial, perhaps – but it certainly makes the point that maybe, just maybe, we ought to rethink gun laws around here. “I want to be a celebrity martyr” howls Billie Joe Armstrong and you almost worry he’s armed. It’s chilling, thought provoking and it rocks. What more can you ask for from rock and roll. I was reminded of some of the stronger political stuff the Clash did back in the day. If the rest of the new album, “Revolution Radio” (a title I just love) is as strong as this first single, this is going to be not only a great album, but an important album.

Turn it up loud on this hot summer day and enjoy!