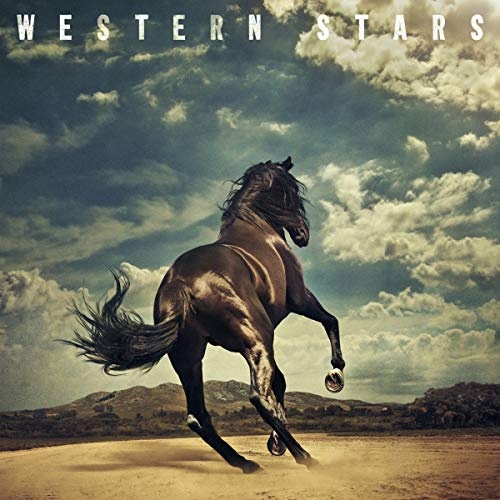 I had been hearing for a while that Springsteen had cut a solo album, heavily influenced by Jimmy Webb, whose songs were made famous predominantly by the legend Glen Campbell. The most famous of those tracks was “Wichita County Lineman.” Interestingly enough, I saw the Stones in Wichita one time with my old college buddy Drew. The Stones did “Wichita County Lineman” and Mick said, “Everybody who plays Wichita probably plays this track, but here’s our version…” Drew said, “Actually, nobody ever does that song here.”

Hearing Springsteen was doing a Jimmy Webb/Southern California-70’s style album had a lot of people concerned this was going to be a country album. A lot of artists like say, Bon Jovi have done a country album late in their career as a crass commercial move. I will give country fans credit where credit is due… they still buy albums and CDs. And if they could they’d probably still be buying 8-tracks. Well, that’s only a theory…tip of the Stetson to you country folk out there. Hearing Western Stars and spending the last few weeks with it, I can tell you, it’s not country. It has more in common with Burt Bacharach’s sound to me.

I’ve had a real mixed relationship with Springsteen’s “solo” work, ie, his work without the E Street Band. I grew up in the midwest, which was Springsteen flyover country. He was big in the Northeast and the Ohio Valley… even down the eastern seaboard. He was big on the edges of the country. Chicago and California embraced him. In Kansas City he wasn’t really that big of a deal until later. Maybe radio programmers thought he was too “east coast,” whatever that means.

In 1979 I absolutely fell in love with The River. It was the first album with songs that got significant airplay in KC and so I made that huge double-LP investment and bought it. It was all over stylistically and I love every track on that album. I just loved the whole concept of this gang – The E Street Band. It all sounded so cool…and yes, I liked the way they dressed, homeless chic. Where was this E Street, and how do I get there? I slowly worked my way backwards through his wonderful early catalog. I was just back home from a very difficult first semester in college during my freshman year for Christmas break and was in the mall with my then-girlfriend and we passed by one of the record stores. Out of the corner of my eye I saw a rack full of Nebraska albums. I hadn’t heard any of the music, or anything about the album, but it was Springsteen, hells yes! I dropped my girl’s hand and went lunging into the record store. I was not emotionally prepared for the bleak music that poured out of my speakers when I got home that day. I realize Nebraska is a classic, but it took me a long, long time to appreciate it. You won’t hear that album at a party.

The next solo album by Springsteen was Tunnel of Love. There were cameos by the band, most notably Nils Lofgren’s amazing guitar solo on the title track, but it was a Springsteen solo project. I love that album, it’s a masterpiece. After that tour Springsteen went solo and fired the E Street Band. The resulting two albums, released on the same day, Human Touch/Lucky Town were a bit of a mess. Human Touch was overly produced and sounded labored. Lucky Town was lyrically rich but plodding musically. I still think there is one good album hidden in there… (iPod Playlist – Springsteen’s ‘Human Touch’/’Lucky Town’ LPs at 25: The B&V Single LP Edit). There are some great songs scattered across those two discs.

His next solo project was The Ghost Of Tom Joad. Other than the title track, I don’t think I’ve heard a track from that bleak album since…although “Youngstown” was a live staple. Devils and Dust recorded after he’d reunited with the E Street Band was topical but a truly great album. Like I say, it’s been an up and down road for me on Bruce’s solo stuff. All of his records have gems on them, but on his solo stuff you have to dig a little. Wrecking Ball certainly had a few great songs but overall, not my favorite Springsteen.

Western Stars,  while not country, is certainly country tinged… you’ll hear a pedal steel on a number of the tracks. This album, and I’d call it a genre exercise, is more of a sepia-toned, Southern California, 70s singer-songwriter album. There are strings on each track here that would make a young Elton John jealous. Springsteen’s voice, along with the strings, are front and center on this record. The other instrumentation is almost superfluous. You certainly aren’t going to get any screaming guitar solos here. He sings his ass off on this album. The vocal on There Goes My Miracle may be the most ambitious he’s ever done. These songs are, as the kids say, as melodic a.f. Sonically, this is as about as far away as you could get from Nebraska. It’s the lush kind of album you just don’t hear anymore.

This album conjures wide-open spaces, specifically in desert parts of the country like southern California, Nevada or Arizona. There is no social commentary in these songs as has been his more recent m.o. The songs are filled with drifters or men who are on the downward slope of life and somewhat down and out but the album is far from a bummer. Many of the protagonists are preoccupied with lost love or lost opportunity. The sun seems to always be going down. Most of the characters on this album could be described as a troubled Wichita lineman… There’s a sense of movement, or rather desperate men racing away from something… or finding escape through hard work under a big sky… with the past always near behind. I’ll be the first to admit, this album is somewhat monochromatic. It’s like Picasso’s blue period. Say man, try a little red.

The album opens with a pair of drifter tracks. “Hitchhikin'” opens the album and the first thing you hear is Springsteen’s voice, a perfect place to start. That leads into “Wayfarer,” which is the story of the hitchhiker if he had a car. While the first track has a nice acoustic guitar driving it, the second is all strings. The down on your luck theme continues later with the title track which tells the tale of a has-been actor, trading on his past glory for chicks and free drinks. “Drive Fast (Stuntman)” is the story of, obviously, a stuntman, near the end, hobbling around on “pins in my ankle.” “North of Nashville” finds a singer who never quite made it in the Country Capitol. All the protagonists mourn a lost love. While the songs all explore similar themes they’re all unique.

Lost love as a theme continues on “Sundown” “Stones” and “Moonlight Motel.” As a man who is no stranger to heartbreak I found these tracks all very moving. Although even I’ll admit “Stones” gets a tad repetitive. “Chasing Wild Horses” is the story of a guy with a temper issue who wears himself out at work each day to avoid fighting anybody at night. Like I said, its a bunch of troubled Wichita County Linemen…

The best tracks here, to me, include the first single, “Hello Sunshine.” That’ll be the track on the greatest hits packages going forward. It’s a classic tune, Review: Springsteen’s New Solo Song, “Hello Sunshine” From The Upcoming LP ‘Western Stars’. “There Goes My Miracle” is my favorite in a long list of strong vocal performances. Lately, and I don’t know why, I wake up with the refrain in my head, “there goes my miracle, walkin’ away.” On “Tucson Train” a man “down and out in Frisco” waits expectantly on his lover to arrive on the train to make everything better… why she isn’t taking the bus which is cheaper and faster, we’ll never know. I love a good train song and this one is the happiest track here.

There’s really only one song on this album I don’t like. It’s the change of pace, upbeat, Tex-Mex (almost zydeco) track, “Sleepy Joe’s Cafe.” It’s a bit like “Mary’s Place” on The Rising. It’s meant to be a bit of sunshine amongst a group of troubled characters but it just ends up being annoying. He could have easily cut that track and I’d have been happy.

This album makes me feel like I’m cruising down Highway 1 in California, top down with my shirt unbuttoned, with the wind blowing through my long hair and sideburns like it’s 1973, Aqua-Velva oozing from my pours, cowboy hat on the seat next to me. That’s just my 70s vibe, others might feel differently. I really like this album and urge everybody to check it out, despite it’s monochromatic bent. This is the most engaging, interesting thing Springsteen has done in quite a while.