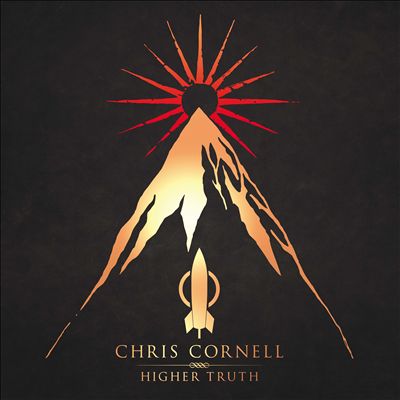 I always used to say Soundgarden was the Black Sabbath of the “grunge” era bands. At the time I was thinking more about the Dio-era Sabbath than Ozzy but I’m splitting hairs here. The thing that reminded me so much of Sabbath was Kim Thayil’s giant riffs. Every song had these dense slabs of guitar that Tony Iommi would certainly envy. The other key ingredient was the amazing vocals of Chris Cornell. I absolutely loved his voice. When Soundgarden broke up, naturally I thought Chris Cornell had a bright future.

The first solo thing I ever heard Cornell do was a song called “Sunshower” off the “Great Expectations” soundtrack in 1998. It was an acoustic based song but it just worked. His vocals were front and center, where they belong. As soon as I bought that song, it went into high rotation for the wife. Although I think her attraction to the song may be based more on the fact she considers Mr. Cornell very easy on the eyes. Chicks…

It was with great anticipation that I purchased Chris’s first solo album, “Euphoria Morning”. Maybe it was just me, maybe it was the fact that he was trying to totally break with his Soundgarden past but I was majorly disappointed by “Euphoria Morning”. “Can’t Change Me” was about the only tune I could connect with. Shortly after that Cornell joined Audioslave, a band I really enjoyed but it was an odd mix. Rage Against the Machine’s remaining members teamed with Cornell. How that combo actually survived to make 3 strong albums is a mystery to me.

After Audioslave, Cornell made a couple of forgettable, if not bad albums. His collaboration with Timbaland, “Scream” was particularly head scratching. It was quite possibly the worst thing I’ve ever heard Cornell do. After that he got back together with Soundgarden for a very strong reunion album. I started to think that Cornell could only function within the construct of a band, that as a solo artist he was a washout, which was a real disappointment for a guy of his talent level.

A few years ago I read that Cornell had been approached by someone who said they loved Johnny Cash’s version of “Rusty Cage” (I mean, who doesn’t love that song or Johnny Cash for that matter?). The person told Cornell that he couldn’t really understand the lyrics of song until they heard the Cash version. Inspired, Cornell went out for a solo acoustic tour which resulted in the overlooked, great live album, “Songbook”. His voice in an acoustic setting, like “Sunshower” really worked. He sang songs from Soundgarden, Audioslave, Temple of the Dog and his spotty solo career mixed in with a few choice covers.

When I heard the first single from his new album, “Higher Truth” I mentioned that it felt like the song was informed by that solo, acoustic tour. For once, and it’s rare, I was right according to what Cornell told Rolling Stone magazine. This is an acoustic based record which makes it sound like its a “mellow” record. Listening to it however, it doesn’t feel mellow. The way Chris Cornell sings, even ballads have an intensity. I will say, that after all the misfires on his solo career, Cornell has finally come through with a great album. Again, like “Sunshower” it focuses on putting his voice out front and surrounding it with acoustic guitar and some percussive elements. It’s not a folky album – although I was somewhat reminded of Bob Dylan’s “Another Side of Bob Dylan” which was a rock album without the instruments.

Luckily for “Higher Truth” Cornell didn’t rehire Timbaland but instead turned to a veteran producer of the “grunge wars”, Brendan O’Brien. Brendan has worked with a diverse number of acts including Pearl Jam, AC/DC and Bruce Springsteen. I really like this guy’s body of work and I must say it was a shrewd choice by Cornell. O’Brien knows how to bring out the best in any performer which just underscores how important the choice of producer is for any artist.

This is quite simply, the best batch of songs I’ve heard from Chris Cornell since “Superunknown”. Any of these songs could have been easily been translated into a Soundgarden song with the addition of some heavy electric guitar. But I like them better in this stripped down setting. For me it’s all about Cornell’s voice. “Nearly Forgot My Broken Heart” is just a classic. “Before We Disappear” is the best song on the album. The soulfulness of Cornell’s vocal on that one will haunt you. If I could have written a love song like “Josephine” for the wife, I would have done a lot better with her early on. I love the water imagery in the song “Circling”, I find myself returning to that song often. The album does get a little mellow toward the end but listened to as a whole it has a quiet intensity because of Chris’ singing. I highly recommend this album. These are simply put – beautiful songs, sung beautifully.

I remember hearing that Neil Young was the “Godfather of Grunge”. That may be true but the thing to remember about Neil Young is that there are 2 sides to Neil. The electric guitar drenched in distorted feedback of Crazy Horse and the mellow acoustic strummer of “Harvest”. Cornell has shown he can do the electric Neil in Soundgarden. With “Higher Truth” he proves he can pull off the acoustic side as well.

Pour something strong, turn this one up to “11” and enjoy! Cheers!

One thought on “Review: Chris Cornell’s “Higher Truth” – Finally He Comes Through”