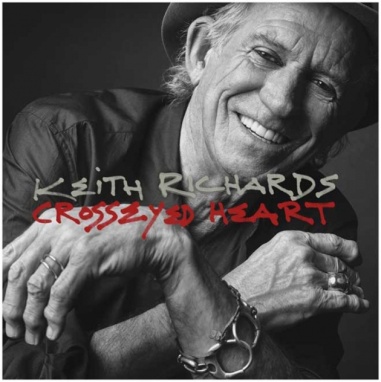 Is there anybody in the world who personifies BourbonAndVinyl more than Keith Richards? I don’t think so. Oh yes, Crosseyed Heart is going to be in “high-rotation” here at the house for quite some time.

I remember being at my friend Jack’s place back in the late 80s/early 90’s drinking giant martinis with blue cheese stuffed olives. I’m still not sure where the blue cheese came from. Anyway, he had his Chicago pal Kurt over and we were grooving before heading out for the night. Kurt pulled out Keith’s masterpiece 1988 album Talk Is Cheap, and started dancing around the smallish kitchen to the great song “Take It So Hard”. I think he was trying to do a Mick Jagger-type move but it looked more like a white man with an overbite running in place. As he was twitching and jumping around, impressively not spilling a drop of his vodka, he looked up and shaking his head from side to side as if in a grand mal seizure, said, “This is what rock and roll is fucking all about man, good times.” Sage words, Kurt, sage words.

I know what many are thinking, Keith Richards, ugh, that voice. I’m the opposite. Like my friend Drew, I always searched the liner notes on Stones albums wondering which tune would feature Keith up front. His songs were amongst my favorite Stones tune. I always liked when I read the words “Vocals: Keith Richards” deep in the credits of a song.

Keith Richards was always a reluctant solo artist. I think he would have been content to out-live us all, simply playing Stones concerts until the end of time. Enter the 80’s and Mick decided he wanted to make music with other people. Naturally Keith didn’t take it well. Since Mick hooked up with Anita Pallenberg, after Keith had stolen her from Brian Jones, there isn’t much Mick has done that has pleased Keith. His pissed off response was to finally do a solo album. Talk Is Cheap was a true rock masterpiece. That album is the best Stones solo album, although I Have My Own Album to Do by Ronnie Wood is an overlooked gem as well.

Keith returned in 1992 with Main Offender, largely with the same group he’d used on his first album, The X-Pensive Winos, but it just didn’t make as much of an impact. Maybe since the Stones had resumed he wasn’t as pissed any more. Steve Jordan was the drummer in the X-Pensive Winos and he returns here on Crosseyed Heart to drum. co-produce and co-write. They wisely brought in their old friend, session guitarist extraordinaire, and X-Pensive Wino alum Waddy  Watchel (Warren Zevon, Buckingham-Nicks, Jackson Browne, etc) to play lead guitar. Waddy and Keith meld guitars like Keith and Ronnie do. “The ancient art of weaving,” as Keith is fond of saying.

This album is a triumphant return for Keith. I heard they tinkered with it casually for a number of years. The music doesn’t feel over-produced or fussed over, it’s simply straight up Keith. It feels like a labor of love. He covers the usual waterfront the Stones cover – not just blues and rock but reggae, country, folk and heart rending ballads. If there is one criticism of Crosseyed Heart, it might be there are a few too many ballads, but Keith has always been a softy. If you look at his tracks with the Stones, there are a preponderance of ballads. The one song that loses me a bit is the rocker “Substantial Damage” but even that tune has a funky rhythm guitar that is infectious.

The rockers on this album are among Keith’s best. The first single, “Trouble”, which I commented on in a “Stray Cats” entry on BourbonAndVinyl previously sounds like an outtake from Some Girls. “Something For Nothing” and “Heartstopper” are great songs. The singular greatest track here is “Nothing On Me”, as in “the cops got nothin’ on me”. No, Keith, none of us have anything on you.

There is a fabulous duet here, with Norah Jones, “Illusions”. Full disclosure – I love Norah Jones’ voice. She could sing the phone book and I’d listen. Plus, were I still a single man, I wouldn’t mind buying her an Old Fashion and seeing where that went… but I digress. I do believe after hearing “Illusions” and watching her and Keith duet on “Love Hurts” on YouTube at a Gram Parson’s tribute, Norah was born to sing duets with Keith.

On the ballads, and there are several, you must check out “Suspicious”, “Lover’s Plea” and “Just a Gift”. The songs remind of “Theif in the Night” or “Losing My Touch” a couple of recent ballads he did with the Stones. These tunes have that Sinatra-esque, closing time, baby-let-me-crash-with-you feel that I have always loved.

The album starts off with an acoustic blues number, more a sketch than a song, the title track “Crosseyed Heart”. It sounds like a lost Robert Johnson track. At the end of the track, Keith can be heard saying, “That’s all I’ve got…” I beg to differ Mr. Richards. As the rest of Crosseyed Heart proves, you have a hell of a lot more. Let’s hope Keith has saved a little for the next Stones record, which they’re rumored to be heading into the studio to record next year…