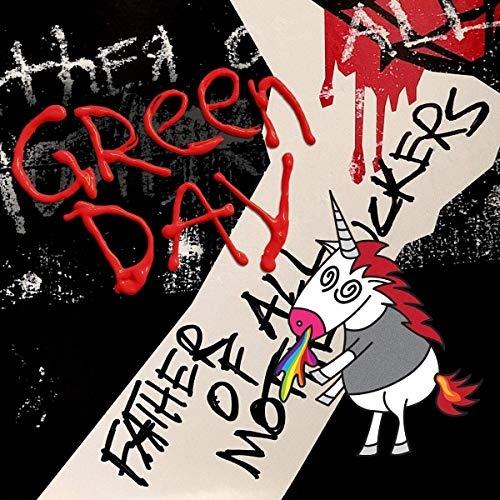 I’ve always considered myself to be a “catalog fan” of most the bands/artists I like. By that, I mean when I find an album by a group I like I tend to go backwards from that point in time and buy all of their albums, i.e. the entire catalog. As an aside, I heard Courtney Love of Hole once describe her band as a “catalog type of band, like Bob Dylan.” Uh, not quite babe. Don’t get me wrong, I like Hole. With most bands, after I’ve secured the back catalog I tend to buy each new album from that point onward. I tend to look forward to these new albums, like emails from old friends.

Green Day falls into that “catalog” type of band Ms. Love was speaking of. I bought Dookie, like we all did. I did not replace it when it was removed from my apartment by a young lady I was dating. You couldn’t escape that record and I’d grown tired of it…I figured let her have the album as I hadn’t provided much else to her. When I met the Rock Chick, one of our first dates was to a record store and she picked up Insomniac and Nimrod. She already had Dookie and the underrated gem, Warning. Suddenly, I was back into Green Day.

I was surprised to learn that after the recording of Warning and the subsequent tour, the band almost broke up. Billie Joe Armstrong, lead vocalist, guitarist and songwriter had hit a writer’s block. There was so much pressure on him to repeat the success of Dookie he had become afraid to even present ideas to the band, Mike Dirnt (bassist) and Tre Cool (drummer). They had to go into couples er, band therapy to work it out. Billie Joe finally admitted he wanted to write something like “Bohemian Rhapsody.” He wanted to move the band in another direction but was afraid to mention it to his bandmates. They emerged with a stronger bond and the hit album American Idiot.

Now, I also subscribe to the great man theory of rock and roll, something I stole from a history class. It posits that there are certain important people, these “great men (or women),” who can have a major effect on rock and roll in their time.  I think about Billie Joe Armstrong this way, the same way I think about Jack White or Beck. I’ve been impressed with Armstrong’s constant search to expand or change Green Day’s sound and approach. He’s always striving for something new. It’s not like he’s releasing a string of albums of oldies (ahem, Rod), he’s pushing the band in different, brave new directions.

They went from the new punks on the block to writing Rock Operas, ala the Who. After a couple of those albums (American Idiot and 21st Century Breakdown) they veered back into non connected, “collection of songs” type records. For reasons unclear, he decided that Green Day should record and release three albums at once, Uno!, Dos!, and finally Tre! (a play on the drummer’s name). Billie famously had a breakdown during the tour for the triptych of albums. He’d bitten off more than he could chew.

Clean and sober, Billie Joe and Green Day returned in 2016 with Revolution Radio, which ironically the Rock Chick didn’t like but I loved, LP Review: Green Day “Revolution Radio,” They retrench and relaunch. Well, I loved that trio of records prior to that, but I think I’m alone in that, but I thought Revolution Radio was a punchy return to form. The Rock Chick feels that they’ve become too polished and are more “arena rock” now. She longs for a track as nasty as “Geek Stink Breath.” She’s not wrong. All rock and roll could do with a little less polish.

Ever the workaholic, while Green Day took some time off, Billie Joe kept working. Like his 2013 duets album with Norah Jones, Foreverly, Armstrong decided to work with a side project. By the way, everyone should check out Foreverly, choosing Norah Jones to sing with him was an inspired choice. I hope they work together again. Anyway, last year Billie put out a side project with a new band, The Longshot, that was more in keeping with his day job in Green Day or his first side project, The Foxboro Hot Tubs. I loved the album and all the EPs they subsequently put out, LP Review: ‘Love Is For Losers’ From The Longshot, Green Day’s Billie Joe Armstrong’s New Side Project, and The Longshot Return (Already?) With A Single and 3 EP’s – Billie Joe Armstrong Can’t Stop!. The Longshot was a rocking good time… certainly it seems that Armstrong was having a lot more fun than he had in a while. I mean, they covered Ozzy’s “Goodbye To Romance” for fucks sake!

Green Day recently released a new single, the title track from an album that won’t come out until February, Father of All… The first time I played the song for the Rock Chick, she stood up and walked out of the room. I have to admit it was quite a surprise. Upon further listens, it does sound like Green Day but that first listen was a stunner. Let me say, first and foremost, Tre Cool’s propulsive drumming is the best thing in this song. I realize Billie Joe wants to drive Green Day in different directions, but he’s deploying a falsetto that sounds utterly foreign to me. I will say the track, after that initial surprise, has grown on me. It’s punchy and has a great punk-like energy. I like Billie Joe’s guitar work on the track. Mike Dirnt lays down an aggressive bass line. It’s certainly not arena rock.

It took me quite a few listens but I finally got to a point where I can say, I don’t hate it. I can’t say I love it, I can’t say it gets me excited for what’s next on this new album like most first singles do. I typically only review stuff I like on B&V, to get the word out there. This post is truly the exception, I’m more baffled than anything. I’ve liked almost everything Green Day has done, so I’m hopeful the album surprises me, whatever direction Armstrong and the lads decide to go in. I’d still recommend checking this song out, but approach with caution, it doesn’t sound like Green Day… which was probably the point in the first place.

3 thoughts on “Green Day: New Single, “Father of All…” – Trying Something New?”