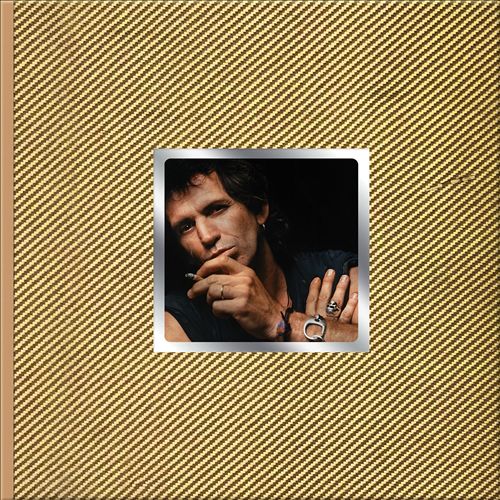 Truth be told, I don’t think Keith Richards ever wanted to do a solo album. His first and foremost love was always the Stones. That’s why we love Keith down here at B&V.

It’s hard to imagine now, but there was a time when Mick and Keith were close friends… thick as thieves you might say. The seeds of discord were sown by many things: fame, fortune, who gets credit for being the genius in the band (something they should both share). I’ve always felt Mick pushes Keith to explore and Keith keeps Mick grounded in their roots… yin meet yang. I’m not sure which of them brought reggae into their repertoire but I’d like to think it was both of them. The mutual animosity is a little like the squabbling between Lennon and McCartney regarding the Beatles’ legacy. I think the thing that killed any true “friendship” between the two comes down to one woman… Anita Pallenberg.

Anita Pallenberg, model-actress and 60s “It”-girl entered the Stones’ orbit as the girlfriend of original lead guitarist Brian Jones. On an ill-fated trip to Morocco, Brian was eased aside and Keith and Anita were suddenly together. Eventually Brian spiraled out of the band. Jagger was cast as one of the lead roles in the movie ‘Performance’ in 1968 and coincidentally so was Pallenberg. Keith has always believed and went so far as to claim in his autobiography (the unreadable ‘Life’) that Mick and Anita “hooked up” on the set of the movie. Pallenberg denied that claim the rest of her life. Mick has denied it as well. If it happened, Mick probably saw her go from Brian to Keith and thought it was all fair game… it was the freewheeling 60s after all. What people don’t realize about Keith is that under the outlaw core, he’s really a softy. I think he writes a majority of the Stones’ ballads. Anita and Keith stayed together until 1980 and had three kids. Friends before chicks, Mick… you just never know whose going to stay together.

Anita and Keith were a toxic combination. They both got heavily into heroin. At first Mick and Keith were still able to work together and create magic. But as the 60s waned and the 70s dawned, Keith’s addiction kept getting worse. Once partners at the helm, suddenly Mick found himself without Keith. Mick had to take control of the Stones to keep them afloat. Unfortunately, I think Mick learned that he liked control.  Keith’s heroin addiction reached its low point in 1977 when Keith was arrested for possession and intent to traffic in Canada. The trafficking charge was leveled because of the sheer volume of heroin they found on Keith, so prodigious was his appetite for smack. Keith was facing some serious weight in terms of fines and prison time. It appeared the Stones’ very future was at stake.

Keith and Anita went in for electro-acupuncture rehab therapy to kick heroin. The Stones decamped to Paris and recorded as much music as they could in the fear that Keith would be put away in a Canadian grey-bar hotel. The music they recorded made up not only the album Some Girls but most of Emotional Rescue and Tattoo You as well. Luckily, the rehab “took” and the Canadians let Keith off with a fine and an agreement to play two charity shows to benefit the blind. As Keith tells it, at that point, he was ready to return and join Mick to help in the steering of the Stones. It appears Mick had grown too accustomed to driving the ship and didn’t feel he needed the help… the old animosities were refreshed and deepened.

By the 80s everybody was used to the two of them sniping at each other. While Tattoo You and the ensuing tour were seen as career highlight for the Stones, 1983’s Undercover was only met with lukewarm reviews and response from fans. An invigorated Keith wanted to tour behind the album, the man does love to take the Stones out on the road, but Mick refused. Mick committed the ultimate treason in Keith’s eyes, he had signed a solo contract and was going off to do his first album on his own. I remember when it came out in 1985, I was totally a Mick guy at the time, and I was really looking forward to it. To say that She’s The Boss was a disappointment is an understatement. I liked the first single,  the reggae tinged “Just Another Night” but the rest left me cold. I found “Lucky In Love” to be the most embarrassing moment, but most of the rest of the album was forgettable. Mick got the control he wanted in the studio, but lost the magic. He was trying too hard to be current vs doing what he did well, which was rock and roll.

When Keith corralled the Stones back together in 1986 to record again, the band was a mess. Ian Stewart, long time keyboardist and tour manager passed away. Keith was particularly shaken by that loss. Charlie Watts who had survived the 60s and 70s without  any major problems had become a heroin addict. And worst of all, Mick wasn’t terribly interested in doing another Stones album, let alone touring. He was working on his second solo album. Perhaps he felt some pressure to erase the failure of She’s The Boss. The resulting album Dirty Work has become a bit of an orphan. I still think its got some great stuff on it, but it stiffed with the public. The video for “One Hit To The Body” (a kick ass tune, by the way, one of many on that LP), showed Mick and Keith practically coming to blows. Keith has said that the band would work on the tracks and Mick would show up, not even remove his coat, rush through his vocals and leave. When Mick refused to tour, like he did for Undercover, it appeared the Stones might finally be over.

1987 found Mick putting out an even worse solo album than his debut in Primitive Cool. The video for “Let’s Work” is better left never seen… Keith was at loose ends so he assembled a band for a documentary celebrating one of his heroes, Chuck Berry, entitled ‘Hail, Hail Rock And Roll.’ Charlie started a jazz combo. Bill Wyman opened a London restaurant and Ronnie Wood opened a Miami nightclub. When Jagger decided to tour Asia and Australia for Primitive Cool, Keith finally decided to do the thing he had never wanted to do… he decided to record a solo album. He’d done a few one off singles and sat in with both the Faces and Ronnie Woods’ New Barbarians, but he’d never wanted to go solo.

Rather than go the Jagger route and assemble a bunch of session guys to back him up, Richards, the more natural musician vs Jagger, chose to put together a band. Although in Mick’s defense his back up band did have Joe Satriani at one point… Anyway, having met drummer Steve Jordan and bassist Charlie Drayton during the Chuck Berry film, Keith quickly recruited them to join him in the band. They recruited Ivan Neville, son of Aaron, to play keyboards. Keith had found a bedrock rhythm section to go with his riffing rhythm guitar. All he needed was a lead guitarist to play against… Brilliantly he recruited Waddy Watchel, who had played with Warren Zevon, Jackson Browne and at the time, Stevie Nicks. I remember seeing Keith interviewed and saying, “Yeah, Waddy had been playing with chicks for too long, he needed to come play with the boys.” Steve Jordan was not only a drummer, he was someone who could co-produce and more importantly write songs with Keith. Early in the recording process Keith caught the band hiding behind the drum riser, passing a bottle of Chateau Lafite. Richards immediately dubbed them, the Xpensive Winos, which I just love.

Most people, I think, kind of groaned when they heard that Keith was putting out a solo album. I’m a rare breed of guy. I’m one of the few folks that when a Stones album came out, I’d drop the needle on it and peruse the liner notes looking for the Keith song. I always seemed to love the tracks he sang. Whether it was “Before They Make Me Run,” “Coming Down Again,” or even his brief bit in “Memory Motel,” I just loved it when Keith was at the microphone. I was thrilled when I heard that Talk Is Cheap had finally come out. However, in 1988 I was in my self-imposed Arkansas exile. It wasn’t until the video for the first single, “Take It So Hard” came out that I got to hear any of it. As soon as I heard that riff, and then the band kicked in, I knew this album was something special. To the record store I went.

When I dropped my new copy of Talk Is Cheap on the turntable in my lonely, hovel of an apartment in Ft Smith, Arkansas those many years ago, I realized I was hearing something special and also suddenly realized I was dancing around. This was the raw sound and grit of the Stones that I’d been missing. When the first song, “Big Enough” blared through the speakers I realized this was going to be a groove album, heavy on riffs and sloppy on structure. That’s what Keith brings to the Stones. It’s hard not to hear many of the songs on this album, “Take It So Hard,” “Big Enough,” and especially “You Don’t Move Me” as being specifically addressed to his old bandmate and friend, Mick. I remember years later dancing around my friend Doug’s kitchen with his buddy Kurt – a man who can still drink more martinis than I ever could – and Kurt saying, “This is fucking rock and roll!”

There’s an old boogie woogie number, “I Could Have Stood You Up” that features Chuck Berry’s original pianist Johnnie Johnson. Sarah Dash comes on to do a lovely duet on “Make No Mistake,” a clear eyed ballad that manages not to be mushy or sentimental. There are a few other guests – Maceo Parker does some sax, Bootsy Collins plays bass on a track, even old Stone Mick Taylor shows up on a cut – but the bulk of this album was just Keith and the Xpensive Winos. Every track grooves or moves and the album is a triumph. This is an album every rock and roll fan should own… In some ways, I think Keith’s solo success forced Mick back toward the band.

Now we have the 30th Anniversary “Deluxe” edition out. And what a great celebration it is. It is, as you would expect, newly remastered. More importantly for us at B&V, it has a handful of bonus tracks. The thing the bonus tracks does for me, more than anything, is show the mood of the recording sessions. You can tell Keith and the band are having a great time. There are a couple of instrumental jams, “Blues Jam,” and the 10-minute “Slim” that showcase what a great band this really was. The best new tracks from those sessions are “My Babe” and “Big Town Playboy” a couple of old blues covers Keith puts his heart into. “Mark On Me” sounds more like a true outtake as does the other instrumental “Brute Force,” as opposed to the band jamming or playing around on some old covers. There’s not a ton of bonus material here but what there is is high quality. The instrumental stuff is probably more for fans only but I’d recommend the covers highly.

This is a great celebration for a 30th anniversary of an important solo work of one of the greatest rock and rollers of all time. Cheers!