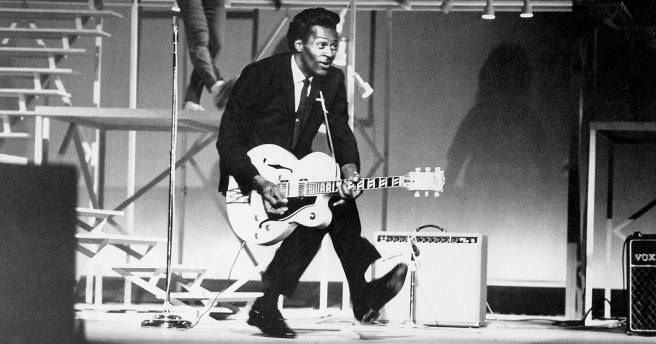 I know I’m late to the game on mourning Chuck Berry… Unfortunately, my Corporate Overlords have had me sequestered in Las Vegas at a conference since Saturday when the news broke that the Rock’n’Roll Legend Chuck Berry had passed away at the age of 90 years old. I haven’t had a chance to come up for air to express the sadness I feel at his passing. I hate it when work interferes with music. When I go out to Vegas for these conferences it’s a bit like entering Biosphere… I don’t see the sky or the sun for seven or eight days. Likely everything I could say, will have already been said, but Hell, I don’t even know what’s been said. I’ve been under what feels like house arrest at a casino for a week….and I’ll admit, there are worse places to be under house arrest, but I digress.

If I were to sculpt the Early Rock Music Mount Rushmore, it would have Elvis (The King), Fats Domino, Buddy Holly and naturally, Chuck Berry. These artists are the foundation for everything that came after them. The influence of those acts is indescribable. As anyone who has read B&V before knows, in my opinion America has had many Presidents, but it’s only had one King… and that’s Elvis Presley. But, that said, the Vice President of Rock and Roll, for me has always been Chuck Berry. The thing I always loved about Chuck Berry besides the great songwriting, was that he was the first Guitar Hero rock star! Yes, Elvis had the moves and the voice… but Chuck not only sang and duck walked, he played a mean guitar.

And what a guitarist he was. He never gets the credit that is his due on the six string… So many people were influenced by Chuck Berry as a guitarist – there would be no Keith Richards without Chuck Berry – its difficult to overstate his influence. John Lennon once said, “if you want to find another name for rock ‘n’ roll just call it Chuck Berry.” Everyone who got big in the 60’s/70’s either covered Chuck or wrote a song like Chuck would….

The Beatles did “Johnny B. Goode,” “Roll Over Beethoven,” and “No More Monkey Business.” As solo artists John Lennon (“You Can’t Catch Me”), George Harrison (various tunes) and Paul McCartney (“Brown Eyed Handsome Man”) each covered Berry either on record or in concert. The Stones most famously did “Carol,” a real gem of a cover and also “Around and Around” on ’12×5′ their second (and an essential) album. The Stones later did an original tune, “Star Star” that is as pure of a Chuck riff as I’ve ever heard. Berry was as much of an influence on the Stones as the Blues giants they imitated in their early days. As a solo artist Keith Richards covered “Run Rudolph Run” as a Christmas single and produced the fabulous documentary “Hail, Hail Rock N Roll” around a special Chuck Berry concert.

I’ll never forget a scene in “Hail, Hail…” where Berry is schooling Richards on a tune they’re playing in rehearsal. Keith plays the riff, and to these uneducated ears it sounds perfect. Chuck stops the band and says, “If you’re going to play it, play it right…” then lays the riff down again. Keith, clearly agitated, listens to Chuck replay the riff and realizes, yes, he got it wrong. Keith then dutifully replays the riff exactly as Chuck did. I fell out of my theater chair. The perfection was spectacular.

Artists as diverse as Bruce Springsteen and REO Speedwagon, yes REO, covered “Little Queenie.” Although you’ll have to find Springsteen’s version on a bootleg… you’re on your own there. The Stones covered it live as well. “Let It Rock,” which is a mammoth tune was covered most famously by Bob Seger and became his de facto concert ending/encore song. I saw Drew Abbott, Seger’s guitarist play that song at Kemper arena one time and it was mind blowing. Seger even name checks Berry on “Rock And Roll Never Forgets,” when he says “all of Chuck’s children are out there playing his riffs…” If anybody has heard the early Seger tune “Get Out of Denver” I defy you to tell me that’s not a Chuck Berry influenced tune. The fast, galloping, nasty guitar riff is signature Berry. Hell, Jerry Garcia covered “Let It Rock,” and it was oddly wonderful.

One of my favorite covers of a Berry tune is, and yes, those of you who have read B&V will have already guessed, The Faces doing “Memphis.” Ronnie Wood plays a wonderfully distorted guitar line and Rod Stewart just nails the vocal. The only Berry cover by those guys I like as much or better might be “Sweet Little Rock N Roller” done on Rod’s under rated solo disc, ‘Smiler.’

The list of covers could go on and on… Let me just say that every band you love, if you love classic rock, was influenced by Chuck Berry. Hell, AC/DC did “School Days.” I can’t list the number of acts who’ve done “Sweet Little Sixteen” or “Reelin and Rockin.” Linda Ronstadt even did “Back In the USA.” I mean, holy shit, Linda Ronstadt? What’s next, my wife’s cat doing “Maybellene?” If only….

Chuck wasn’t perfect… a lot of rock and rollers and musicians also had a dark side. Elvis, James Brown… name anybody who made it big and they probably had demons they were wrestling with. But those demons fueled the artistry that created some of the greatest rock music ever heard.

Chuck Berry was a true American original. While he’s left us, his influence will always be felt when a guitarist steps to the front of the stage and lays down a nasty, beautiful, dirty, fast riff.

RIP Chuck! You are already missed!

Put on “Maybellene” this weekend and play the – “how many songs were based, in part, on this song” game – the list will be long…. Hail, Hail, baby!