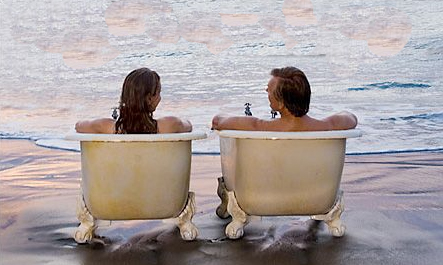 I think I speak for everybody in America and beyond, no matter what your political persuasion, your political party, right or left, when I say, I’m tired of this Election. I am suffering and have been for quite a while now from Election Fatigue. Just once I’d like to watch television and during the commercial breaks see a wacky local car dealer who mistakenly thinks he should be in his own commercials. Or I’d like to see a commercial for Cialis with the couple sitting in adjoining bath tubs holding hands, which I’ve never really understood, if you’re on Cialis shouldn’t you be sitting in the same bathtub (the guns loaded, you need to pull the trigger)? Who would have thought I’d miss those commercials? All I see these days is point-counterpoint. I often see opposing politician’s commercials in the same break. Politician A accusing Politician B of being a traitorous bastard only to have the next commercial accuse Politician A of being the real traitorous bastard. None of this shit gives me a very positive vibe. I don’t know exactly when we became such a divided nation, but it appears to be getting worse.

Putting all the bile aside is becoming increasingly more difficult. I have stopped watching the news altogether, it’s too depressing. I am just pleased that in a mere five days, this great National Nightmare will be over. Don’t get me wrong, I am extremely lucky to have been born and raised in a free, democratic country. The fact that every four years the populace is allowed to stand in line and go to the polls for a peaceful transfer of power is one of the greatest things on the planet. Not only is it a great thing, it’s a God damn inalienable right. But as much as I love Democracy, it took a whole lot of bourbon to get me through this one.

Well, if you’re like me, although I’m five days early, the only thing besides bourbon that’s going to get you through this negative, spiteful election is rock and roll. I’m not a political person per se. I vote, I always have, in every election from Reagan to Obama. I’m not tied to any party, I’m just looking for the best guy at the time. I like to think of myself as a hedonistic, moderate, centrist independent who enjoys fermented liquids and loud music. Although to the right I look like a communist and to the left, well I don’t know what I look like to them. I am genuinely concerned about the state and direction of my country.

In reaction to this Election season B&V put together a little play list with tunes that I feel should be taught in high school Political Science classes. The lessons may not sink in, but what a fun class. There’s not strident stuff here. In music I always lean a little more to the hippy, freedom, peace thing. I feel like peace and freedom is something both sides in this quad-annual tussle can agree on. And if you can’t agree on that, you probably aren’t a B&V reader in the first place. As usual, my play list is all over the place – loud/quiet, metal/acoustic… The Rock Chick is probably right, I shouldn’t do play lists… So if I’ve missed any of your favorite Political Science songs, please make suggestions in the comments. I’m always looking to expand these things.

If this track list isn’t to your liking, put on something that you do like. Season to taste, as they say. We all need a little music these days. If the Election doesn’t break the way you want it to – celebrate Veteran’s Day (aka Armistice Day) on Nov 11th like my pal Drummer Blake, by playing some loud rock and roll (Although in Blake’s case he’s actually playing the instruments not the radio, like me). At least Veteran’s Day is something we can all agree should be celebrated.

These are dark times… pour something strong and turn it up loud… Cheers!