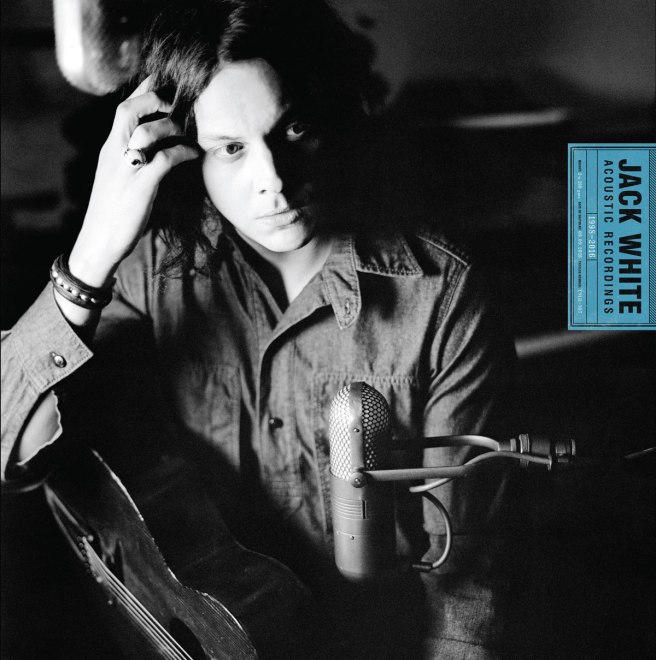 As anybody whose read B&V before knows, I’m a huge fan of archival releases. If an artist has anything in the vault, I’m typically interested. Be it Bob Dylan’s official “Bootleg” releases, Springsteen’s “Tracks” or Van Morrison’s “Philosopher’s Stone,” count me in. Sometimes there’s a hidden gem in there, something the artist for whatever odd reason decided not to release. Maybe it didn’t fit the album it was recorded for. Musicians, what are you gonna do? If there’s a rare B-side tucked away in there, count me in…”what? there’s an acoustic demo with a saxophone… shit I’ve gotta have that.” I think the thing that draws me in the most when an artist opens up the vaults and releases stuff from their archives is that it many times provides an insight into their creative process. Of course, the Rock Chick says I’m just a obsessive compulsive “completist.” Which, sadly, may also be true.

With that as a backdrop, it probably comes as no surprise that when I heard Jack White was releasing something called “Acoustic Recordings 1998-2016” that I’d be forced to investigate. I’m a huge Jack White fan. I think of the White Stripes as one of the really great bands of all time. Their fusion of punk and blues was something I didn’t think was possible. I was lucky enough to see them on the “Elephant” tour (and several others) and Jack White simply amazed me with his energy and his lead guitar/keyboards/vocals. I had a buddy who saw him on his last solo tour and he compared it to seeing Hendrix (not that my buddy ever saw Hendrix, but he was that impressed with Jack’s guitar playing)… high praise indeed. I even followed Jack to the Raconteurs but I was only really interested in the tracks where he was the lead singer. “Steady As She Goes,” and “Blue Veins” from the first album and “Carolina Drama” from their second record stand out amongst his best. The Rock Chick dug the Dead Weather where Jack supposedly only played drums, and did some limited vocals, and I liked those tunes too. Jack is so charismatic that he’s going to pull the focus in any band he’s in.

With all that guitar hero talk it’s often easy to forget that the White Stripes and Jack’s solo stuff also has a strong acoustic element. “Hotel Yorba” and “We’re Going to Be Friends” immediately spring to minds as Stripes’ classics. “Love Interruption” has some nice acoustic work over some groovy keyboards. After thinking about those tunes, the whole “Acoustic Recordings” concept started to make sense to me.

The album isn’t released until September 9th but I’ve perused the song list. Unless these are all “alternative” versions, the songs on disc one mostly look like previously released songs. Meaning this is just a way of packaging up the acoustic stuff, no revelations to be found. The second disc looks like it has more acoustic demo/alternative mix stuff on it. We’ll just have to wait and see when the disc comes out.

However, until that time, we do have one song, billed to The White Stripes and Jack White that has been released, “City Lights.” I didn’t recognize the song but Jack was kind enough to add “Previously Unreleased” to the title to help tip me off it was something from the vaults. It’s all acoustic guitar and Jack singing in a minor falsetto. There is some light percussion, but I don’t know (based on the dual billing White Stripes/Jack White) if that is the mysterious Meg White playing the shaker? Call it my Sunday night mood, but there is something about Jack’s acoustic strumming on this song that recalls Led Zeppelin III but that may be the wine talking… It’s a quiet number that finds Jack in a somber mood. It is heavy on their folksy side, perhaps that’s what made me think of the acoustic side of Zeppelin… I almost wonder if this is a plea to Meg to return to the band when he sings, “every move suspends an action, any attempt to engage will push away, what you want becomes a magnet, opposing poles, never meeting.”  I love the imagery of the singer being on a plane headed toward someone… powerful stuff.

“City Lights” is a very good song from Jack White. It makes me hope there are some more alternative mixes/versions on “Acoustic Recordings” to explore. I certainly have something to look forward to on September 9th now…