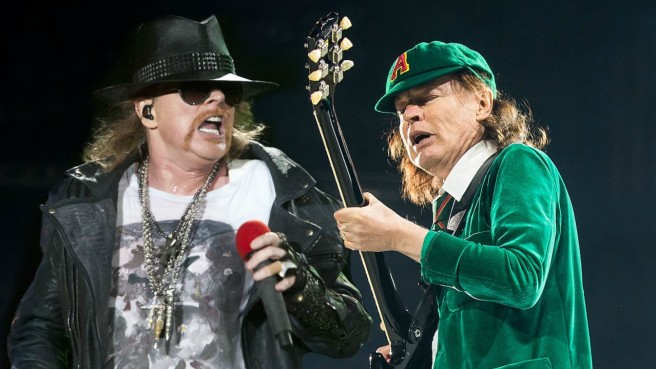 In a post a few weeks ago I mused about a proposed SuperGroup comprised of members of famous bands who were left out of some of these big reunion tours. I cited GnR and Black Sabbath just to name a few. In one of the comments back to me, Moutly58 commented that I should do a post on bands that should call it quits. I chuckled but the comment did inspire quite a bit of thought. Nothing like a provocative comment and a tumbler of bourbon to send me into brooding mode…

This blog was founded on the idea that, other than telling funny drinking stories, I would talk about older, more mature bands and artists who were putting out new music. There are so many great artists putting out music that have been largely ignored by radio and the public, I felt the market was underserved. Tom Petty, both with the Heartbreakers and Mudcrutch, has put out some great music over the last decade that you’re not likely to hear on your local rock stations. You’re lucky if you catch them on satellite radio. I’m more likely to hear “Born To Run” by Springsteen on the radio again (for the billionth time) than anything from his last LP, “High Hopes.”

But Moulty58’s comment made me put my love of those classic bands aside for a moment. I couldn’t help but think, are there bands that ought to call it quits? Are there bands who have stayed at the party too long (which coincidentally is something the Rock Chick accuses me of all the time)? The answer is, inevitably, yes. There are just certain bands that need to hang it up. In many cases it’s due to the tragic loss of a key band member. In some cases these bands are carrying on without key members. Never underestimate the magic chemistry of the right four or five guys in a room. In many of these cases these artists have just lost something, call it a creative spark…. Without further adieu, here are the B&V bands who need to hang it up:

Aerosmith: These guys haven’t done anything listenable since “Permanent Vacation.” Steven Tyler has some of the worst LSD in the history of rock music. I’m so sick of Tyler and Joe Perry bickering, they make the Stones look like a happy family. Tyler betrayed his blues rock roots and went on a TV show and then recorded a weird country-esque solo album that was crap. These guys can’t even get in the studio to record new music any more. They’ve announced a farewell tour, but we’ve all seen that before. Go away Steven, go away.

AC/DC: These poor bastards. Founding rhythm guitarist Malcolm Young sadly succumbs to dementia. Drummer Phil Rudd becomes a meth dealing moronic thug. Bass player Cliff Williams has announced his retirement. Lead singer Brian Johnson has hearing damage so severe they had to bring in Axl Rose…. I mean,  you’re running on fumes if you have to turn to rock and roll’s most mercurial undependable front man to help you finish your tour. I feel for Angus Young, lead guitarist and lone founding member left. I hear Axl is inspiring Angus to write new music. If so, and he works with Axl again, call it something else, not AC/DC. Parts are falling off of this band faster than my high school car running down the highway.

Eric Clapton: When was the last time Eric Clapton recorded a song that didn’t sound like your grandfather sitting in a rocking chair on the front porch. When you’re known for playing guitar and refuse to do big solo’s… perhaps you’ve lost your way.

Bob Seger: I applaud Bob for putting out a couple of albums of new music over the last few years. He’s always said, when his voice goes, it’s time for him to go… I’ve got bad news for you Bob, your voice has gone. Seger’s voice sounds like a fork caught in a garbage disposal. It’s time to give up the rasping and turn to his vast, unreleased archives. I’d settle for releases of “Seven” and “Back In ’72.”

The Moody Blues: I don’t even think these guys are still around, I just can’t stand the fucking Moody Blues so I included them just in case.

Any Band Missing Key Founding Members; This is sort of a catch all for those late 70’s to early 80’s (think ’75 to ’85) bands who keep hanging around with only 1 or 2 original members. I’m talking to you Styx, REO Speedwagon, Lynyrd Skynyrd, Foreigner (currently touring without Lou Gramm) and most of all, Journey (no Steve Perry?) Give it up guys, you’re not Menudo with interchangeable members. I mean, sure Styx still has James “J.Y.” Young and Tommy Shaw in the band but I can never forgive those guys for letting Dennis DeYoung do that whole “Mr. Roboto” thing. They should be banished forever for that…

Sting: Every time Sting actually moves toward rock and roll the critics herald it as a return to his “Police sound.” I’ve heard his new song, “I Can’t Stop Thinking About You.” Having heard it, I can certainly stop thinking about Sting. After a jazz-lite solo career, he careened into Christmas music and then did a Broadway play. Now I’m supposed to believe he’s going to rock? I doubt it. Time for rock’s most Pretentious Man to slowly fade away.

Billy Joel: It’s hard for me to believe that the last album of new material Joel put out was “River of Dreams” in 1995. The guy has loads of talent but has shut down on writing or creating new music. I think that contributes to the alcoholism but I’m no doctor. He’s an amazing concert draw, but when you stop creating as an artist don’t you die? Record something new Billy so I can take you off this list.

The Who: I saw the Who this last April and they were great. Zak Starkey does a great Keith Moon imitation. Pino Palladino, who Townshend said was “too cool for jazz” did a nice job filling in for John Entwistle. Pete seemed to be having fun despite himself. Roger was Roger. They did have a cadre of musicians on stage to augment their sound, never a good sign. The Who haven’t recorded anything since “Endless Wire.” I don’t know why these guys can’t get themselves into a studio, they killed it live. Townshend continues to say how “done” with the Who he is and yet he continues to tour, likely to placate Daltrey. I love these guys, but again, without moving forward creatively I have to question, why?

Did I miss any bands you think should hang it up? If I did, please add your thoughts in the comments.

Fall is finally here, my favorite season, indeed it’s the high, Holy season for Bourbon drinkers. Pour something dark and murky, put on some great rock and roll and enjoy the crisp weather and changing leaves.

2 thoughts on “BourbonAndVinyl List of Bands Who Sadly, Should Call It Quits”