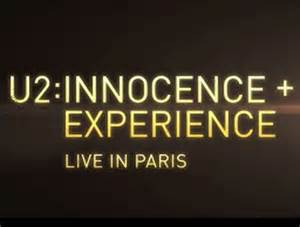 Like a lot of people I was devastated by the attacks in Paris on November 13th. Many bands, including U2, cancelled concerts and tours in the wake of the senseless violence. U2 was scheduled to do a live concert broadcast on HBO the same weekend that the terrorist attacks occurred. They ended up heading home, to Dublin, for what was supposed to be the end of this leg of the Innocence+Experience Tour. Instead of ending the tour, and I was delighted they did this, they returned to Paris on December 6th and 7th. I tend to agree with them that it was important for them to return to Paris as soon as possible.

Bono was quoted as saying, “This is the first direct hit on music”. He also said the band “couldn’t get back to Paris fast enough”. I think that is a fantastic sentiment! If there is any band who is perfect to take the stage at a moment like this, it’s U2. I remember seeing them several times in the US after 9-11 and it was an incredibly moving experience.

As a veritable soundtrack to all of our lives, I felt the music of U2 would be a salve, obviously not a cure, to this “direct hit on music” and on Paris. I tuned in Sunday night to see the first broadcast of the concert on HBO. It was nothing like being there, so this is not a review, but a recap. These are my reactions to watching it on TV from the safety of my couch, which as we all know at BourbonAndVinyl is nothing like being live at a concert.

They opened with the newer song, “The Miracle (Of Joey Ramone) from their latest album, “Songs of Innocence”. The song sounds nothing like the Ramones and frankly I never dug the Ramones, which is almost rock and roll blasphemy. However, the energy in the arena was palpable and the song got the crowd going. Following that they went back in the catalog for “Vertigo” and “I Will Follow” which really got the crowd on their feet. At this point, I was over the moon. This was truly going to be a special night for Paris – the special night they all deserve. I can’t say enough about the stage and the technological spectacle U2’s show is.

The rest of the beginning of the show continued with tunes from “Songs of Innocence”. They ran through “Iris”, “Song for Someone” and “Cedarwood Road” among others. At BourbonAndVinyl we’re all about established artists doing their new material. However, I felt my mind drifting during this part of the set. Part of the problem is that Bono kept doing these clunky, spoken introductions for the songs, giving them context. It reminded me of some footage I’d seen of the Who’s “Quadarophenia” tour where Daltrey felt compelled to explain the music. Like a joke, if you have to explain it, it’s not working. Probably the most effective of the newer tunes was “Raised By Wolves”. I will say that the fact that “Songs of Innocence” was framed by U2’s formative period which was informed by the sectarian violence of Ireland’s Catholics vs Protestants had some relevance to the Paris situation, but still something was lost for me. I was disappointed in the new arrangement of “Sunday Bloody Sunday” and more than a little horrified by the explosion sounds. I might have edited that out had I been them. It was powerful none the less.

When the show really turned around for me was when U2 climbed up into the “wall” or “tower” in the middle of their stage for a brief set. The effects and lighting were amazing. The song “Invisible”, which might be one of the best of their newer material was truly moving. It was riveting. The line, “their is no them” is so powerful. “There’s only us”. I love it.

Then they moved out to what I’d call the “B” stage and the momentum continued to build. I particularly loved “October” from their sophomore album and the rendition of “Every Breaking Wave” performed may be the most beautiful version of that song I’ve heard. I must admit, “Ordinary Love” would have also been perfect in that spot as well but now I’m just getting greedy.

The concert then hit high gear. They returned to the main stage for a run through some of their greatest material – “Bullet the Blue Sky” (I would have preferred Bono not use the megaphone, but I get the artistry of it), “Where the Streets Have No Name” (which always moves me to tears), “Pride (In the Name of Love)”. It was amazing. Bono kept saying, and this is a perfect sentiment, “Love is stronger than fear”. Bravo Bono!

They wrapped up with a powerful encore that started with “City of Blinding Lights” which would have benefited by not having the young dude on stage with Bono. Musicians, what are you gonna do? “Beautiful Day” was soaring as usual. The fact that they went all the way back to “The Unforgettable Fire” for “Bad” was an all time highlight for me. “One” was, as usual, emotional.

This concert proved that art, rock and roll and love are more powerful than anybody with a gun. Music heals. Music brings people together. Music makes life special. I applaud U2 and the Eagles of Death Metal for reminding us of those facts in the wake of the tragedies that occurred in Paris a month ago.

As U2 famously sang, “Don’t let the bastards drag you down”.