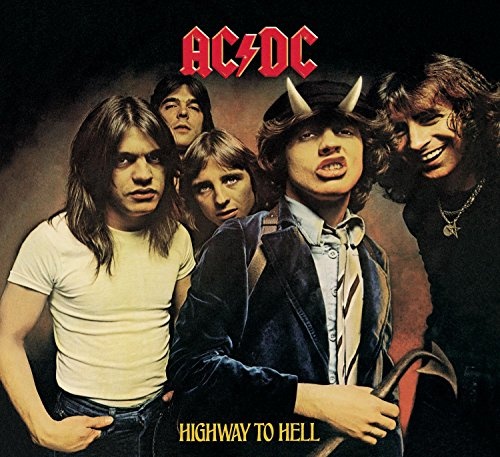 Not all heroes wear capes, people… Some don’t even wear shirts or if they do they cut the sleeves off and keep them completely unbuttoned, hairy chest out, gold chains proudly displayed, blues jeans pulled up to their navel to accentuate their…well, this is a family blog. There wasn’t a shirt out there that could contain the magnetism of Bon Scott. And in my case, I prefer my heroes a little sleazier and “bloozier” than Superman. As an aside, I’d be remiss if I didn’t mention the Rock Chick does a fabulous impression of Bon Scott…

I can’t believe AC/DC’s masterpiece, and sadly Bon Scott’s swan song, Highway To  Hell turns 40 this month. I think it was Bob Dylan who once sang, “time is a jet plane, moving way too fast.” I was in junior high school when this album came out. Although, admittedly, like most people in the United States, I was probably only aware of the title track, which was the only song the local radio station played by AC/DC. We knew “Highway to Hell” was a great song by a band whose name was slang for bisexuality but that was about it. Who were these crazed Vikings? From Australia no less?

It wasn’t until 1980’s Back In Black came out that we all discovered AC/DC for real. I’m frankly embarrassed to admit that it took us all a while to discover that there was a new lead singer in the band, so closely did replacement singer Brian Johnson sound like Bon Scott. Well, at least to our untrained ears. When Back In Black came out, I was old enough to drive but was rarely allowed to do so because of, well, beer. My friends and I were into sneaking out of our houses. We’d be home by curfew, wait an hour and then I’d hear rocks at my window signaling Brewster and Robert (names changed to protect the guilty) were outside ready for some miscreant bullshit. Those guys had sliding glass doors which made it easy to get out. I had to tip toe down creaky stares and unlock and open a back door whose hinges sang like a church choir. I remember one Saturday when some late night show as showing crude, grainy videos of AC/DC doing “You Shook Me All Night Long” and a few other tracks. I had to tell Brewster and Robert there was no way I was coming out. It was Brewster who said, “You know that’s a new lead singer right?” Revelations come in the darkness.

To this day, the Rock Chick prefers Brian Johnson AC/DC to Bon Scott AC/DC. The only album with tracks she likes with Bon on vocals is, not coincidentally, Highway To Hell. Although admittedly, I’m working hard to get her into Powerage, an overlooked gem of an album (LP Look Back: The Overlooked Gem, AC/DC’s “Powerage”). Like me, she loves the song, “Gone Shootin’.” In her defense, there is a real difference between the two singers. Brian comes across as a dirty old man. I always felt that Bon had a better sense of humor. He also brought a certain menace and bluesy vibe that is clearly distinguishable from latter day AC/DC. And let’s admit it, Bon does come across infinitely sleazier which for some reason I find appealing. The fact that the Rock Chick’s favorite Bon tracks are “Shot Down In Flames” and “If You Want Blood (You Got It)” fills me with pride. And she does a wonderful, comic impression of Bon Scott, gleaned from watching old video clips of him that I just love but I’m getting off topic here.

Bon was actually the band’s chauffeur when original singer Dave Evans quit AC/DC. Bon was quickly promoted to lead singer, quite a jump upward in stature. After Bon took over the lead vocals, AC/DC never looked back again. Bon was originally born in Scotland but his family migrated to Australia, exactly like the Young brothers, Angus and Malcolm, which instantly gave them something in common. After their first album, High Voltage, they became popular in Australia. With each succeeding album they got bigger and bigger around the world. The only seeming stumble on the road to superstardom was the aforementioned Powerage, which was a dark, little album. While Bon’s death after Highway To Hell has always imbued that album, and especially the title track with the mystique that Bon was prescient about his own death, I think Powerage was the signal he was in a dark place. The themes are all about desperation, drugs and poverty.

The album and the title track certainly got them a lot more exposure in the U.S. The band had gone to England to record the follow-up, this time with producer Mutt Lange when tragically Bon’s life was cut short. After a night out drinking, he passed out in the backseat of a friends car. His lifeless body was discovered the next day. The police ruled that he died of alcohol poisoning and called it a “death by misadventure,” which if you’re Bon Scott, is really the only way to go… the Rock Star way to go. There have been conspiracy theories about his death and how much of Back In Black he might have written ever since. Some questions, we’ll just never have answers to.

His final album as AC/DC’s lead singer was indeed his crowning achievement. The title track is one of the greatest rock songs of all time. There’s nothing like turning up “Highway to Hell” and driving down the interstate. Perhaps that’s why, inexplicably, I never purchased the album on vinyl. I bought it on cassette because I had to have it in the car. Years later I bought it on CD, remastered with beautiful sound. I have to put this on the list of used vinyl to look for.

We all loved that album, even the deep tracks. “Girls Got Rhythm” was always a favorite, with Bon’s usual flare for lyrics, “she’s got that backseat rhythm.” Which was sadly where most of us had our assignations with women back then…ah, high school. “Shot Down In Flames” could have been my college theme song. “Touch Too Much” has always been my secret favorite on that album. It was almost a pop song and the closest thing you’ll find to a ballad here. Bon didn’t do ballads, he only did blues tunes. Speaking of which, “Night Prowler,” the epic six and half minute track that ends the album, is a bluesy, “Midnight Rambler,” track about a serial killer that only Bon could come up with. “If You Want Blood (You Got It)” should be played in every football locker room before every game. It gets you up and ready for fighting.

This is simply one of the greatest albums ever. Every one should own this record and play it loud. From “Love Hungry Man” to “Get It Hot” there is not a bad track on this album. The fact that AC/DC found another great lead singer, and in a matter of months released the epic Back In Black in honor of Bon Scott is staggering. It’s the only album in their catalog that trumps Highway To Hell.

This is an album whose fortieth anniversary should be heralded as a major rock and roll milestone. Me, I might put this album on, turn it up, drink a little bourbon and sneak out after curfew for some miscreant bullshit… I wonder what Brewster and Robert are up to these days…”’cause I’m the night prowler, I sleep in the day…”