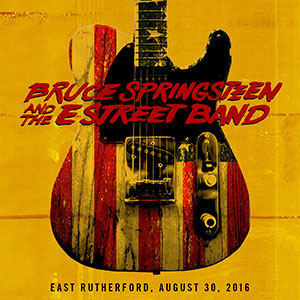 I have to say a big, belated Happy Birthday to Mr. Bruce Springsteen. The man turned 67 yesterday and shows no signs of slowing down. Having seen Bruce with the “legendary” E Street Band in April, I’m stunned he’s 67. Only Mick Jagger seems to defy age more than Bruce Springsteen. And you have to think in Mick’s case, he’s tethered to Keith Richards who hasn’t aged as… gracefully, but I digress. Springsteen is on a huge roll right now. He’s got a lot going on so I thought I’d catch everybody up.

First and foremost was his 2016 “The River” Tour, one of the year’s highest grossing tours. It was done in support of the excellent box set celebrating “The River” entitled “The Ties That Bind.” The box set had the double LP as released in 1979, the original single LP version of the album that Bruce submitted to Columbia but withdrew, entitled like the box set “The Ties That Bind,” and a disc of outttakes. “The Ties That Bind” was very similar to the great box set celebrating “Darkness On The Edge of Town,” named “The Promise,” after one of the great outtakes from those sessions. “Meet Me In The City” from the outtakes is a great, great Springsteen song. I will say , half of the outtakes had already been released on the previous treasure trove box set, “Tracks.” but I’m splitting hairs here. You need to hear all the tracks together to really frame the artistic period surrounding “The River.”

On the first American leg of “The River” tour, which is when I saw Bruce last, the band played the “River” album in it’s entirety, start to finish. It’s a dicey enterprise playing an entire album in concert. It either goes very well, like when I saw the Cult do “Love” or “Electric” or poorly like when I saw Motley Crue do “Dr. Feelgood.” It’s all about the album’s pacing. “Love” and “Electric” were non stop hard rock albums that held up very well in concert. I’m still baffled as to why “Dr Feelgood” didn’t translate as well live. There are some of my favorite Crue songs on that record, but the pacing seemed to lag on what would be side 2. The Rock Chick gave up on seeing Motley live after that, much to my chagrin… The Rock Chick’s likes and dislikes can be very mercurial… I wonder how long she’s going to let me stick around, but that’s another post… and I intend to stick for the long haul but I digress again. Must be all this traveling I’m doing… can’t stay focused.

“The River,” played straight through actually held up very well live. The album is paced well and highlights everything the E Street Band does well. There are barrel-house rockers and light-touch ballads. Springsteen’s intent when recording “The River” was to recreate the energy the band put off during live shows, so it makes sense that “The River” live would be fantastic. After the album was over, they played what Bruce was calling the “concert after the concert” which varied almost every night. I was pleased to finally see “Rosalita” performed live after all these years of attending Springsteen shows. That set after the album seemed to really spark the excitement in the band. I downloaded the free “Chicago” show and it’s a very strong live album. I began to realize the band was doing some of their finest live work in their career.

When the E Street Band got over to the European leg of the tour, the strictures of playing the entire “River” LP every night had gotten old and so they cast that aside. The sets he started playing in Europe were as varied and career spanning as I’ve ever seen. By the time they got back to the US, Springsteen was setting records for his longest shows and then breaking them on the next night of the tour. The set lists on these shows are staggering in their breadth and depth. What’s better still is that you can buy any or all of these great shows on brucespringsteen.net any time you want.

I picked up the August 30, Metlife Stadium show in New Jersey and it ranks amongst the best bootlegs I’ve ever heard of Springsteen. He opens with the obscure chestnut, “New York City Serenade.” Springsteen fans will all realize how special that song is, I don’t think it’s been performed since the 70s, but I’m no historian. He then went through a quasi chronological tour through his entire career. He only played two songs from “The River” and neither was the actual song, “The River” which is odd considering the name of the tour but hey, he’s the Boss. He even dug into his “solo” period and played “Living Proof” which was a surprising highlight. I highly recommend checking out any of the shows on the tour after he’s returned to the US. I will warn you, the 8/30 date is over 4 hours, so strap in for a long listening experience but it’s worth every minute. He does most of “The Wild, The Innocent and the E Street Shuffle,” my favorite album by Bruce. You can even purchase all three New Jersey shows as one special package, but even I shy away from 12 hours of music from anybody… Do yourself a favor and check out these live recordings, it will reward you.

On top of all that activity, Bruce’s autobiography, aptly named “Born To Run” came out on Friday. I read a great interview with Bruce in Vanity Fair and it sounds like Bruce plumbs the depth of some of his battles with depression. It’s been described as being like one of his concerts: sprawling, ecstatic and epic. Here’s my problem. The rock and roll autobiography kind of got ruined for me by Keith Richards. I love Keith to death but his arcane writing about the different guitar tunings he used on certain songs was too much for even me. And he went on to comment on Mick’s penis… C’mon man, nobody wants you to go there. Someone gave me Pete Townshend’s autobiography but after Keith’s “Life,” I couldn’t bring myself to even open it. I’m on the fence about Springsteen’s book, because I think he’d be a better writer, but man, it’s a huge commitment.

The treat for me around this whole autobiography thing was that Bruce released a “companion” disc of tunes to go with the book. Two-thirds of these songs have been released on various albums and greatest hits so why bother? Well, he’s released five tunes from his pre-fame career. Two songs are by his first band, The Castiles. One song is from his outfit named Steel Mill. I’m not going to lie to you. The sound quality of these tunes is not great. These songs are for you completists out there – you know who you are – but I can’t recommend them. They’re solid, meat-and-potatos 50’s style rock. Nothing terribly revelatory there.

The two songs I would recommend are a solo song “Henry Boy” and a song credited to The Bruce Springsteen Band (his pre E Street configuration) named “The Ballad of Jesse James.” I really liked “Henry Boy.” It sounds like a left over from “Greetings From Asbury Park.” It’s all rapidly strummed acoustic guitar with words spilling out of Springsteen almost as fast as he can sing them. It’s a really nice addition to the catalog. The gem here, the song I absolutely love and consider a must-have for any Springsteen fan is “The Ballad of Jesse James.” That song is all pure 70’s rock. It opens with a giant slab of a riff and then Bruce hits you with a squealing almost slide guitar sound that kills. There are back up singers. The sound of this song is very much “of it’s time,” the 70s. It sounds like a song Gregg Allman could have recorded on one of his solo albums. The guitar solo is worth the $1.29 for the song alone. I have to wonder, where the hell did this sound go? He didn’t play guitar like this again until “Darkness On the Edge of Town.” The chorus, which I love, asks the question “Don’t you wanna be an outlaw?” The answer, as any B&V enthusiast must know by now, is yes, yes I do. Again, the sound quality is a little rough, we’re all used to highly polished, digitized music these days, but the sound of this one harkens back to hearing a vinyl record on a loud PA system at a bar having a drink-and-drowned night, all the beer you can drink for $5 and who doesn’t miss those days?

Put “The Ballad of Jesse James” on the stereo, slip on your old bell bottoms and dance around like you ain’t got no brains and celebrate Bruce’s Birthday. Happy Birthday Bruce, and many more to come. Here’s mud in your eye! Cheers !