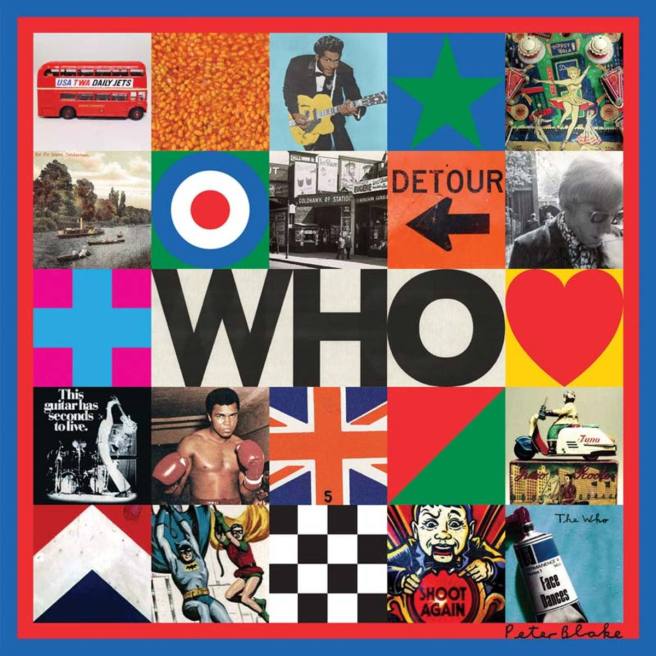 I, for one, was really bummed when the Who called it quits in 1984 after the tepid live album, Who’s Last. They’d released two albums in the early 80s that I really enjoyed. Although, in retrospect, perhaps those LPs weren’t up to their “classic” standards. To be honest, the first Who album I ever bought was Face Dances, an album I remain fond of to this day. I loved “You Better You Bet” and “Another Tricky Day.” I still quote the latter song when friends are having a tough time… “this is no social crisis, this is you having fun…”

Even I will admit 1982’s It’s Hard was not a great Who album. I did love the title track. And the single, “Athena” still holds some charm for me. And of course, I can still remember being on kitchen duty, sweating to death over an industrial dishwasher and having the crew chief put “Eminence Front” on the boom box and turning it up real loud. Everybody in the kitchen swaying and nodding to the music. Townshend isn’t fond of that song but everybody else on the planet loves it. Sorry, Pete… I even liked the video for that song, which is almost embarrassing to admit these days.

One of the reasons people frowned on those last two Who studio albums was because the Who, unlike Zeppelin, decided to carry on without their drummer. Keith Moon passed away after the album Who Are You and many folks thought the Who lost a lot of their power. Kenny Jones of the Faces joined but he was a much more economical drummer, much different than the sound Moon generated. It didn’t help that Townshend had also launched a solo career (his first three albums are essential listening) and was also mired in a bad heroin habit.

It was probably inevitable that the Who would reunite, they were far from spent creatively. I finally saw them in concert for the first time in 1988 when they reunited and pulled together a giant ensemble of a band and did a stadium tour. Townshend was struggling with his hearing loss and only played an acoustic guitar. There were like 30 people on stage with them on that tour but they still conjured some of the sturm and drang of their glory days. That was only the first of many reunion tours of course. They’ve toured on Tommy and Quadrophenia alone. I saw them in 2000 in Denver with my friend Stormin’, and it was just Townshend, Entwistle, and Daltrey with Ringo’s son Zak Starkey on drums and it was phenomenal. It was like it was 1975 again. Zak drums more like a Moon than a Starr, if you get what I mean.

At the time, I just kept thinking, when are these guys going to get into the studio and record a new album? Townshend is a songwriting genius and the band sounded great with Zak on drums, why not? Then, sadly John Entwistle passed away in Vegas on coke, which is the way rock stars should go, if you ask me, and that seemed to forestall any new music from the Who. Luckily the Who soldiered on with Pino Palladino on bass.

We finally saw the first new music in over 24 years from the Who in 2006 (save for two singles on a greatest hits compilation, “Real Good Looking Boy” about Elvis and “Old Red Wine” for Entwistle), when they released the concept album, Endless Wire. Well, I call it a concept album but the first half was a collection of songs and the second half was a mini-opera (Townshend is so fond of his operas), called “Wire And Glass.” My college roommate Drew, who expanded my love and knowledge of the Who, loved Endless Wire. I trust Drew’s musical instincts implicitly, especially about the Who, but the album left me somewhat cold. It just didn’t feel like the right way for the Who to hang it up on.

Over the last several years I keep reading comments from Daltrey that his voice is eventually going to fail him. He’s been trying to keep working, within or outside the Who to keep his “instrument working.” I get that. He released the great collaboration album with Wilko Johnson, Going Back Home, which everyone should own. He’s toured with the Who and on his own to keep his voice up. He also released a solo album last year, As Long As I Have You, which was heavy on soul covers. Daltrey almost scrapped the project but Townshend heard some demo’s and volunteered to play rhythm guitar on the album.

I don’t know if that was the spark that led them back into the studio as The Who, but whatever led them there, I’m just glad they’ve got an album coming out. I’ve heard the rumbles about their age or that there are only 2 original members left etc etc. As long as Townshend can write songs and Daltrey can shout them, I say carry on lads! As Elton John once said about the Stones, would any one have had the balls to tell Muddy Waters he was too old to go on? Muddy would have pulled a razor and cut a fool for saying that to him… well, Howlin Wolf certainly would have had a razor, maybe not Muddy.

The Who have released the first single from their upcoming album WHO entitled “Ball And Chain.” There is some subterfuge here as the song was originally put out on a Pete Townshend greatest hits package a few years ago, with Townshend on lead vocals under the title of “Guantanamo.” Why they changed the name is anyone’s guess but this is a pretty politically charged track… maybe the name change helps with managing political backlash but still allowing Pete to get the point across. Townshend’s original track is almost all acoustic and his vocal is almost a growl. It was a track I liked enough to purchase when it first came out… Here is the original version:

“Ball And Chain” is a nice update of this track. Usually you see artists like Sting or Phil Collins remake solo versions of songs previously done with their band but in this case Townshend did the reverse and took a solo tune back to the band. While Townshend’s is almost all acoustic, this version has more traditional sounds we expect from the Who. It starts with a beautiful cascading piano. The first time I heard this I thought maybe Daltrey’s voice had finally gone Dylan on him and it was gone but on repeated listens I realized he’s just trying to approximate Pete’s growl on the original version. His singing is as strong as ever. There really is no better interpreter of Townshend’s vision than Daltrey. The chemistry remains impeccable. Unlike the laid back acoustic nature of “Guantanamo” Pete adds some fierce power chords to this track. I love his electric guitar on this song. It’s a tough, strident track. These guys still rock. It may not be “Won’t Get Fooled Again” but it’s still got that great Who bite. Where are the kids today writing protest music? I don’t hear any… Sigh. Here is the Who version:

Needless to say, we love this track down at B&V. I can only hope this portends a strong album… Any new music by legendary bands like The Who, Paul McCartney, or the Stones should be celebrated with a national holiday involving bourbon and dancing around. Which, ironically is how I’ll be spending my weekend…