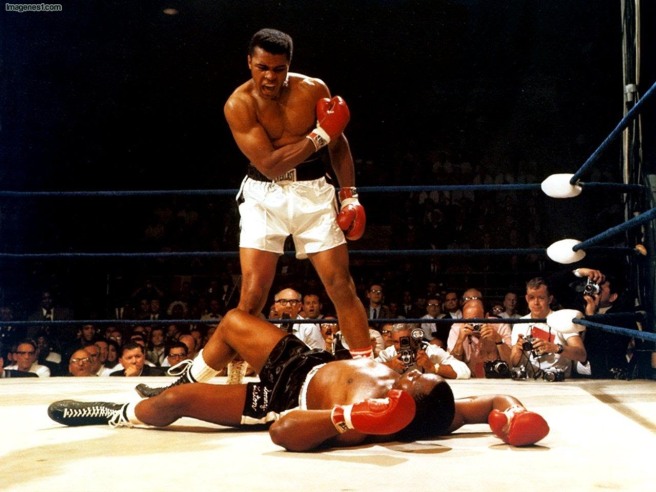 On rare occasions, world events cause me to pause here at BourbonAndVinyl, take off my head phones and pay attention. Today is one of those days. I awoke to the news that the Champ, Muhammad Ali had passed away. I went about my usual routine, breakfast and coffee, the gym, etc, but this overwhelming sense of sadness about Ali’s passing kept pressing on me. I felt compelled to sit down at the keyboard as I mourn yet another hero’s passing. And make no mistake, Muhammad Ali was a hero.

The sporting world doesn’t hold the magic for me that it used to when I was a kid. I am still a huge football fan, I often say if you’re not wearing a helmet and shoulder pads you’re not playing not a real sport. I have the misfortune of being a life-long Kansas City Chiefs fan. They’ve been breaking my heart longer than woman have… but that’s another story. Baseball lost it’s luster after the last MLB strike 20 years ago. Not even the Royals consecutive World Series appearances can get me interested. Basketball, I always hated. My father made me play 2 very embarrassing years “because I was tall.” That story is better left untold… every time someone threw me the ball I fell down, my coordination never did catch up to my height.

But it wasn’t always this way… sports was my first love, even before music. The only reason I turned on a radio in my early years was to listen to a sporting event. As a kid, in my house, boxing was as vital a sport as football, baseball or basketball. I can remember spending Saturdays watching ABC with Howard Cosell (who I still loathe, who announced John Lennon’s death on Monday Night Football by saying the world needed to “protect Paul McCartney,” what a douche bag). I can remember he and Ali verbally sparring and being simply mesmerized. Ali was one of my first actual heroes.

It was the Golden Era of Boxing. Titans prowled the ring: Ken Norton, George Foreman, and Joe Frazier. And the King of them all was Muhammad Ali. I don’t know anybody who wasn’t a fan of the Champ. His fights against Frazier had the drama and gravitas rarely found outside of Shakespeare’s plays. Those fights were the most epic in the history of boxing. It was Macbeth, Hamlet and an amazing left jab all in one event. There are arguments in every sport about who is/was the “greatest.” Not in boxing… there is no argument about who was the Greatest. Muhammad Ali is and will always be the Greatest boxer.

Since Ali, nobody, not Tyson, not Holyfield or anybody else has held the attention of the world the way Ali did. And I don’t just mean the boxing world, I mean the WORLD. The heavy weight class of boxing has virtually disappeared. The Rock Chick and I will Pay Per View a fight if Pacquiao is in it, but I don’t really know why. The power and the grace that was Ali has seemingly passed from this world…

Not only was he a hero to me in the ring, but he was outside the ring as well. He was a big supporter of the Civl Rights Movement. His religious convictions led him to protest the Vietnam War and refuse to serve. That decision cost him some of his prime boxing years as he was stripped of his title. Were it not for his rival Joe Frazier bringing him back from the wilderness he may have never recovered. Short of Pat Tillman, the NLF star who died in the Afghan war, I can’t think of another athlete who would put his convictions ahead of his sport or his livelihood. In all of these cases, Ali was on the right side of history.

His wit, his bravado, his sheer strength and his mastery of the pugilistic arts will never be seen again. “Float like a butterfly, sting like a bee…” Now he floats with the Angels…

RIP Muhammad Ali. The Champ, The Greatest, my Hero.

It’s a dark ride folks. Take care of each other out there. Cheers!