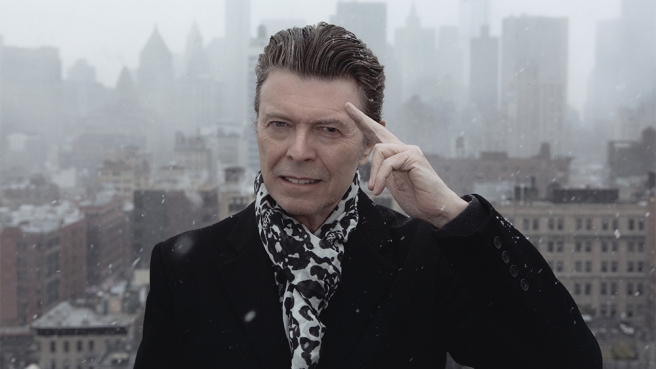 Like most red-blooded American males last night, I rushed home from work and staked out a spot in front of the television. I’d been looking forward to last night’s viewing for a couple of weeks… I was tuned in and psyched to see the Francis Whatley HBO documentary on David Bowie, ‘The Last Five Years.’ Oh, wait a minute, I think there was a football game on last night too. Yeah, I didn’t have a dog in that hunt and after my horrid Chiefs’ playoff debacle, it was just too soon for more football.

As any of you who have read B&V are likely aware, I’m a huge fan of David Bowie. I still can’t believe he’s been snatched away from us. Last night would have been his 71st birthday. Two years ago on his birthday he surprised us with his brilliant final statement, (ala Warren Zevon’s The Wind), the album Blackstar. I was in the process of pouring over that record and preparing my review, when two days later, on January 10th he passed away.  My review of Blackstar turned into part review, part obituary. (The Loss of a Titan: Bowie, #RIPBowie). Last year, on his birthday he once again surprised us with an EP, consisting of his last 3 tunes (along with “Lazarus” a Blackstar track) called No Plan (Review: David Bowie, The New “No Plan” EP, With His Last 3 Songs). It was then that I started to think that January 8th to January 10th should be some sort of religiously observed holiday, like Lent. Except instead of giving something up, everybody should listen to David Bowie for three days and do something completely unexpected. Maybe next year I’ll show up in the office in full kabuki make-up and a skirt… It’s just a thought.

I was wondering if the Bowie estate might surprise us with some new music from the vaults this year, but alas, no. They’ve been doing some great reissue work with Bowie’s back catalog, including the interesting Gouster. Instead, HBO aired this new documentary, ‘The Last Five Years’ which is a sequel of sorts to Whatley’s first Bowie documentary, ‘Five Years,’ named after one of Bowie’s Ziggy-era, iconic songs. ‘Five Years’ was focused on Bowie’s early years, and the 5 years in question weren’t sequential. The documentary merely highlighted key years during Bowie’s “heyday” in the 70s. What I liked about ‘The Last Five Years,’ and believe me, I liked it, was that this documentary actually was the sequential account of the last five years of Bowie’s life, which considering the lyrics of “Five Years” seems more appropriate, “we’ve got five years, that’s all we’ve got.” I think this documentary was produced a few years ago, but I believe last night was the first wide-spread showing in the U.S.

B&V has always been focused on artists who have been around for a while and the latter work in their catalog. That may be why I found ‘The Last Five Years’ so fascinating. I would say it’s a “must-see” for Bowie fans, and music fans in general. There is a lot of older, unseen footage from the 70s to help augment the story. So for those of you who are only into early Bowie, there’s something of interest here for you too. There is a lot of Tony Visconti, Bowie’s long time producer, friend and erstwhile bandmate sitting at the production console, pulling up vocal tracks. Bowie’s backing band is in the studio and jams along live to his recorded vocal tracks, and discuss how they came up with certain parts of certain songs, which is fascinating.

The documentary starts with what it calls a “prologue” that jumps back to 2003/2004’s A Reality Tour, in support of the album by the same name. The Rock Chick and I were lucky enough to catch that tour on May 10th, 2004 here in Kansas City at the beautiful Starlight Theater. I was really getting deeply back into Bowie. After the 1984 album Tonight (which wasn’t as bad as people say it was, it was just hard to follow up Let’s Dance with anything that wasn’t going to be a letdown), I lost touch with Bowie. Every now and then I’d hear a song that would penetrate my consciousness, like “I’m Afraid of Americans,” or “Absolute Beginners,” but as far as buying Bowie albums, I’d basically stopped. Then I heard 1999’s Hours and I was back in the bus. That album is criticized for Bowie being more craftsman than visionary, but it’s still a great record. I don’t care if most of the music was used in a video game. Bowie followed that up with one of his finest albums ever, Heathen. That is a must-hear for every Bowie fan. When Reality came out in 2002, I eagerly snatched it up and paid top dollar to see that show. It was amazing… He opened with “Rebel Rebel,” played a lot of music from Heathen and Reality (which older artists never seem to do, play the new stuff), and he played “Station To Station” in it’s entirety. He was confident, charismatic, and seemed to be really enjoying himself. The Rock Chick had to drive home that night, I was too staggered by what I had just heard.

Unfortunately, Bowie had a heart attack later on during that tour, and that was it. He never toured again. In fact, he went into seclusion. After the prologue around the A Reality Tour, ‘The Last Five Years’ follows Bowie’s seclusion from 2004  to 2011 when no one heard from him. He was the happy family man/hermit. It was in 2011 he finally began to reach out to his old band and Visconti… the next thing they knew they were all signing “non-disclosure” agreements and jamming with Bowie in the studio. The result was the fantastic The Next Day which, while nostalgic, is never maudlin, and looks back to Bowie’s Berlin days. I was fascinated to see details of how Bowie wasn’t just concerned with the music, he was concerned with the visuals – the album cover and the videos for the three singles, (“The Stars Are Out Tonight,” “Valentine,” and “Where Are We Now?”. He was the complete artist. Every detail came under his scrutiny. Bowie neither did interviews or toured for the album.

Shortly after that, Bowie took an acute interest in jazz. He reached out to jazz composer Maria Schneider and hooked up with saxophonist Donny McCaslin and his band to record some really different, dissonant, crazy jazz tunes “Sue (Or In A Season of Crime)” and “Tis a Pity She’s a Whore.” The documentary does a good job in positing the theory that Bowie was probably always into jazz under the surface and compares it to his experiments with new sonic textures from his Berlin days… It’s an intriguing argument.

Bowie then enlisted Donny McCaslin’s jazz band to record Blackstar. It’s cool to see the jazz band jamming in a dive bar, playing tunes they played with Bowie, over his vocal tracks. Both McCaslin and Maria Schneider talk about Bowie’s willingness to explore and stretch out the norm. I defy you to find an artist in his 60’s whose willing to take so many risks.

Finally, it was on Bowie’s bucket list to do a musical. The documentary also suggests this is something Bowie had in mind for a long time. His original concept for Diamond Dogs was to set Orwell’s ‘1984’ to music. Most of the concerts for Diamond Dogs were highly choreographed, something you didn’t see a lot of in the 70s… That footage, of those shows, is wild. The crazy stuff on stage, considering all the drugs being done, is pretty impressive. From there it leads into interviews with Bowie’s collaborators and cast of his musical play, ‘Lazarus.’ It was based on Bowie’s movie from the 70s, ‘The Man Who Fell to Earth.’ I thought the creative process and the work Bowie did on the play was another fascinating part of this documentary. The guy was a renaissance man.

It’s not new music, but another Bowie Birthday gift, the excellent documentary ‘The Last Five Years.’ If you dig music, and lets face it, it’s too cold to go outside, pull this up on HBO. When your’e done, you’ll probably be like me, listening to the albums mentioned and wearing kabuki make up… Just til tomorrow… It’s Bowie-Lent.