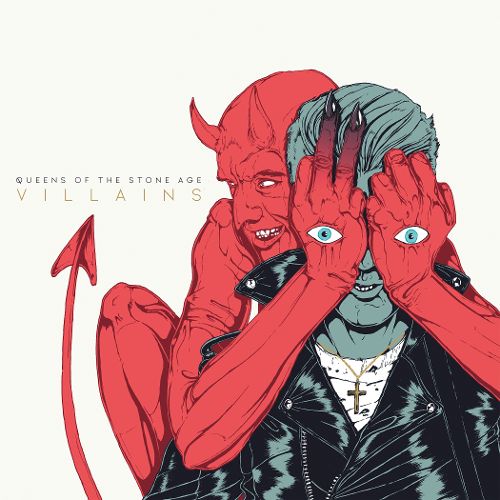 I should go on vacation more often… I leave town to visit the in-laws and a slew of new music gets released. I’m not sure if I’m willing to suffer through another one of those trips even if it does mean a lot of new music… I can only take so many for the team, folks. I know I’ve been posting quite a bit lately but with all this great new music, I’m lucky just to keep up. As my buddy Matthew said to me when I was in Denver, “I can tell this is your passion…” Indeed.

One album I was really looking forward to hearing was ‘Villains’ the new QotSA LP. I absolutely loved the first single, “The Way You Used To Do” reviewed previously on B&V (Queens Of The Stone Age Release New Single, “The Way You Used To Do,” And Save Rock n Roll). My friend Drummer Blake says Queens are too musician-y for mass consumption but I tend to disagree. Yes, these guys are such master craftsman it would take an actual musician to understand what they’re doing sometimes but their last few records have been catchy as hell.

I had an odd introduction to QotSA… I was driving in my car and for once I was tuned into the local alternative rock station, “The Buzz.” When I was growing up, if a new album came out by a big band, the DJ would scrap the programmed stuff and drop the needle on the new vinyl. You could hear a brand new record the day it came out just by turning on the radio. In these days of pre-programmed, corporate owned radio stations, you’re not gonna hear that happen much any more. Hence, I’ve given up on terrestrial radio… Anyway, this DJ, Afentra announces they’ve got the then new Queens’ LP, ‘…Like Clockwork’ and much to my surprise, she played the whole album. I had to pull the car over. What I heard that day blew my mind. ‘…Like Clockwork’ plays to me like a Pink Floyd record, you need to hear the whole thing together as a suite. Well, almost, I can listen to “If I Had a Tail” or “I Sat By the Ocean” or even “My God Is the Sun” and enjoy it, but listening to the whole thing is the best way to experience it.

‘…Like Clockwork’ had a murky, ominous feel to it. Josh Homme, the leader and only permanent member of Queens had just survived a knee surgery that went bad, where his heart actually stopped beating. Then he suffered from a horrible auto-immune infection afterward. ‘Clockwork’ sounds like an “airing of the grievances” kind of album, especially “Fair-weather Friends.” I was blown away. Although I shouldn’t have been surprised, I was a big fan of Homme’s work on Iggy Pop’s ‘Post Pop Depression,’ that came out shortly afterwards. That was an inspired pairing, QotSA and Iggy… Homme brought out Pop’s best music in years. (Review: Iggy Pop, “Post Pop Depression”)

Naturally, hearing ‘Clockwork’ sent me back in their catalog. I landed on ‘Songs For the Deaf.’ Holy crap, that thing is a hard rock masterpiece. The album practically shrieks out of the speakers at you. Although the guitars are hard and loud, they’re kind of droning. It’s hypnotic in a way. “No One Knows,” “Go With the Flow” and “First It Giveth” are amongst my favorite tunes. Comparing ‘Songs For the Deaf’ to ‘…Like Clockwork’ is virtually impossible… It’s hard to believe those two records came from the same band… What can’t these guys do? With all that as a backdrop, I was looking forward to the new album, but I  had literally no expectations.

I read recently, probably in Rolling Stone that Josh Homme doesn’t want to hear anybody say that rock is dead. He’s willing to punch record company guys in the face if they so much as hint that they think it. Homme is a pretty big guy… best we not test him on this. However, seeing him in the Eagles of Death Metal documentary, “Mon Amis” I think Josh is a pretty good, stand-up guy…he’s certainly a good friend to have… but still, I don’t want him to punch me but I do worry about rock these days. I must admit, when I heard he’d hired Mick Ronson, who has produced Bruno Mars to helm this project, it raised an eyebrow for me. Is this going to be QotSA’s ‘Emotional Rescue’ or “Miss You,” a foray into dance music? I tried to imagine QotSA doing a hard edged “Do Ya Think I’m Sexy”… the horror, the horror. I needn’t have worried. Rock will always be safe as long as Josh Homme is around.

The first two tracks on this album “Feet Don’t Fail Me” and “The Way You Used To Do” are big rocking tunes that groove. Yes, you can even dance to them if you’re so inclined. Myself, I gave up dancing years ago… paramedics always seem to try and force wood between my teeth when I do… While I love both those tunes, I really like the song “Fortress.” “If ever your fortress caves, you’re always safe in mine” sounds like the encouraging words of a father to a son. It’s a mid-tempo thing with a great guitar riff. The drumming on this record is sensational… I don’t know if it’s Homme or Jon Theodore who is listed as the QotSA drummer these days. Troy Van Leeuwen is listed as guitarist, Dean Fertita is on keyboards, and Michael Schuman is on bass. I’ve always thought of Queens as more of a musical collective than a band…

“Head Like a Haunted House” almost sounds like a harder rocking B-52’s song. There’s a great variance in the styles on this short set of nine tunes. Gone are the ominous, dark tones that graced ‘…Like Clockwork.’ QotSA are ready to party on this record. I don’t know how many times I’ve reviewed albums on this site and said, “well, this album is great, but you can’t really play it at a party…” This album, you can definitely play at a party… Well, I could, but most my friends are music nuts like I am. “Un-Reborn Again” is another stylistic turn and almost sounds like glam rock… the cadence of the lyrics are almost Bowie-esque. Well, I say that until he actually quotes the Georgia Satellites in the middle of the song. It’s that kind of “fuck all,” freewheeling album. This is fun music.

“Hideaway” is another standout track near the end of the record. It sounds like a modern spin on the Animals or the Zombies. It has that 60s guitar/keyboard vibe to it. It’s another great tune with a groove. I imagine a bunch of people on tequila dancing the Swim to this track. Yet even with all the groove I get from this record it most definitely still rocks. The guitar sounds go from fuzzy to beautiful leads all in the same tune.

“The Evil Has Landed,” which was the second single released prior to the LP, is probably the hardest rocking thing here. It wouldn’t have sounded out of place on ‘Songs For the Deaf.’ I love the riff on this thing. Homme’s lead guitar on this track is probably the most impressive on the album. “Close… come close…” he repeats… No thank you, Josh.

The album ends on the soaring “Villains of Circumstance.” It’s a great way to end the record… I can’t tell if it’s a love song to his wife or to his kids. (One might theorize that the titular ‘Villains’ Homme references might be his children…) It’s a wonderful tune and leaves me feeling 180 degrees different from how I felt after ‘…Like Clockwork.’ It’s impressive that a rock band/artist can put out such a wonderful variance of moods, tones and songs yet still keep that hard rock/guitar heavy sound.

This one gets my highest recommendation. It’s hard, it rocks, it grooves, it does a lot of different things. Turn this one up loud, invite over some friends, pour some tequila, mute the football on the TV and have a ball!